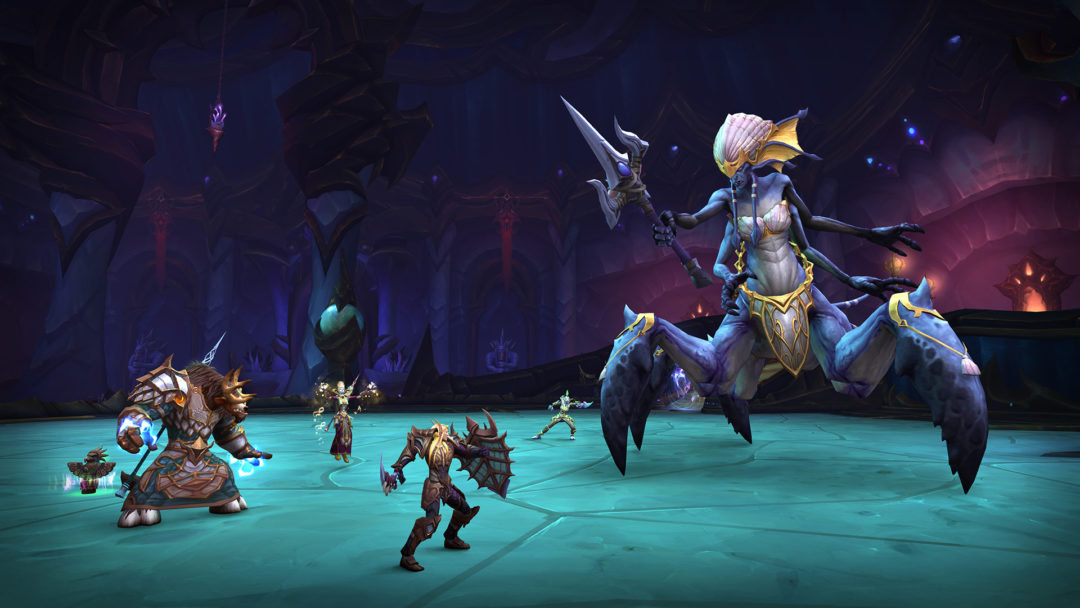 The biggest update to World of Warcraft: Battle for Azeroth so far was released today, and our friends at Icy Veins have provided a guide to the new features and changes that await in Rise of Azshara!

You can find a comprehensive list of all changes and developer comments in the official Patch 8.2 notes.

Flying in Kul Tiras and Zandalar

The legendary neckpiece is receiving a new avenue of progression in Patch 8.2. The new Heart of Azeroth system will provide additional power customization options through Essences, which can be collected by taking part in a variety of content. You will infuse them into the Heart of Azeroth using the rebuilt Heart Forge in Silithus. You will unlock the first Essence by completing a short introductory quest line, which is offered by Magni Bronzebeard once you’ve established a new hub in Nazjatar.

With a total of 21 Essences added to the game, Icy Veins has created Class Essence guides to help you pick the best ones for your class.

Mechagon is an island off the coast of Kul Tiras whose denizens have replaced blood and bones with bolts and brass. The zone is intended for endless roaming and exploration. It doesn’t have an emissary, as it’s the Timeless Isle of Battle for Azeroth.

The story revolves around helping Prince Erazmin and the Rustbolt Resistance end the reign of King Mechagon, who considers the Curse of Flesh a disease, which must be cured through transformation. Transformation is a sign of status in the society of Mechagnomes. Although no Allied Races are coming in Patch 8.2, datamining suggests that Mechagnomes will be an Alliance Allied Race in the future. Completing the Mechagon meta-achievement rewards an all-new mount called Mechacycle Model W.

Mechagon comes with Pascal-K1N6, a unique giant robot who will help you craft an arsenal full of equipment, toys, consumables, and more in exchange for Spare Parts and Energy Cells found across the zone.

Pocket-Sized Computation Device is a unique take on trinkets — it’s completely customizable using punchcards and you will receive it right at the beginning of your adventure.

On July 9, players will be able to access the Mythic-only eight-boss Operation: Mechagon dungeon. Check out the Mechagon Zone guide over at Icy Veins for more information about the new zone.

The Alliance and the Horde find themselves facing an ancient enemy who has long been lurking in the depths — Queen Azshara and her naga army.

Nazjatar is about two thirds of the size of Argus and its story revolves around the champions of both factions establishing their hubs and breaching the Eternal Palace by working together.

Blizzard is introducing a new type of armor called Benthic gear. The base item level is 385+ and the items can be upgraded using Prismatic Manapearls up to item level 425. You can collect Manapearls from outdoor activities in Nazjatar including world quests, killing rare creatures, and completing the Emissary quest.

Two new world bosses are available in Nazjatar, each dropping item level 415 loot. Check out the Nazjatar Zone guide at Icy Veins to learn more about the zone.

Azshara is the final boss of the new Eternal Palace raid, which houses eight bosses and opens on July 9. Mythic Difficulty and the first Raid Finder wing will be available one week later on July 15.

The third Battle for Azeroth Mythic Keystone Season is scheduled for July 9. After that the Season 3 affix will be available, dungeons will become harder and drop better loot, and new Azerite Armor will be purchasable from Thaumaturge Vashreen.

A new Nazjatar-themed affix called Beguiling will be available during Mythic Season 3 for Keystone 10+ runs. Azshara’s Emissaries will be present throughout the dungeon and there are three types of handmaiden, each with a unique set of abilities.

Blizzard is also increasing the item level and difficulty of all dungeons by 30 item levels.

Thaumaturge Vashreen will be selling new Azerite gear for Titan Residuum starting July 9. The price of random tokens will be as follows:

In Patch 8.2, the Profession skill limit has been raised to 175 (up from 150) for all Professions except Archaeology. You’ll gain the first 25 skill points in each Profession by disenchanting, milling, or prospecting items. New recipes and crafting materials native to Mechagon and Nazjatar are available from various sources. More details have been provided by Icy Veins below:

Gnomes and Tauren will be able to embark on an epic quest line for Heritage Armor in Rise of Azshara. You must be Exalted with the appropriate faction (Gnomeregan or Thunder Bluff) and have a Gnome or Tauren character at max level to be eligible for the quest line.

Each mount now has a Mount Equipment slot, which can be equipped with unique items that grant various effects to your mount such as water walking and being immune to dazing while mounted. The items are available from Professions and you will need to be level 100 to unlock the feature and level 20 to use the pieces. Water Striders have lost their innate ability to walk on water and Blizzard is sending a Bind-to-Account Mount Equipment to all Water Strider owners through in-game mail as compensation.

Magni’s effort to heal Azeroth continues in Patch 8.2 and the latest chapter of the War Campaign is available to level 120 players who have completed previous chapters and the “Clearing out the Cache” quest. Baine Bloodhoof has been trapped by Sylvanas and it is up to the heroes of the Alliance and the Horde to free him in the Stay of Execution Scenario.

Put your best battle pets to test in the all-new Pet Battle Dungeon with Normal and Challenge difficulties. You can find a list of all battle pets added in Patch 8.2 here.

Crestfall and Snowblossom Village are two new islands added in Rise of Azshara. Crestfall features elements of the Warcraft II map and Snowblossom is a Pandaren village where the inhabitants fight off vermin.

The Return of Ashran

Ashran is returning as a 40 vs. 40 Epic Battleground in Rise of Azshara.

We hope you liked our Survival Guide for Patch 8.2 and we’ll see you in Azeroth!

The Dead Don’t Die Murders Zombie Movies, So They Can Rise Again