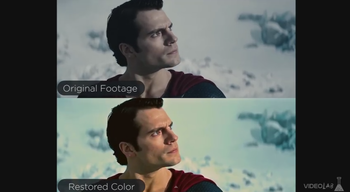 Zack Snyder’s Man of Steel had some obvious stylistic choices that helped it achieve the dark and gritty feel seen in the more recent DC superhero films, but what would it have looked like if Superman had a chance to really show off his iconic red and blue? The folks at VideoLab took it upon themselves to answer this question by adjusting the original film and providing a glimpse into a more vibrant Man of Steel.

The video’s description details out some specifics of the team’s work on adjusting the film. According to VideoLab,

“The results we achieved are obviously a bit oversaturated and contain contrast artifacts. Since our source footage already contained severe color-grading decisions, it was far from optimal and, at best, this is an approximation. If the raw footage had been colored in a more natural and pleasing manner, it would actually look SIGNIFICANTLY better than what you see here.”

Interestingly, they add that the “orange-tinted sky in the Metropolis aftermath shots and the purple girders behind Zod were actually there naturally. We believe Man of Steel had a more traditional-looking color grade until later in post-production when they decided to go darker.”

Watch the video below and tell us whether you prefer vibrant color or gritty darkness for Man of Steel.

Whatever side you’re on, make sure you check out the hilarious Batman v Superman/The Lego Movie mashup to get your gritty fix. Just trust me.

These Babies in Geeky Costumes are Cooler Than You