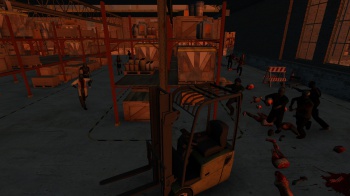 Warehouse and Logistics Simulator somehow found a way to get even more thrilling than the core forklift-operating experience.

The “Relatively Mundane Career Simulator” genre has inexplicably taken off, and the latest product of that trend is Warehouse and Logistics Simulator (yes, really). The game tasks players with the operation of a forklift as they complete various exciting tasks like moving heavy boxes. The core gameplay faithfully recreates a good day as a policy-obeying forklift expert, but what about the bad days? What about the days where you show up to the warehouse, sit down in your trusty forklift, and realize that you’re surrounded by the living dead?

Luckily for all of us, the developers have you covered. The Hell’s Warehouse DLC fills the aisles with ravenous zombies just waiting to be skewered by your heavy machinery. Throw your safety manual out the window, because the undead have infested the local docks and supermarkets and for some reason, you’re the only one who can stop them. Crates of produce are replaced with explosives for efficient zombie slaying in these depots of death.

In all seriousness, I’m not sure what to make of this – developer app2fun has combined the most over-crowded genre in gaming with what is probably the most obscure genre (with apologies to forklift enthusiasts – both of them). The original game was itself the punchline to a surreal unspoken joke, so I guess you can’t blame the devs for getting one more laugh out of it.

If you need more forklift action in your life, the game and its DLC are currently 20% off on Steam.