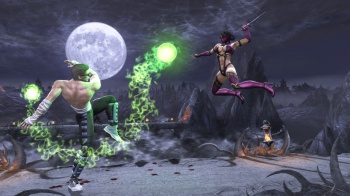 Warner Bros. Interactive is testing the might of Australia’s new videogame classification guidelines.

It wasn’t terribly surprising when Australia gave the thumbs-down to Mortal Kombat early last year, nor when the appeal that followed shortly thereafter was also denied. It’s a franchise that’s famed for its graphically violent content, after all, and the country’s classification board was notoriously twitchy about that sort of thing.

But it’s a new year, with a new set of rules that finally includes an R18+ rating for games, and so Warner is taking another run at it. “Warner Bros Entertainment Australia will be submitting the Mortal Kombat Komplete Edition for classification under the new R18+ classification category,” the publisher told GameSpot AU.

There’s no guarantee that the game will get the green light, since the R18+ category still allows for the exclusion of content that would earn an AO rating in North America. Even so, the great likelihood is that it will pass with relative ease, since Mortal Kombat would seem to be exactly the sort of game the new rating is intended to accommodate: violent – really violent – but also very popular with mainstream audiences.