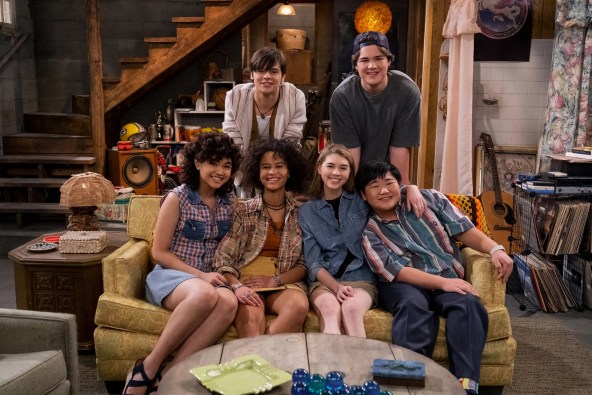 A List of the Cast of That ‘90s Show on Netflix

The main cast of the series, appearing in all 10 episodes of season 1, is as follows:

The show features Red and Kitty Forman, two returning characters, who are tasked with looking after their granddaughter, Leia Forman, for the summer. She, in turn, has her own circle of friends who get involved in their own shenanigans.

Red Forman is played by Kurtwood Smith who, despite his 40 years of TV and movie acting experience, we’ll always remember as Clarence Boddicker from RoboCop. Debra Jo Rupp has a similar amount of acting experience under her belt beyond playing Kitty Forman and recently featured in WandaVision as Wanda and Vision’s neighbor, Mrs. Hart.

The rest of the main cast are newcomers to the That ‘70s Show / That ‘90s Show universe. Callie Haverda is Leia Forman, the granddaughter in question. Mace Coronel is Jay Kelso, the son of Aston Kutcher and Mila Kunis’ characters and a potential love interest for Leila. Reyn Doi is Ozzie, Sam Morelos is Nikki, Ashley Aufderheide is Gwen Runck, and Maxwell Acee Donovan is Nate Runck, her brother.

Next, here is a list of characters from the original series who return in limited guest appearances:

You might notice there’s one missing character, Steven Hyde, who was played by Danny Masterson in the original That ‘70s Show series. Netflix, who is producing the show, hasn’t commented on his absence, but it’s almost certainly because of the sexual assault charges that have been brought against him.

Hypothetical future seasons of the series could introduce further characters or expand guest stars’ roles, but for now, that’s the full cast list for That ‘90s Show on Netflix.