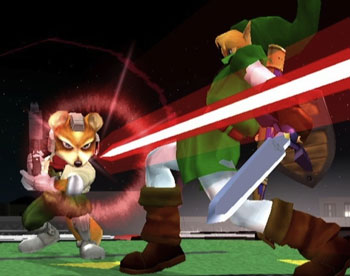 First up, from Kill Screen’s Joshua Calixto we find a compelling look into the fighting game community which has emerged around Super Smash Bros Melee and Nintendo’s resistance to acknowledging these hardcore players:

For [game director Masahiro Sakurai], Melee was more than a sequel, more than a game even. It was his idée fixe, his impossible ambition to create something infinitely deep and comfortably shallow at the same time. Now Melee has become his Pinkerton: A revitalized cult masterpiece, a bolt of lightning caught in a bottle, and the one puzzle piece that could fix everything… if it didn’t already belong to another era.

While we’re looking back, Play the Past’s Angela R Cox asserts that by categorizing games as ‘retro’ (aesthetically or chronologically), we fundamentally change what they are:

That is, when we consider a text as a socially situated object, we find that as textual practices change around a material (or digital, in the case of code) object, the text itself changes as cultural perception and use of the text changes.

Switching gears to look forward, on Media Diversified, Jordan Minor foresees a convergence of the afrofuturism aesthetic movement and a new wave of racially diverse games:

“Afrofuturism is the intersection between technology, black cultures, the imagination, and liberation with a heavy dose of mysticism,” says Ytasha L. Womack, author of Afrofuturism: The World of Black Sci-Fi and Fantasy Culture. “It is expressed through an array of genres including music and literature. It can also serve as the basis for critical theory around culture and/or race. It is a lens to see alternate realities through a black cultural lens.” And it is particularly prevalent in literature like sci-fi/fantasy novels and comics books, gaming’s geeky cousins.

[…] Adopting the aesthetic could also give games a chance to be at the forefront of black narratives, an area they are currently lagging behind in to say the least.

On the topic of emerging trends, but on the more commercial end of things, at Eurogamer the one and only Simon Parkin looks into a particular legal wrinkle in the growing world of Youtuber advertorials, in which some publishers or developers pay video producers for coverage.

Lastly, a big one: game developer Brendan Vance has released a 10,000-word tour-de-force on the intersections of games industry, consumerism, and spiritual wholeness. Summing it up could hardly do it justice, but here’s a choice excerpt:

We have hereby come to prefer our ‘content’ the same way we prefer our pig feed: Smooth tasting, from an Ikea-branded trough. Think about how a 19th century philosopher like Hegel might regard the concept of ‘replay value’. Would he commiserate with us about how the mind/spirit of romanticism just doesn’t make for large enough murals? Or would we have to pull out a bunch of obscure 21st century English words just to explain to him what the hell we were talking about? It’s important to realize that ‘replay value’ is not some timeless virtue sought by all media for all of history. It is a political viewpoint wrapped in a sales pitch perpetuated by people trying to improve the market position of their mass-produced entertainment products. By appropriating the word ‘content’, which denotes what we want, our intrepid capitalist marketers have steered us away from the conceptual, spiritual and artistic content Hegel envisions. All we want now is more stuff for a lower price.

When we observe today’s class of small, broke, powerless game studios subsisting from tiny mobile project to tiny mobile project, we typically attribute their existence to an apathetic audience and/or soulless business executives. We neglect to notice how convenient our ‘neutral third parties’ might find it that these developers are incapable of renegotiating the royalties they pay or, say, founding a new ‘ecosystem’ of their own. Today we see Valve travelling in the same direction as Apple, and we wonder whether Gabe Newell can ‘fix’ the madhouse (sic). If you’re Gabe Newell the madhouse is not broken.

Vance’s essay covers a huge swath of topics, from filler missions in Assassin’s Creed to larger economic realities which affect how we use and consume everything from games to Twitter. It’s a long read, but definitely worth your time to go through the whole thing.

Netflix Documentaries You Haven’t Seen, But Should