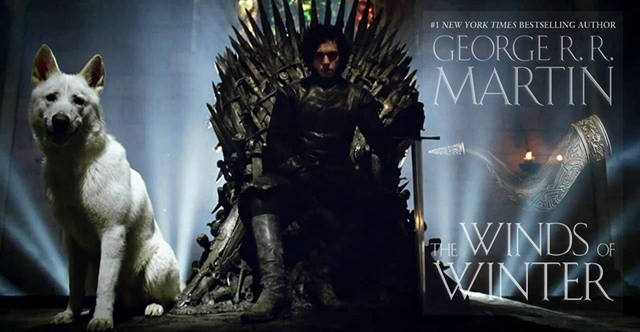 Amid years of speculation, finger pointing, and name calling, George R. R. Martin has finally stepped in front of his iron curtain. No longer does he choose to shield himself behind “It’s done when it’s done” vagary and has delivered the news everyone has been waiting for.

“THE WINDS OF WINTER is not finished.”

George R. R. Martin goes on to break down the timeline of deadlines he was given if he was ever to get the book published before HBO debuts Season 6 of Game of Thrones in mid-April. It did not sound forgiving. Not only that, as the stress of deadlines passing piled and the ocean of disappointment grew, his mood fell, making the writing even harder. Many of us can sympathize. He had every intention of making those deadlines, but he simply didn’t. And here we are.

With April fast approaching, and Bantam requiring a minimum of three months to publish a hardcover after final delivery, it looks like viewers, for the first time, will be ahead of the book readers.

“How you want to handle that… hey, that’s up to you,” says Martin. And it is. But maybe we should stop for a second and really think about the creative process and how two different type of media on the same thing can stand alone. To all the fans of Game of Thrones, whether it be written or otherwise, do you really want a sub-par product? After we have come so far with something we love, do we really want to see it compromised for our convenience? I don’t.

Will the show now spoil the story for those who love the books? “Maybe. Yes and no.” claims Martin. For me, that’s just fine. And it should be for you, too. The show and the books have and will continue to diverge and, in their life span, they will grow into different entities; creative works in their own right. That doesn’t necessarily make one of them bad, and it doesn’t make either more correct. It will simply make them different.

Many of you will still be disappointed – possibly angry. We can complain and resign ourselves to the fact that this type of outrage is a symptom of fandom or nerd culture, but that is simply not true. A Song of Ice and Fire is NOT unique in being optioned and adapted before the books were done. Fullmetal Alchemist and other anime have gone through this time and time again. And yet, the anime and the manga are allowed to stand on their own. They are allowed to both be great in their own right. You may prefer one over the other, sure. But you don’t claim the existence of one invalidates the other, do you?

Martin put it best when he closes his blog post with the following: “Which is a long way of saying, ‘How many children did Scarlett O’Hara have?'” Spoiler: Scarlett O’Hara had three children in the book and only one in the movie. The point is, they are both masterpieces on their own. When I was younger, I made a point to read Gone with the Wind because it was a classic. Then I saw the movie. I love them both differently. Just as I love the Game of Thrones show and novels differently. And if you’ve already watched the movie Gone with the Wind and loved it, I would still tell you to read the book. Just as I would urge viewers of the show the same and vice versa. It’s just more of a wonderful thing to love.

George R. R. Martin made a fantastic point evoking Gone with the Wind. Perhaps it is a point more of us need to remember. Being a fan isn’t restrictive or exclusive. There are no rules attached to loving a game, or a book, or a television show. We are free to love all facets of a thing while others are allowed to prefer or dislike only parts.

"Which is a long way of saying, 'How may children did Scarlett O'Hara have?'" – @GRRMspeaking on The Winds of Winter https://t.co/qXWkAhYifD— Janelle Bonanno (@s0osleepie) January 2, 2016