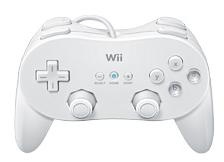 Digital distribution and the death of the Gamecube controllers are calling for a brand new Wii Classic Contoller to spread the WiiWare wealth to new Wii owners, and Nintendo has just the product.

The Wii Classic Controller Pro emulates the form factor of the Gamecube controller design more so than the original Classic Controller that was intended to be used for WiiWare titles. It features additional “ZR” and “ZL” shoulder buttons similar to the triggers on the Xbox 360 and Playstation 3 controllers. In every dimension, the Pro controller is built bigger: height, length, and width-wise. Added to its increased bulk are extended grip pads that look to be smoother and larger than the thin extensions on the Gamecube controllers.

Nintendo has the bad habit of throwing unadulterated peripheral concept parties in their office and actually manufacturing what they create. Between the Wii Classic Controller, Wii Remote, a nunchuck attachment, Mario Kart steering wheel, and the Balance Board, there never seems to be an end to Nintendo’s input products. Marketed correctly, this updated controller with improved usability and ergonomics, could be a key factor in convincing moms to test out Super Mario 64 for a small fee and a quick download.

Although no price has yet been set on the Classic Controller Pro, expect it to be released in Japan sometime in 2009.

Toys R Us Gets In On The Used Games Market