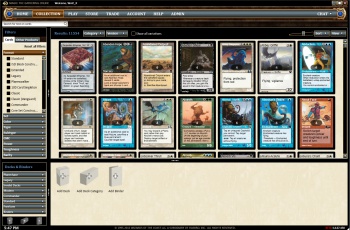 A company based in Texas has alleged that Magic: The Gathering Online infringes on its ‘Electronic Trading Card’ patent originally filed in 1995.

In a not uncommon, but nonetheless strange turn of events, Wildcat Intellectual Property Holdings is suing Wizards of the Coast for patent infringement for its game Magic: The Gathering Online. Wildcat is the holder of a patent for an “Electronic Trading Card,” and has been since that patent was issued in 2001. The “ETC” patent was first filed in 1995. Wizards of the Coast, meanwhile, opened its Magic: The Gathering Online game in 2002, and has operated it blissfully unaware ever since. Wildcat then filed suit last year against a multitude of companies, alleging violations of its “Electronic Trading Card” patent. The defendants in that lawsuit included Wizards of the Coast, Electronic Arts, Nintendo, Sony, and Zynga – 11 high profile companies in total.

Given that M:tGO has been printing money for Wizards for going on ten years now, just about the same amount of time Wildcat has actually had this patent, it’s hard not to question the legitimacy of the lawsuit. Even if the suit is legally sound, it’s likely that Hasbro’s lawyers, and Hasbro’s billions of dollars, will have something to say about a threat to one of their very profitable and long lasting brands.