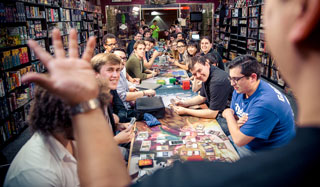 If you’ve got a friend you think would like Magic: the Gathering bring them out to Wizards’ Magic Open House to get them geared up.

Magic: The Gathering continues to be a juggernaut in the world of collectible card games, but even so, there are still many who have never given it a try. To reach out to those potential players, Wizards of the Coast has announced that it will hole a Magic Open House next month.

The idea is simple: If you’re a Magic player, and you know someone who isn’t, you can bring them out to your local game store for the Open House on April 15 (you can find yours using this tool). There, your friend can learn how to play in what Wizards calls, “a casual, low-key setting.” As a bonus, new players will get free cards at the event, and anyone who brings a friend will be rewarded with a special promo card.

In May, Wizards is rolling out another new event that is designed to get casual and hardcore Magic players playing together. Called “League,” it will task players with building a 30-card deck out of three booster packs from the new Amonkhet set, and then using that deck to play casual matches with other players in the store.

These sound like a couple of great opportunities to get your non-Magic playing with you, and you’ll both get some free cards to boot. You can find more information over on the official Wizards website.