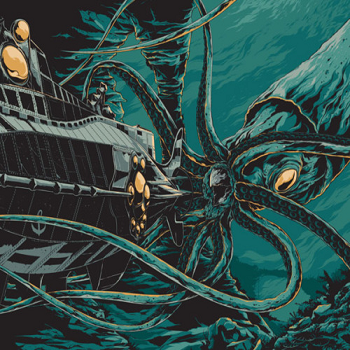 With X-Men: Apocalypse still months from hitting theaters, it looks like Singer might already have his next franchise lined up.

Disney’s 1954 adaptation of Jules Verne’s 20,000 Leagues Under the Sea remains one of the company’s greatest live-action movies for any number of reasons. Personally financed by Walt Disney himself, it boasted an all star ensemble cast including Kirk Douglas, James Mason, and Peter Lorre, but beyond that, the film’s beautiful set design has been cited as one of the early precursors to the steampunk movement. So I guess that technically speaking, we have it to blame for Will Smith’s Wild Wild West.

In any case, 20,000 Leagues is one of those properties that, while seeming perfect for a modern retelling — it’s got “franchise potential” written all over it — also demands a certain financial commitment that could be considered risky in even the most adept director’s hands. Look no further than how bad last year’s In the Heart of the Sea bombed, and that had both Ron Howard and Thor Hemsworth in its corner for Ahab’s sake.

(Yes, I know that Ahab wasn’t a character in ITHOTS, you buncha nerds.)

It’s a tough project to take on, suffice it to say, but it looks like 20th Century Fox has found the right guy to direct it in X-Men: Apocalypse director Bryan Singer.

As Deadline reports, the blockbuster director has been locked in to helm an adaptation of Verne’s classic story, with shooting expected to get under way in the fall. Said Singer, “I’m incredibly excited to be working with my friends at Fox, with whom I’ve had such a long and fruitful relationship.”

“Fruitful” is a humble way to put it — Singer’s Days of Future Past grossed nearly $750 million worldwide, and X-Men: Apocalypse looks primed to generate similar numbers, if not better.

“Ever since I was a boy and first discovered the 1870 Jules Verne novel, I have dreamt of retelling this classic story,” continues Singer. “Without revealing too much, it contains not only the original characters of Captain Nemo, Ned Land and Professor Aronnax, but also some new and original characters and Sci Fi plot twists culminating in a timeless adventure for all ages.”

Not to rain on his parade, but I didn’t see “a lack of characters” as an issue in 20,000 Leagues Under the Sea, nor the lack of “sci-fi plot twists.” Still, I guess it makes sense that he’d try to bring something fresh to the story — possibly one which appeals to those of you millennials who have never even heard of Jules Verne, Wild Wild West, or steampunk. Or steam, for that matter. (What? DONALD TRUMP IS STILL LEADING POLLS. All bets are off!!)

Given how poorly Singer’s last non-comic book adaptation was received, I just hope that these twists don’t require the superfluous use of CGI.

In other words, let’s hope this one doesn’t…flounder.

8 Short Films You Should Watch Immediately

These Films Should Have Won “Best Picture,” Rotten Tomatoes Says