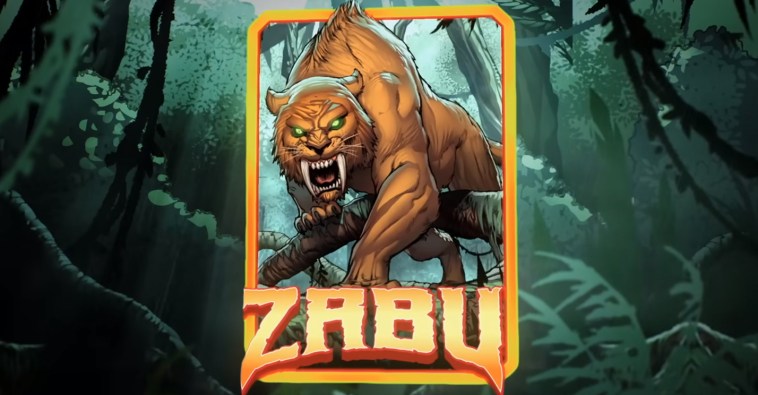 Some of the most powerful cards in Marvel Snap manipulate the amount of energy available to you or reduce the cost of cards. Among these, Sera has been one of the strongest – if not the strongest – Series 3 cards, reducing all cards by 1 energy and enabling decks with Silver Surfer and Patriot to have massive turn-6 swings. This month’s Marvel Snap Savage Land Battle Pass introduces another energy-reducing card in Zabu, a 3-cost, 2-energy sabretooth tiger that promises to define the meta with its powerful effect: “Ongoing: Your 4-cost cards cost 2 less (1 minimum).” If played optimally, this would allow Zabu players to slam down two 4-cost cards on turn 4 and upward of three on turn 6, leading to huge turns that opponents can’t keep up with. This guide will explain effective strategy for how to use or fight against Zabu decks in Marvel Snap, identifying deck strengths and weaknesses across Series 2, Series 3, and beyond.

As usual with battle passes, those with an extra $9.99 to spend get immediate access to Zabu along with a bunch of other goodies. Those that would rather wait for this orange kitty can unlock him at the end of the season, where the card will be added to the difficult-to-obtain ranks of Series 5 for a season before being downgraded into Series 3 at a later date.

Like Silver Surfer and other Battle Pass cards before it, Zabu can slot into Marvel Snap decks even if you’re at a lower collection level. Those below collection level 486 (Series 2) will have a handful of powerful 4-Cost cards that can utilize Zabu well enough to earn some cubes and climb the ranks. While still early, I expect Zabu decks in Series 2 to look something like this:

A common strategy with Zabu in all collection levels will see players using Moon Girl to refill their hand with 4-cost cards. An ideal game with this deck would see Zabu dropped on turn 3, then a discounted Moon Girl and something like Jessica Jones. Then on turns 4 and 5, counter cards such as Enchantress and Shang-Chi can interrupt your opponent, before finishing the game by dropping a whopping three 4-cost cards on turn 6. However, if Zabu isn’t drawn by turn 3, this deck also makes use of the tried-and-true Moon Girl into double Devil Dinosaur on turn 5 and 6. Both strategies will outpace most archetypes in Series 2, leading to some easy wins, but it’s reliant on drawing Zabu or Moon Girl – which the inclusion of America Chavez helps with. Truly, in this deck and others featuring Zabu, Moon Girl shines as the most synergistic card. 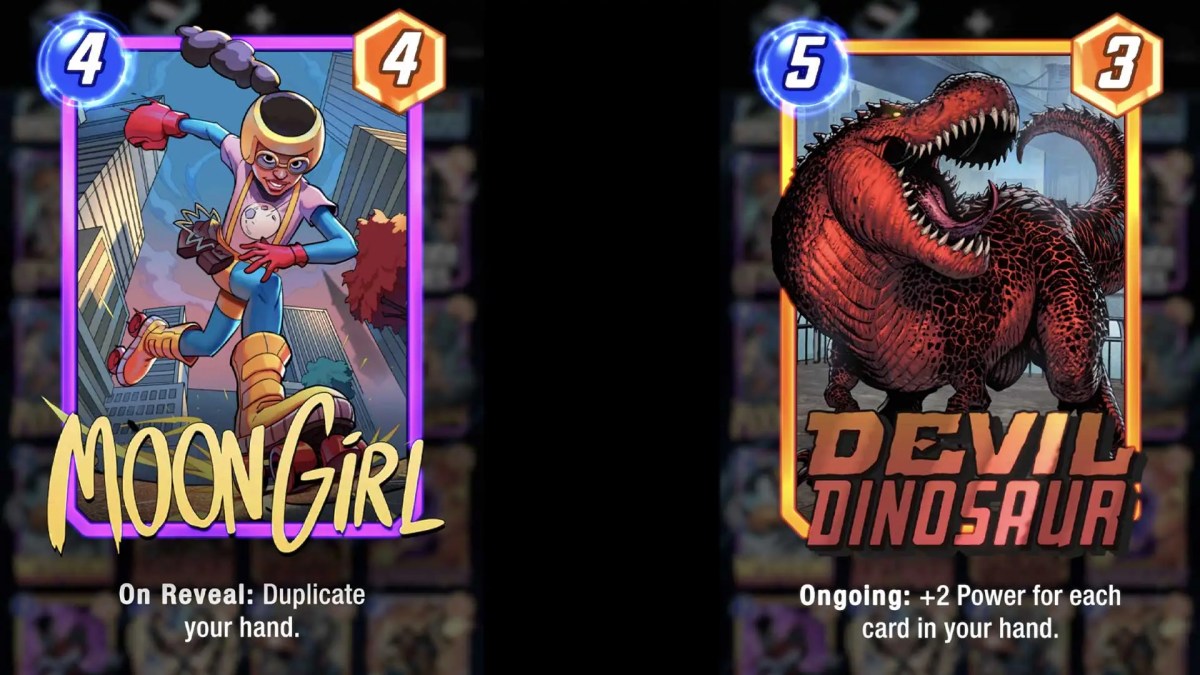 Early cards such as Scarlet Witch, Sunspot, and Cosmo can be swapped out for comparables such as Scorpion or Storm, though I’d recommend keeping Cosmo to protect your Zabu and Devil Dinosaur from an opposing Enchantress – more on her later. However, packing in all those 4-drops with Moon Girl is a necessity to make this deck work.

In Series 3 and beyond, Zabu has the potential to become a meta-defining force like we’ve yet to see in Marvel Snap. There are much more powerful 4-cost cards after collection level 468 to flood the board with. These include the likes of Wong, Rock Slide, and Series 4’s Absorbing Man. That said, some early theorycrafting relies on Zabu too much, which makes the decks quite inconsistent.

I lack the cognitive powers of Professor Xavier to tell you which Zabu decks will end up most powerful. The sabretooth tiger may wind up in more than a few decks with Sera or Mystique. With both Zabu and Sera on the board, this makes 4-cost cards cost only 1 energy, and so too does a Mystique that has copied Zabu’s ability. However, those decks seem far too greedy when Zabu alone can dominate. Expect early decks to look something like this:

In this Series 3 list, the goal is much the same as the Series 2 deck – draw Zabu before turn 3 with the help of America Chavez thinning out your deck, and then go to town dropping multiple discounted 4-cost cards on turns 4, 5, and 6. Goose becomes paramount to victory here as the smaller orange cat limits the lane it’s placed in to cards that cost less than 4, 5, or 6, which means powerful cards discounted by Zabu can be slotted in while ideally the opponent cannot play their heavy hitters there. Note that if you don’t have certain Series 3 cards such as Rock Slide, swapping them out for other 4-cost cards such as Enchantress works just as well.

While I’ve covered how Zabu has great synergy with Moon Girl, several other cards promise to make Zabu more menacing than he already appears in Marvel Snap decks. Series 4’s Absorbing Man, for example, can copy the On Reveal ability of Spider-Man to lock down two lanes, Moon Girl to re-refill your hand full of 4-drops, or to use Shang-Chi’s oppressive On Reveal ability twice. As Zabu decks will see you emptying your hand quite often, Crystal can refresh your hand if played into a middle lane if you run out of cards. And if you’re lucky enough to have the new Series 5 Darkhawk, many are theorycrafting that Zabu will work well with him, Rock Slide, and Moon Girl as a threatening core. Even more threatening are the possibilities with Series 4’s Shuri into something like Typhoid Mary, before managing that huge power stat with a Taskmaster. 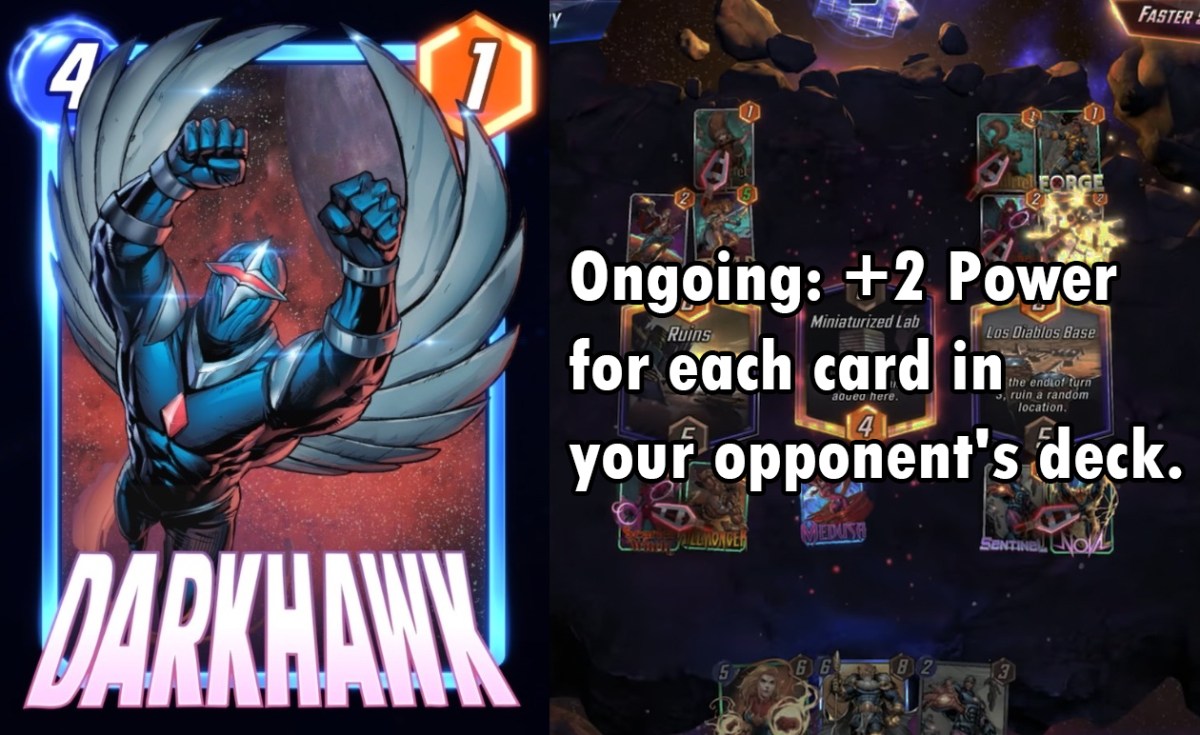 How to Counter Zabu Decks

That all said – how do you counter Zabu in Marvel Snap, other than hoping he’s sitting at the very bottom of opponents’ decks? This is where Zabu reveals both his true strength and weakness: Yes, Enchantress does stop Zabu’s Ongoing ability, but your opponent will still be able to play two 4-drops when you’re only playing one, gaining a possibly game-winning advantage. Cards such as Sandman, which limit the amount of playable cards for both players to one per turn, likewise appear too slowly to stop Zabu if he gets going. Yet at the same time, Zabu must be played on turn 3 for these decks to function properly, much unlike Silver Surfer decks that wait to play him until turn 6, allowing for a higher chance to draw. With America Chavez in a Zabu deck, it’s only a 54.5% chance to draw him in time, which makes this orange kitty somewhat inconsistent.

Strategy always evolves as a season progresses, but regardless, you now know generally what to expect from Zabu decks in Marvel Snap, including strengths and weaknesses. In short: Pray your opponent doesn’t draw Zabu if you’re playing against him, and pray you do draw him by turn 3 if you’re trying out this newest battle pass card this season.

Related: Who Has Initiative Reveals First in Marvel Snap on Twinfinite