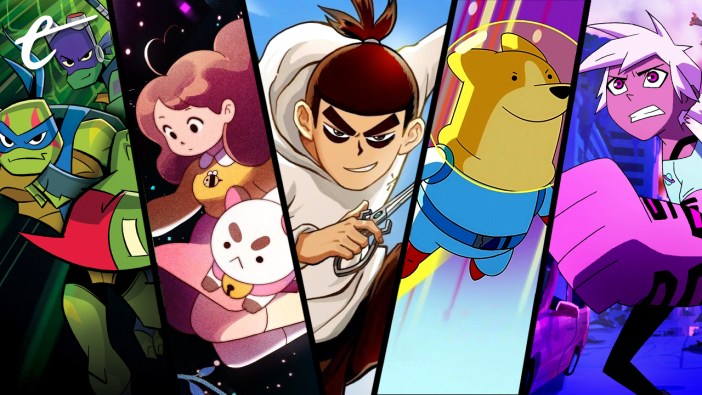 There’s been a lot of talk in recent times regarding the death of animation. In light of high-profile layoffs at newly merged Warner Bros. Discovery, which houses both Cartoon Network and Warner Bros. Animation, a host of upcoming cartoon series were either axed or left in limbo while existing shows were not renewed and weirdly dropped from its streaming service altogether.

But despite what feels like an attack on animation, particularly on original productions not tied to existing brands, there’s a host of high-quality content on rival services. I’m not looking at anime series though, as the success and popularity tied to that particular style of animation is kind of its own thing, and none of these series are exclusively aimed at adults. These are five cartoons available on Netflix that I think any adult can watch alongside their kids or even solo because of quality stories, great animation, or the holy grail combination of both. 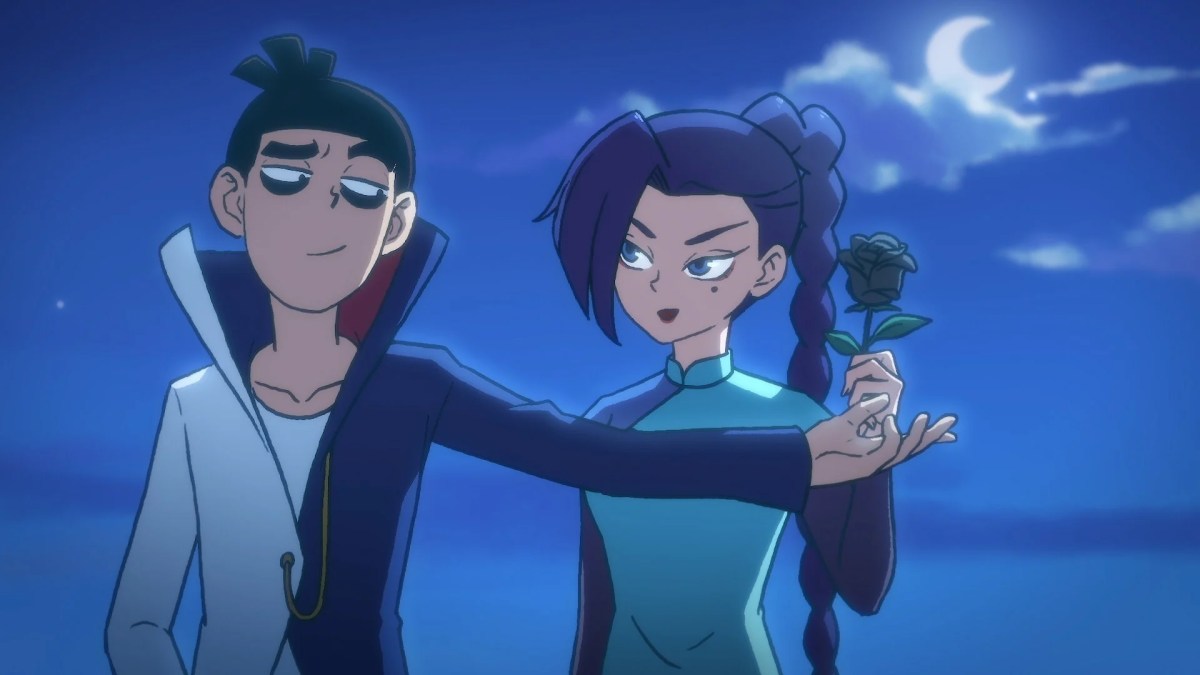 Scissor Seven is the first of many series on this list that takes heavy inspiration from Japanese anime. It’s a Chinese production from Aha Entertainment, with a crayon-esque art style that can surprisingly switch between goofy rigid slapstick and high-energy fluid animation. Seven is an amnesiac hairdresser that moonlights as an assassin living on an island with his chicken best friend / boss Dai Bo. While the two hatch harebrained schemes to make money, the ironically forgotten life Seven left behind as one of the world’s top-ranking assassins begins to catch up with him.

The serious tone set by highly dangerous murderers crashing up against the new ridiculous life Seven leads is effortlessly funny. But the series also displays a good amount of drama on occasion through the increasingly endearing cast of supporting characters that gradually get fleshed out. It also has a habit of unleashing amazing action set pieces out of nowhere, which solidifies Scissor Seven as a bonkers cartoon series firing on all cylinders on Netflix. 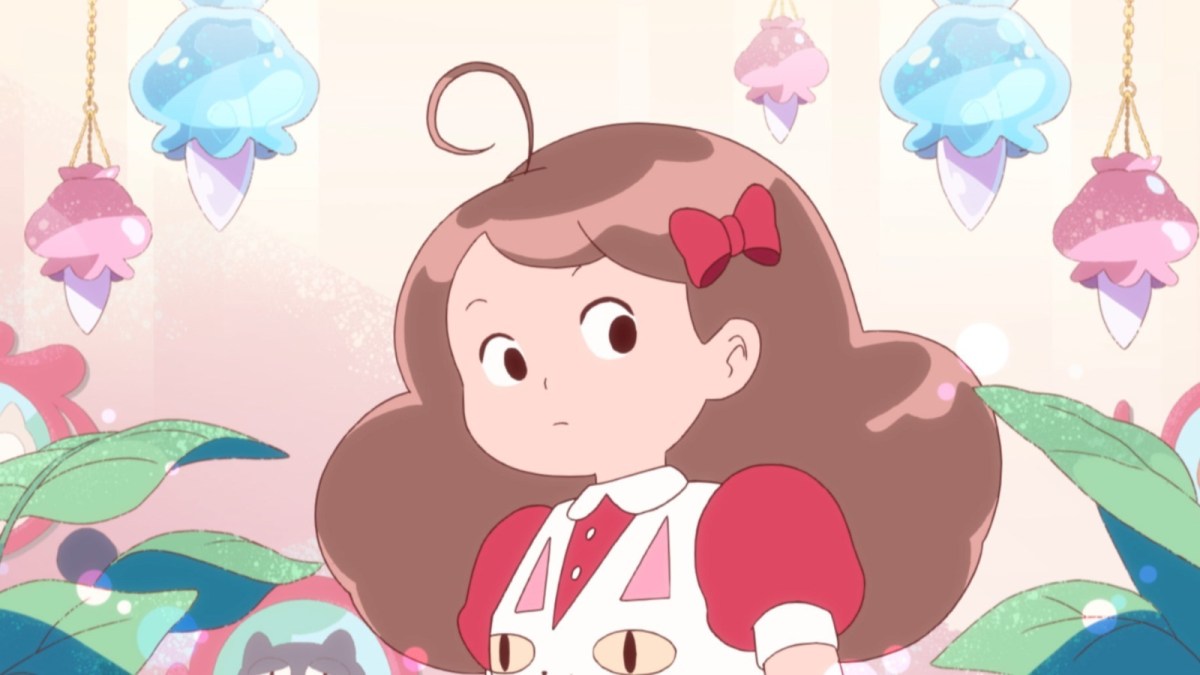 Bee and PuppyCat from Frederator Studios is a much more mellow series in comparison and has direct lineage to the 2010 mega hit Adventure Time, with creator Natasha Allegri having worked on that show. It shares many elements of the 2010s aesthetic derisively referred to nowadays as “CalArts Style.” But what that pejorative fails to capture is the overt cuteness and wondrous colorscapes that the show’s simplistic look uses to contrast underlying themes like loneliness, anxiety, and depression.

Bee is an aimless slacker who constantly fails to hold down work or take care of her responsibilities despite her best efforts. After being fired from yet another job, she is mysteriously granted a magical dog and/or kitten that she names PuppyCat. The two then take on magical temp jobs across an otherworldly realm called temp space to earn rent and become proper adults.

The show boasts incredible voice performances from well-known talent like Ashly Birch and Kumail Nanjiani as side characters, but surprisingly, mostly unknown Allyn Rachel and a Vocaloid program called Oliver are a powerhouse duo as Bee and PuppyCat who carry the series. I’ll readily admit that the series has a pacing issue, as it’s a revelation fest in its early and later episodes but meanders in the middle. But if you can forgive that, you’ll be treated to a lovely although very weird trip full of chill vibes. 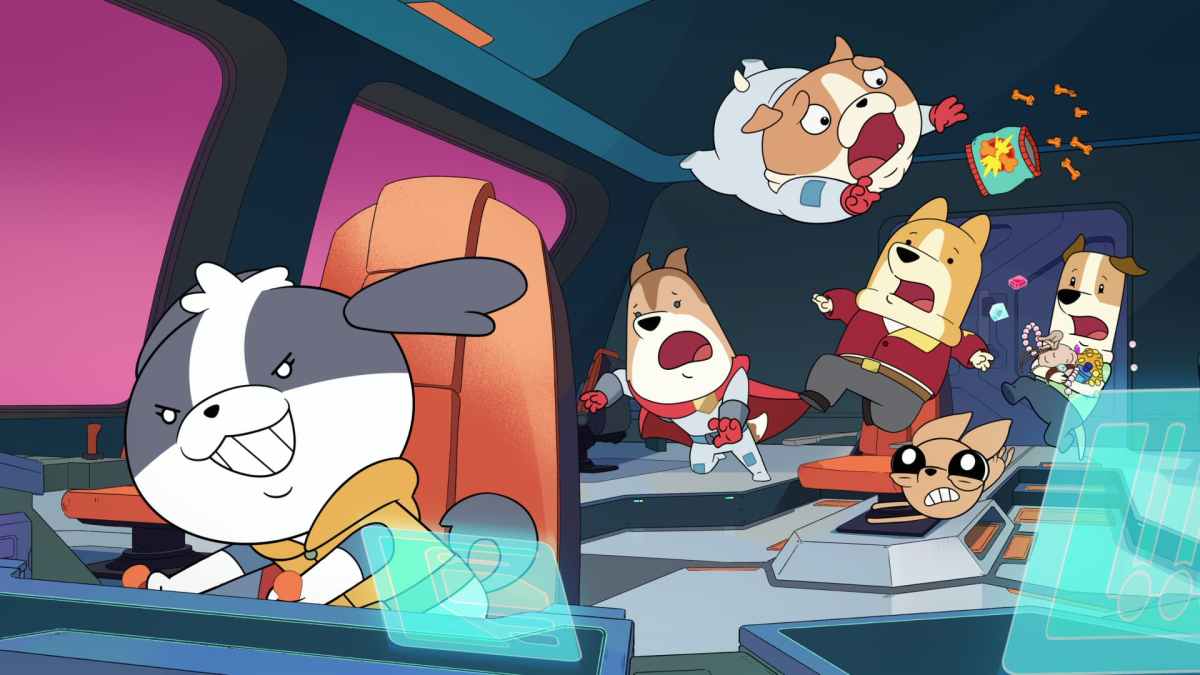 Dogs in Space is a Netflix Original animated series from Atomic Cartoons, a production house that has worked on a lot of projects aimed at very young kids. You might be forgiven for thinking its punchy title and ridiculously cute anthropomorphic canine characters are a bit juvenile, but it’s an adept sci-fi story that constantly poses introspective questions about loyalty, friendship, and the existential threat that is humankind. The show follows the over-enthusiastic Corgi, Captain Garbage, and his crew as they and a fleet of other genetically enhanced dogs search across space for a new planet for humans, ostensibly a galaxy-wide version of fetch.

Garbage’s incompetence as a leader is only outweighed by his dedication to the mission and his crew made up of equally quirky personalities. His crew and the other teams that live on the Embark, their massive capital ship, will delight as you learn more about them. Several compelling mysteries and situations are uncovered with genuinely shocking twists and reveals that make the show easy to binge. The intrigue is so good that you could forget it’s actually a fairly competent comedy as well, but I think it’s apparent the strength of the show is in its heart. There are quality voice performances from the entire cast, particularly Haley Joel Osment as the lead, as well as a few recognizable voices like Debra Wilson, Chris Parnell, and John DiMaggio to name a few. 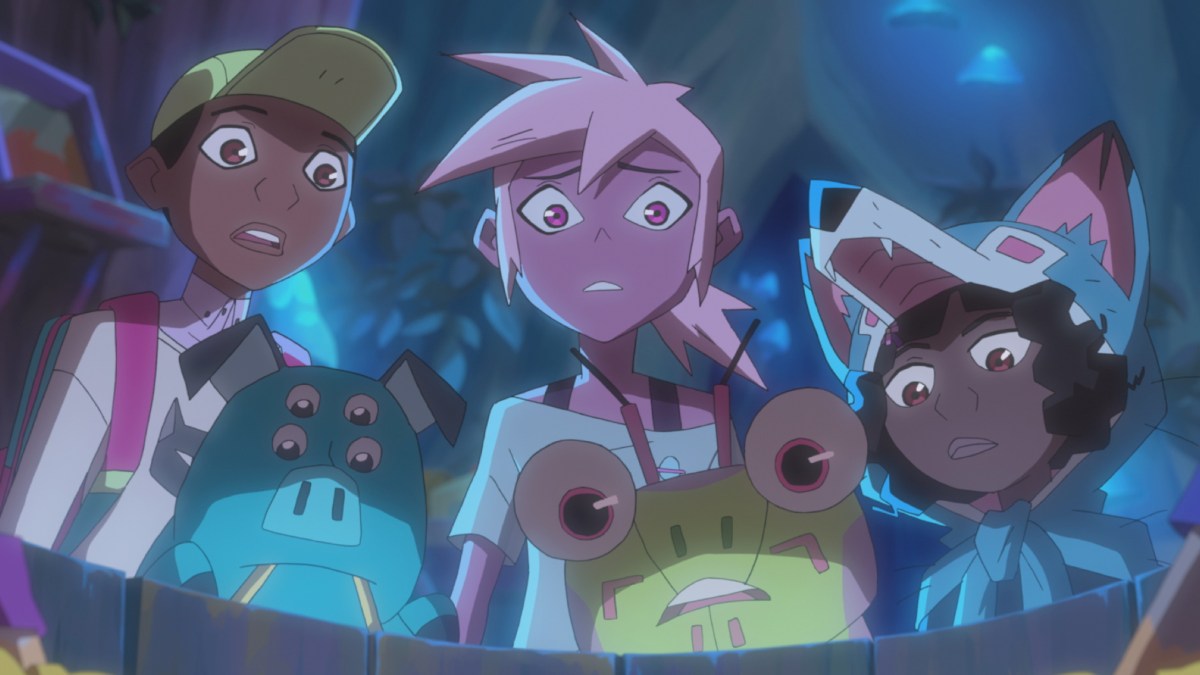 Kipo and the Age of Wonderbeasts

Kipo and the Age of Wonderbeasts is another Netflix Original animation that boasts a subtly unique style. Characters cut distinct silhouettes with their sharp angles, its color scheme is vibrant, but admittedly its aesthetic might be the easiest on this list to forget. Its characters, however, are a mix of intriguing misfits thrust together by tragedy.

Kipo is a burrow dweller, a human that had lived her entire life underground due to the surface being ruled by eclectic factions of super-intelligent animals. But after her home is destroyed and she’s separated from her people, Kipo meets Wolf, a young girl and gruff survivalist; Benson, a carefree surface scavenger; Dave, an immortal Silk bug; and a blue, four-eyed pig she names Mandu. The main cast is instantly likable and episodes tend to include a surprising amount of high-quality action set pieces.

However, despite the group’s ability to fight, Kipo consistently solves her problems with genuine compassion and a willingness to understand her enemy, no matter how seemingly ill-advised — an idea we could use a lot more examples of in media. An added bonus is that the main cast is largely composed of people of color, starring Karen Fukuhara of The Boys as Kipo, Coy Stewart of Agents of S.H.I.E.L.D. as Benson, Deon Cole of Blackish as Dave, and stellar young newcomer Sydney Mikayla as Wolf. 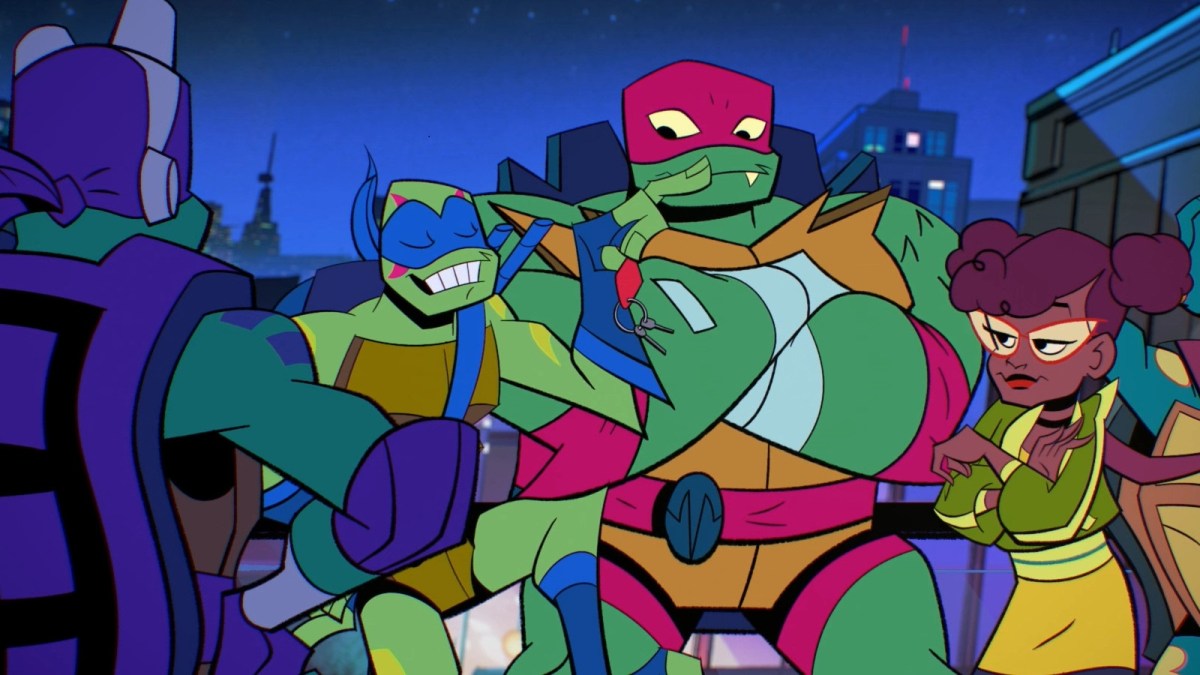 Finally, the last non-anime cartoon I’d like to recommend that happens to (mostly) be on Netflix is Rise of the Teenage Mutant Ninja Turtles, a Nickelodeon-produced animated series that takes a fresh look at the world-famous band of comic book heroes. While live-action and animated TMNT movies and TV series seem to cycle regularly, I make no exaggeration when I say that Rise of the Teenage Mutant Ninja Turtles is by far the best series starring these characters that I’ve ever seen. This series regularly matches the scale and spectacle of the highest-quality anime studios with their movie budgets, with not-so-subtle references to Studio Trigger, one of the best in the business.

There’s a particular expertise at work when characters or objects are in fast motion showcasing incredible tracking shots with tons of frantic action taking place in the back and foreground simultaneously. Frankly, the show was the catalyst for this entire list, as I was desperately searching for more animated content to fill the void left by this remarkable series. Rise is an origin story as well as a reinterpretation of a lot of the well-known lore and ideas that make up the turtles property. It’s not afraid to mix things up by adding mystical powers to each turtle and giving them slightly different weapons as well.

The biggest change positions Raphael as the oldest brother and leader of the group, but the core of what makes the team gel is their push-and-pull nature with one another. Despite all four brothers being several degrees wackier as slightly younger incarnations, they bump heads in the same ways you’d be familiar with, as Leonardo and Raphael especially grate on each other since Leo tends not to respect Raph’s authority. The internal tensions fuel a lot of the drama of episodes as a fun new rogues’ gallery of villains and allies force the team to work out their issues in order to keep their family alive.

Their true strength is exemplified by their teamwork, which you get to watch be trained and tested over the two seasons available on Netflix. I should mention here that strangely the third and final season of Rise of the TMNT is only available on Amazon Video rather than Netflix, but it is worth the purchase to finish the show. The full-length movie available on Netflix also takes place after the show ends, so I’d suggest watching it in order.

Rise of the TMNT reminded me that there are cartoon series that rival and surpass a lot of what the most popular anime houses are releasing. That isn’t to say those studios aren’t knocking it out of the park as well (especially in 2022), but the world of animation is much bigger than it seems. Some of the incredible work in cartoons being produced outside of the anime space is worthy of some recognition too.