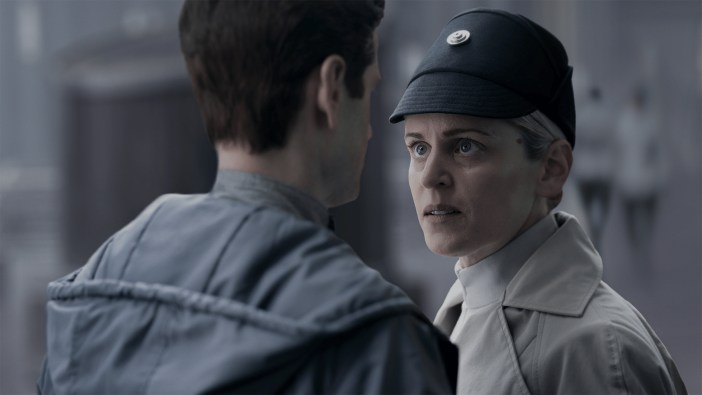 “I don’t like wasting time,” Supervisor Dedra Meero (Denise Gough) warns Bix Caleen (Adria Arjona) at the start of “Nobody’s Listening!” It’s a statement layered with irony, as everybody on Andor is doing some sort of time.

Of course, the prisoners on Narkina 5 have the luxury of a counter in their cell to run down their “tab.” Although, the tab is never settled. In “Narkina 5,”  Melshi (Duncan Pow) warned Cassian (Diego Luna), “Don’t ever look at the number. You’re in until they don’t want you anymore. Get straight with that.” He elaborates on the point in “Nobody’s Listening!,” explaining, “They could keep us here forever if they wanted.”

After all, the Empire used the Aldhani raid in “The Eye” as justification to double the prison sentences of everybody at the facility. Even then, characters like Kino (Andy Serkis) and Ulaf (Christopher Fairbank) cling to the hope that they might eventually be released. Ulaf is both an “old-timer” and a “short-timer,” and the prison shift around him covers for his failing physical and mental health, in the hope that they can get him across the finish line if they work hard enough.

Of course, that is all a lie. In the episode’s final scene, Ulaf has a stroke with 40 shifts left on the clock. More than that, Dr. Rhasiv (Adrian Rawlins) reveals to Kino and Cassian that the whole idea of release is an illusion. The Empire just shifts inmates around to create the illusion of time served. “No one’s getting out, are they?” Cassian asks. “Not now,” Rhasiv explains. “Not after this.” Why would the Empire ever release those caught in its grasp? Why would it ever loosen its grip?

This idea ripples through the various plot threads of “Nobody’s Listening!” In the episode’s opening scene, Meero dangles the prospect of release in front of Bix in the hope of earning her cooperation. Bix is at least smart enough to see that Meero is just lying. “You’re not going to believe me anyway, are you?” Bix asks. Meero has the slightest decency to be honest in her response, “No. I suppose not.” Even after the torture, Meero insists that Bix be held indefinitely by the Imperial garrison on Ferrix. 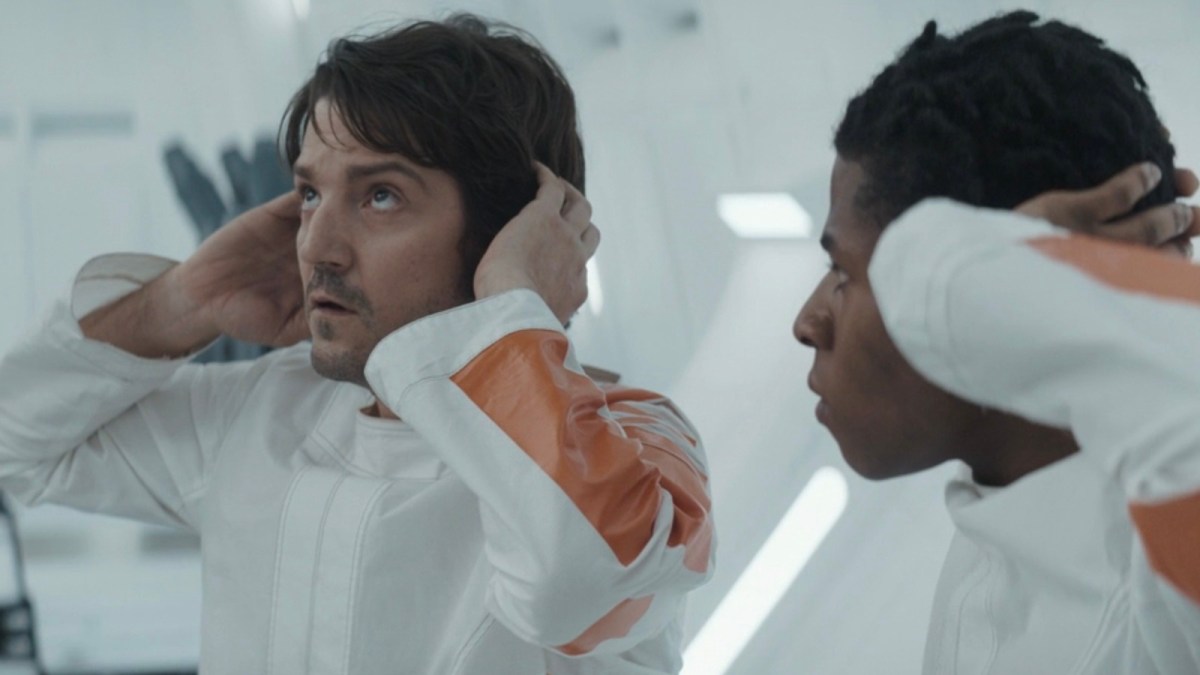 Time is a subjective thing. Dr. Gorst (Joshua James) concedes as much while explaining the particulars of the “unique interview system” that he uses to ensure cooperation from his subjects. “Doesn’t take long,” he boasts to Bix. “It won’t feel that way to you, inside.” The Empire has the luxury of time, setting it and controlling it, in a way that its subjects do not. “Time is not unlimited,” Tay Kolma (Ben Miles) warns Mon Mothma (Genevieve O’Reilly), but that’s only true for people.

The Empire is a vast and inhuman entity. It is a monstrous bureaucracy with no humanity. It has a different understanding of time than those caught in its web. All it has to do is outlast those who would rise against it, let them succumb whether physically or mentally to the ravages of age, and let them make the sorts of mistakes that are inevitable across a long enough timeline. After all, if an organization has enough time to do enough random checks, it will eventually catch a rebel pilot.

This is most obvious with Mon Mothma, who lives an ostensibly lavish and privileged life. She is a high-profile senator, who lives in pristine quarters and hosts fancy dinner parties. One of the great accomplishments of Andor is how Mothma’s apartment is both spacious and claustrophobic. The set is large, but directors Susanna White and Toby Haynes repeatedly box Mothma within the frame, shooting her within neon-bordered doorways or between vertical shutters. 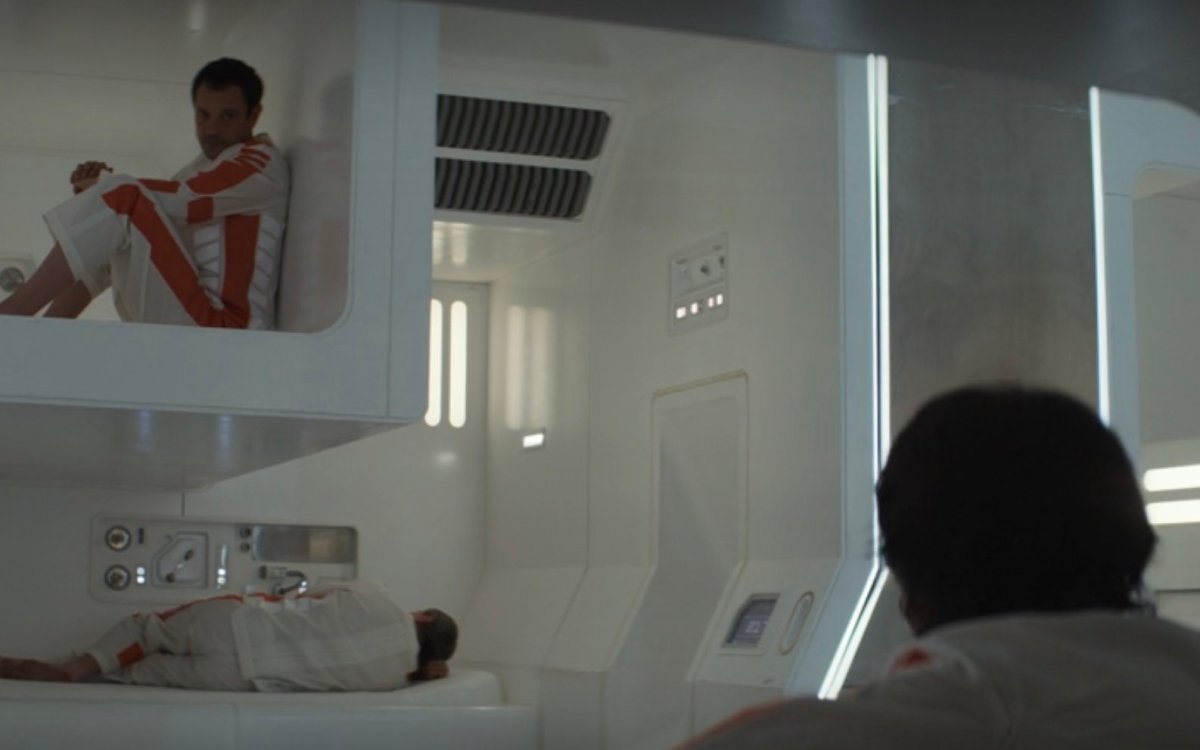 True to the narrative conventions of Star Wars, “Nobody’s Listening!” reveals an unexpected familial connection within the core cast. Vel Sartha (Faye Marsay) is Mothma’s cousin. Sartha feels no small amount of pity for the lie in which Mothma finds herself contained. When Mothma expresses concern about Sartha’s more overtly dangerous rebel activity, Sartha responds, “You’re one to worry about. Trapped here, boxed in.”

Of course, Sartha is herself trapped, particularly when returning to Coruscant. Like Luthen Rael (Stellan Skarsgård) putting on his costume returning to Coruscant in “Aldhani,” Sartha has to perform a role to conceal her true self. As she leaves, Mothma gives her cousin some sage advice, “Be a spoiled rich girl for a while. Remind people that’s who you are.” However, part of the beauty of Andor is the way in which the show understands that this creates its own prison around Sartha.

Sartha is a queer woman. She is in a relationship with Cinta Kaz (Varada Sethu). It is a compelling and emotionally engaging relationship, one that feels genuinely loving and affectionate. It stands quite apart from the sorts of “exclusively gay moments” that major studios put in these sorts of major releases, which are often brief expressions of chaste intimacy that can be easily overlooked or trimmed like those in Beauty and the Beast, Onward, or The Rise of Skywalker.

In contrast, Andor explores Sartha’s sexuality as a part of herself that she has to compartmentalize to pass within the fascist state. “Find yourself a husband?” asks Perrin Fertha (Alastair Mackenzie), Mothma’s husband. “Well, you need a widower at this point. Who’s left of any value at your age?” It never occurs to Fertha that Sartha could be anything other than a straight woman, and Sartha does not have the luxury of acknowledging her sexual identity to him. It is its own sort of prison. 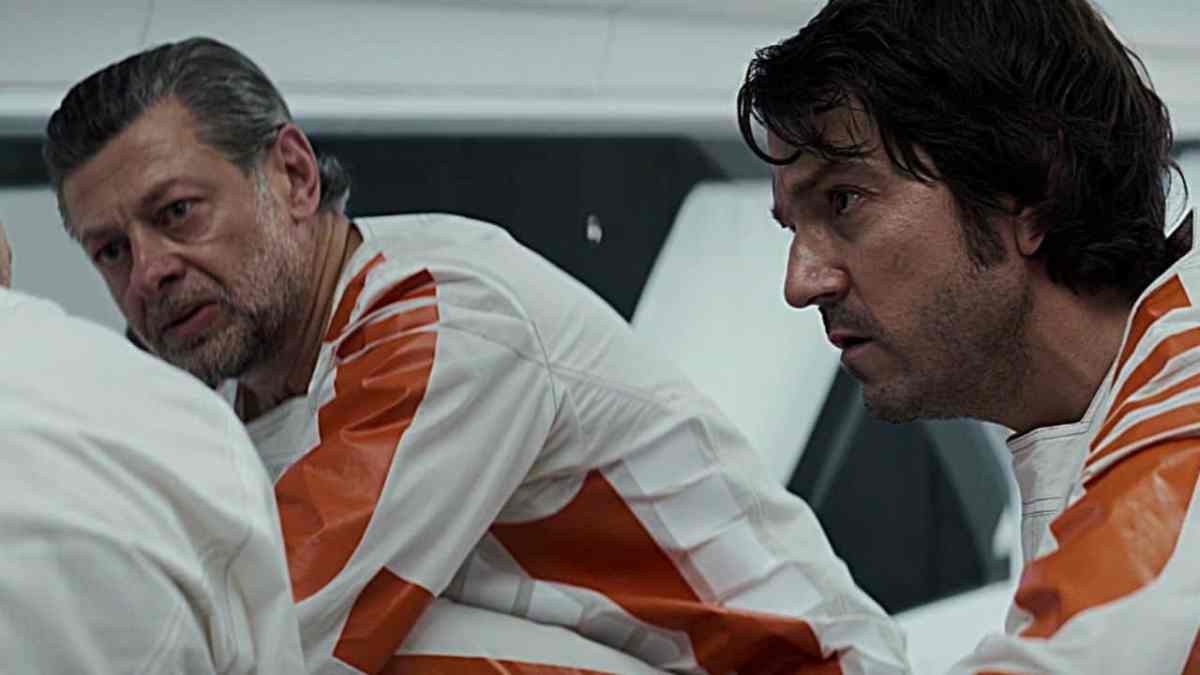 Of course, people react to imprisonment in their own way. People like Cassian, Mothma, and Sartha respond by pushing back against it — by appearing to comply while also trying to find weaknesses in the system that they can exploit. Others buy into it completely, in much the same way that Kino invests in the idea that Ulaf is just a few cycles away from going home and refuses to accept the reality that the Empire would just murder a hundred people to keep the system ticking.

This system of oppression isn’t just maintained by the state. After all, Fertha isn’t erasing Sartha’s identity in his capacity as an official, but as a member of her extended family. These systems self-perpetuate. This is most obvious in the troubled relationship that Syril Karn (Kyle Soller) has with his mother Eedy (Kathryn Hunter), which in many ways plays as a microcosm of the oppressive relationship that the Empire has towards its subjects.

As with Mothma’s apartment, White and Haynes have done an excellent job making the Karn family apartment feel like its own sort of prison. The breakfast cubby looks a lot like the prison cell to which Kino and Cassian return each night after labor. Camera angles often suggest that Syril is boxed in and trapped, glimpsed within windows and framed by outlines. Syril is serving his own sort of prison sentence, one that also doesn’t have a clear release window.

Eedy is arguably more of a prison warden than a mother. “You’ve been searching my room again,” he complains, suggesting the sort of “overreach” that Mothma protested against. Eedy responds, “It’s called cleaning. I like a tidy house.” It is a gross violation of privacy and an intrusion into both Syril’s physical and psychological personal space. “You’ve been in my private box,” Syril complains. “I have ways of knowing.” The Empire does like to keep people in boxes, literal and metaphorical. Eedy’s justifications are similar to that of any other oppressive regime. “What is the return on my investment?” she demands, reflecting the Empire’s capitalist outlook. Eedy is also thrilled at how the embarrassing disaster on Ferrix in “Reckoning” only gave her more power over Syril. “Look back just months ago, when you could easily ignore me,” she insists. “Imagine. Imagine, I cracked under the weight of your neglect. Imagine I’d cracked and wasn’t here now to pick up the pieces.”

Syril clearly resents his mother, but he is also drawn to her. “Nobody’s Listening!” reveals that he has fixated on Meero as an object of his affection. He insists that his brief encounter with Meero restored his faith in “justice and beauty in the galaxy” and reassured him that “life was worth living.” Given how oppressive Eedy is, and the way that she’s positioned as an analogue for the Empire, Syril’s fixation on Meero is borderline Oedipal and almost as creepy as anything on House of the Dragon.

Again, Andor argues that the only way out is through collaboration and that the Empire wins by scrambling people’s abilities to coordinate to escape their prisons. The Empire tries to stifle communication across Narkina 5 to suppress reports of the massacre on Level Two. “It takes a week for one word to get all the way up here,” Loy demands as rumors spread. “How many hands does it take for one word to get through up here?” After all, the Empire seems to be able to deal with enemies like Kreegyr or Maya Pei individually.

Of course, there are two great ironies here. The first is that the Empire itself suffers from this lack of internal communication. In “Nobody’s Listening!,” Meero is leading a manhunt for Cassian Andor, a man who is already in Imperial custody. The second is that, however slowly, its enemies are figuring out how to communicate and share not just information, but ideas. On Coruscant, Sartha repeats the mantra that Kaz gave to her, “The Empire doesn’t rest, Mon. The Rebellion comes first. We take what’s left.” She derives strength from it.

Ultimately, “Nobody’s Listening!” suggests that the Empire likes to keep its subjects in one box until it is time to put them in another. When Ulaf asks what happened to the murdered inmates on Level Two, Melshi sarcastically replies, “They set them all free.” After euthanizing Ulaf, Rhasiv reassures Kino and Cassian, “At least your friend is free.” This is the only way the Empire will ever release its subjects. One can only hope that this is not the only way out.