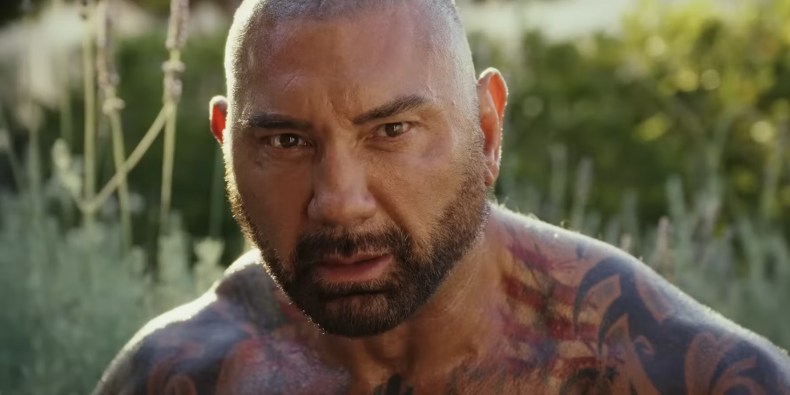 When it comes to wrestlers becoming actors, there is quite the spectrum of quality. For example, Hulk Hogan (and, in a cameo, the Undertaker) may have made the comedy masterpiece that is Suburban Commando, but he is not remembered for his film roles. Against all odds though, Dave Bautista is becoming better known as an actor than he ever was as a wrestler, with notable roles in Guardians of the Galaxy, Blade Runner 2049, Glass Onion, Dune and its upcoming sequel, and soon M. Night Shyamalan’s Knock at the Cabin. GQ has done a feature on the actor to see what makes him tick, and he comes across as a pretty low-key guy just looking to push himself professionally. Dave Bautista also had some comments about his passion as an actor and not retreading the same ground as Dwayne “The Rock” Johnson.

“I never wanted to be the next Rock,” he said. “I just want to be a good f*cking actor. A respected actor.” It doesn’t sound like Bautista intended that in an incendiary way, though it could certainly be taken that way indirectly — the Rock has had a long career of big-budget blockbusters that haven’t garnered critical accolades. Our esteemed critic Darren Mooney noted that it is difficult to point to any Dwayne Johnson-led movie that is genuinely great.

Regardless, the GQ feature paints a compelling picture of Bautista as someone who has repeatedly hit rock bottom and forced himself to find something better, whether it is professional wrestling or acting. It’s a good read, and it’s also a good reminder that Knock at the Cabin is coming on February 3. In the interim, let us know what you think of the acting skills of Dave Bautista, Dwayne “The Rock” Johnson, or, preferably, Rowdy Roddy Piper.