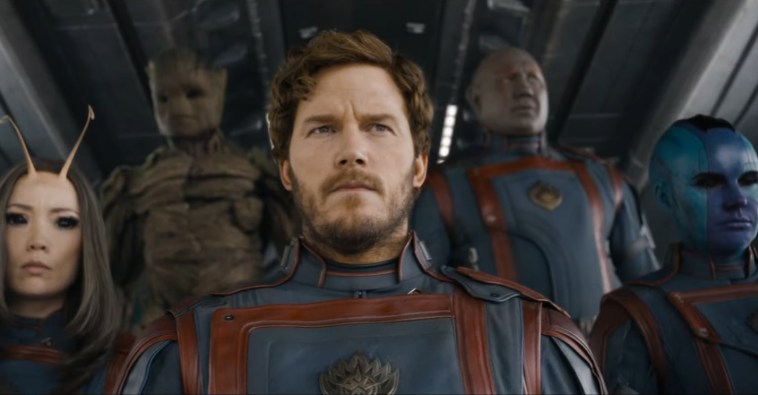 As part of Brazil Comic Con (CCXP), Marvel Studios revealed the official trailer for Guardians of the Galaxy Vol 3, the final MCU movie to be directed by James Gunn for the foreseeable future. The Guardians of the Galaxy Vol 3 trailer is packed with gags right from the get-go, when Drax totally beams some alien kid who belongs to a civilization they’re supposed to be helping. It’s a funny trailer in general. Yet at the same time, with some of the dramatic shots and the choice of music (“In the Meantime” by Spacehog), the trailer is also somber.

“We have been running our whole lives,” says Peter Quill (Chris Pratt, the universally beloved voice of Super Mario). “Pete, I’m done running,” says Rocket Raccoon (Bradley Cooper) in apparent response. Likewise, there are a few different shots of injured people being carried around, and Groot (Vin Diesel) declares, “We are Groot!” as he and Quill are blasting lots of surrounding bad guys. Everything about the Guardians of the Galaxy Vol 3 trailer has a “one last ride” vibe to it, which is appropriate, because that’s exactly the sort of movie James Gunn is making, for both these characters and probably himself as an MCU director.

It’s not easy to make out what the plot of the movie will be yet, but the High Evolutionary (Chukwudi Iwuji) is the villain and Adam Warlock (Will Poulter) is in the movie as well. You can also expect a lot of unresolved feelings between Quill and the Gamora (Zoe Saldana) who still exists in this reality. Suffice to say, the plot will probably be a little meatier than what we saw in The Guardians of the Galaxy Holiday Special.