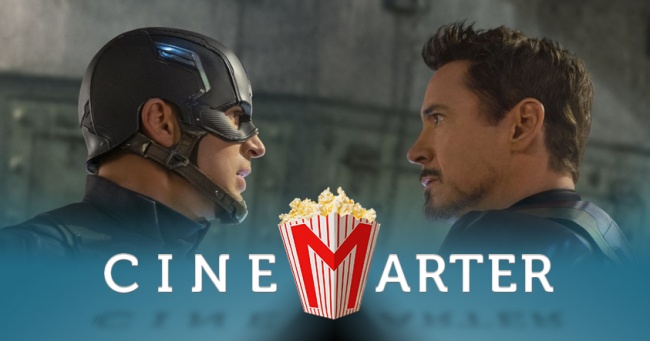 One of the best things that Captain America: Civil War has going for it is that it’s riding in on the coattails of Batman v Superman. Both films deal with similar subject matter, but the Marvel film succeeds in many of the areas that the DC movie failed. It looks better as a result, juxtaposing itself against something that was almost universally derided and coming in on a white horse while shouting “this is how it’s done.” Now, that doesn’t mean it’s perfect, but if I’m going to re-watch a 2.5-hour superhero movie whose central conflict revolves around whether or not the superheroes should be allowed to superhero without restriction, you can be darn sure it’s going to be Civil War.

We’ve got two major plotlines going in Captain America: Civil War. The first is the, well, “civil war” portion, which consists of the United Nations trying to put in place an accord which would put the Avengers at its disposal. On the government’s side is Tony Stark/Iron Man (Robert Downey, Jr.) who has opened his eyes to the collateral damage that the Avengers have caused over the course of several films. On the other side is Steve Rogers/Captain America (Chris Evans), who believes that signing the accord will put the team at the disposal of agenda-ridden agencies, and that just won’t do. 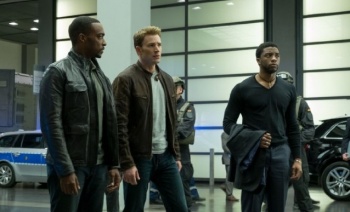 Our other plot sees the Winter Soldier (Sebastian Stan) blamed for a terrorist attack, even though he pleads innocence. One of the prime suspects, according to Captain America, is Helmut Zemo (Daniel Bruhl), who hates the Avengers because of reasons. Captain America wants to save the Winter Soldier – who is no longer evil (all the time) – and find the “real” perpetrator, while Iron Man wants to bring him to justice, because of the aforementioned terrorist attack. So, as you can see, the two men have even more reason to fight. They also split the Avengers in half, each taking several superheroes for his side.

Civil War is very successful in establishing precisely why everyone chooses a particular side. There’s no wishy-washy “just ’cause” going on here. We know where each character stands, both sides are given very valid points, and even potential double-crosses make sense. It’s thematically rich, as the Captain America movies are oft to be, and it might genuinely cause a divide among fans because of how level-headed it is. The first hour of the film doesn’t move at a breakneck pace because of how many characters and motivations it has to establish, but it’s never out-and-out dull. We get a few action scenes during this time, and the dialogue is never poor.

That action comes in a mixture of qualities. Some of it – the airport scene in particular – is spectacular. Other parts are choppy and a little hard to follow. None of it is bad, so don’t misquote me on that. It’s all varying shades of good, but the great parts are so spectacular that they make you wish it could all be at that level. Seriously, though, that airport scene is going to wind up being one of the best of the year, and it’ll be interesting to see if – and how – it gets topped in future movies.

Speaking of future movies, Civil War will make you want more – although maybe not necessarily for more team-up movies. At least, not right away. The Black Panther and Spider-Man solo films will likely jump up on your “must see” lists as soon as the credits – and post-credits – roll. Both characters have fantastic introductions, with Spider-Man, in particular, being a highlight. He brings many of the funniest lines and moments, and one can only hope that this new iteration will translate well into a feature-length project.

It’s not all sunshine and rainbows, though. Our villain is on the weaker end of the spectrum; his character isn’t all that strong and he feels just like Generic German #143. Crossbones (Frank Grillo) – who is in the movie – would’ve fit the role so much better. It does have a slow start, and some of the action scene editing isn’t the greatest. It also has too many characters – even with two of its heaviest hitters sitting this one out. But these are minor gripes about a movie that ultimately gets right everything it needs to.

Captain America: Civil War is one of the better Marvel superhero movies thus far. It has great thematic depth – thoroughly exploring a topic that Batman v Superman took 2.5 hours to barely pierce – a lot of fun characters, a couple of spectacular action scenes, and enough humor to break up the monotony of darker, more mature subject matter. The Captain America trilogy has come to its conclusion, and it’s a strong one.

Bottom Line: Nearly perfect in all the areas that matter, Captain America: Civil War is another great Marvel film and a wonderful conclusion to the Captain America trilogy.

Recommendation: You should probably see this one.