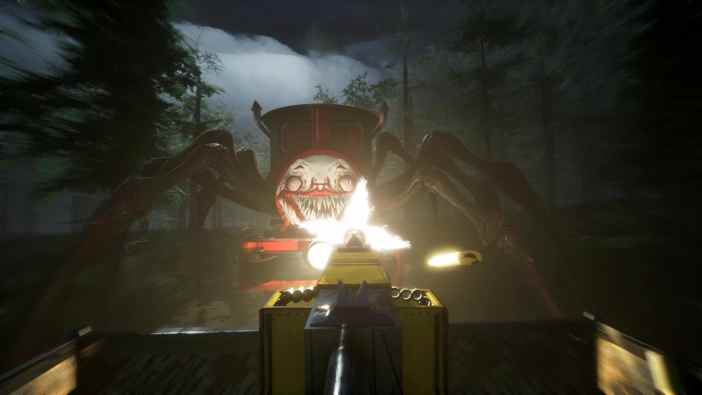 Turn on the lights and increase your brightness because Two Star Games has released an announcement trailer for Choo-Choo Charles, a PC survival horror game where a hungry spider train chases you through the woods. The trailer comes as a particularly scary start to October, with the player character seen cowering in fear as Charles moves in for the kill. He’s fast, too, but it looks like players are given their own train that will probably only prolong the inevitable. It’s pretty hard to describe exactly what Choo-Choo Charles is, so it’s probably best if you just see for yourself in the announcement trailer below.

Two Star describes its abomination of a video game as an open-world survival horror shooter where players are plopped onto a dark island. While one sentient train hunts you down, you’ll have the opportunity to upgrade and ride a seemingly less evil train around the island in hopes of ridding the world of Charles for good. That means your rideable train can be fitted with armor upgrades and even a mounted machine gun to help do the job, but Two Star says Choo-Choo Charles has bobblehead collectibles to find too.

If you’d like to subject yourself to Charles’ torment, you’ll have to wait a little, as Choo-Choo Charles isn’t set to come out until sometime in Q1 of 2022. When it does eventually launch, it will be available to purchase on PC via Steam. If you’re into the idea of other terrible creatures chasing you through foggy wooded areas, make sure you check out The Lost Wild, a game where you have to run from, hide from, and outsmart vicious dinosaurs.