The videogame industry has never been far from controversy. Exidy’s Death Race 2000, released in 1976, attracted so much negative attention from lawmakers and reporters, that the company sold ten times as many games as it had originally expected. Just last week, the digital publisher Good Old Games disappointed many customers when it announced it was shutting down the service. A few days later, GOG.com revealed the shutdown was just a publicity stunt to gain visibility for the launch of a new publishing portal. While the move angered many customers, the controversy brought GOG.com to the attention of many gamers who had never heard of it.

Ever since we figured out that being bad can sometimes sell, marketers have been courting and creating controversies to capture the attention of a media and a public that’s all too willing to run in headfirst, torches and pitchforks held high, to purge the monsters from our midst. The tactic isn’t new or revolutionary; it’s been a part of art and entertainment ever since we discovered we could get attention by pissing off the right people.

Games that Take It
There is no shortage of examples of games that have attracted unplanned controversy. For example, controversy found Bioware’s Mass Effect. Reacting to some trailers and fabricating some sort of fantasy of interactively controlled sex, Fox News’ Martha MacCallum reported that it had digital nudity and sex. Another Fox News report described it as “Luke Skywalker meets “Debbie Does Dallas.” Bioware and its new owner, EA, reacted perfectly. They coordinated with gaming journalists to debunk the myth and put pressure on Fox News to get the story straight. The affect of this negative attention galvanized gamers to defend the game. Overall, the game was exposed to more people than Bioware/ EA’s budget could have afforded and Bioware came out the victor of a classic David vs. Goliath battle. If Bioware or EA had reacted to the situation by highlighting the sexuality in the game through ads, it would have only fed into the narrative critics were trying to fabricate

Games that Make It
During PAX Prime, the reveal of Duke Nukem: Forever came with some unorthodox and somewhat controversial gifts. Some of the swag was labeled “Steroids.” Was this controversial? Kind of. It was a smart move for Gearbox to release it at PAX, where tongue in cheek humor can be taken at face value and in good fun. Most fans who understood the Duke Nukem mythos weren’t offended and the gamers who really got offended were never the intended audience. These kind of tactics work, and they work well. They grab attention and galvanize the “Can’t you take a joke?” crowd. While this marketing may be in bad taste and juvenile, it’s appropriate for the game. If the marketing has to convey the experience of the game, it has to communicate to the gamer an honest expectation. So, while the steroid-swag was over the top and puerile, it kind of kicked ass because it’s marketing Duke Nukem true to form.

Games that Fake It
During E3 2009, EA marketed Dante’s Inferno by hiring a group of fake Evangelical Christian protestors, waving signs proclaiming “ditch your PlayStation for a PrayStation” and “EA: Electronic Antichrist”. While this immediately caught the attention of some of the news media, for the most part, the gaming media was pretty savvy. Most of them smelled something a little off… a little bit of Poe’s Law, which states, “it is impossible to create a parody of Fundamentalism that SOMEONE won’t mistake for the real thing.” Their skepticism was well founded. Not long after some larger media outlets picked up the story, we learned the protestors were hired to promote the game. This prompted many Christians to feel mocked by EA. Predictably, many gamers flooded forums with promises to avoid the game. 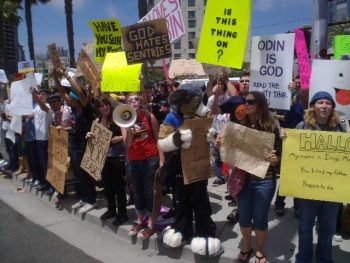 Using Behavioral Research to Elicit a Desired Response
Controversy marketing in general manipulates our primitive instincts for inclusion. The controversy is triggered by challenging a commonly held belief, taboo or ritual within the group the marketing team is targeting. For example, if a company is making a mixed martial arts game, it will have an audience analysis that reveals different types of purchasing and activity behaviors associated with the MMA audience. Other groups are analyzed and identified as either neutral or hostile to MMA. To get a successful controversy marketing campaign, the marketer will study the hostile groups and find a “pain point.” During development, these audience analytics are sometimes incorporated in the development process, and what was once a straightforward MMA game might have a mini-game about protesters.

The game’s creators can claim their intention was not to ridicule these opponents, but to give gamers a more realistic and fully realized MMA experience. In almost every entertainment industry, there’s a lot of research not only to find out what purchasers want, but what the anti-groups’ pain points are. If the development and marketing teams work together on this, hitting the right pain point of the right audience can spur them into a real campaign that gets attention. Done right, the anti-group can start calling for bans, legislation and even lawsuits. Again, for many industries, including the gaming industry, it’s done because it works. Is it manipulative? Yes. Is it unethical? Sometimes. Is it illegal? Not at all.

The data doesn’t lie: more units are sold when there’s a controversy or scandal associated with the game. When threatened, the supporters are given a cause to defend and they do so with fervor, increasing their intent to purchase. The tertiary benefit is that the targeted audience considers this purchase a statement. Those kinds of feelings inspired are one of the holy grails of marketing; we’ve not only influenced your behavior, but the way you feel.

Fan the Flames or Let them Simmer?
Once the controversy starts, it becomes its own animal. This thing marketing created grows to the point where people want to use this controversy beyond the game itself, either to make changes to the industry or society, or to further their own career. If the controversy campaign works, the marketer has to monitor the situation and the company’s reputation closely. If the anti-group makes significant headway, then it’s time to start crafting a response or to change product itself. While “I’m sorry you were offended” is pretty much PR standard operating procedure, this will not stifle the protesters; there’s a good chance it will make them even more upset. However, because there’s been an apology, the controversy will generally die down and the anti-group will be left with a simmering distrust of the organization. A well timed announcement will keep the target audience interested in the product, keeping their motivation high while simultaneously looking like the company is doing something to repair the hurt generated by the controversy.

It All Affects the Bottom Line
Every effort in marketing can be boiled down to the “ROI” or “Return on Investment”. It’s basically a single number that reflects the success of the marketing campaign compared to the money and effort poured into it. If the return on investment is positive, then that campaign has succeeded. If the return is negative, then the campaign is either modified or removed. Controversies as an event or controversies as a strategy rarely fail by providing a negative return on investment in the videogame industry. The marketing of games like Dante’s Inferno and Evony have been roundly ridiculed, mocked and despised. Dante’s Inferno reached platinum status, selling over a million units and Evony continues its borderline soft-core porn marketing. If they didn’t work, they wouldn’t continue.

As creators and consumers of videogames, we need to ask ourselves if these tactics, even when successful, are merely illusory short term gains. They reinforce the negative gamer stereotypes to those outside our world and they make the industry look juvenile. These controversies are being used by those who’d want to limit our freedom of speech and expression by providing our opponents with no shortage of scandalous media to attack us with. The issue is not whether or not to make a profit, but whether these manufactured scandals create a scenario where profits are short-lived, unsustainable and have a negative long term effect on the industry and the people who make and play games. It’s the age old conundrum of capitalism. Would you tear down a forest to make a hell of a lot of money tomorrow, or would you use that forest to sustain generations?