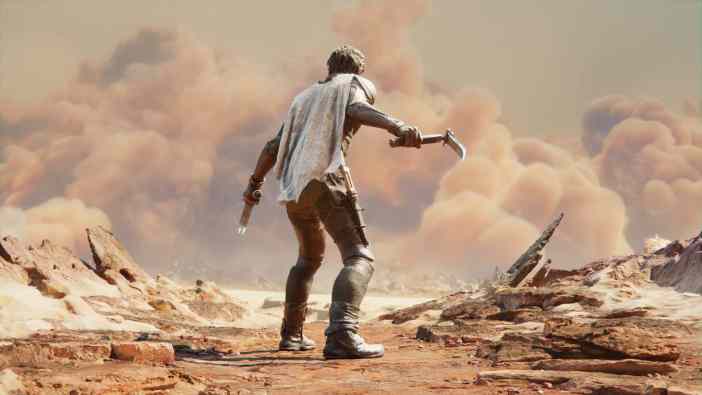 If Dune didn’t worm its way into your life with Denis Villeneuve’s film adaptation last year, then this new game called Dune: Awakening, an open-world survival MMO for PC, PlayStation 5, and Xbox Series X | S, might do the trick. A trailer for this new take on the Dune universe was revealed during Gamescom Opening Night Live 2022, showing the breathtaking sights of Arrakis before our protagonist jumps straight into a monstrous sandworm. No release date has been revealed yet, but you can take a look at Dune: Awakening in the trailer below.

Developer and publisher Funcom shared more information about Dune: Awakening and its open-world survival MMO elements on the game’s Steam page. The experience promises to combine “the grit and creativity of survival games with the social interactivity of large, persistent multiplayer games to create a unique and ambitious Open World Survival MMO.” That means players will build shelters to defend against the harsh environments of Arrakis while keeping in mind the status of their suit. You’ll, of course, collect spice as you create factions and make a name for yourself.

Dune: Awakening will come to PC and consoles… eventually.

For more Gamescom reveals, check out dark fantasy sequel The Lords of the Fallen, the release date of Sonic Frontiers, digital miniatures game Moonbreaker from the Subnautica developer, and the reveal trailer for New Tales from the Borderlands.