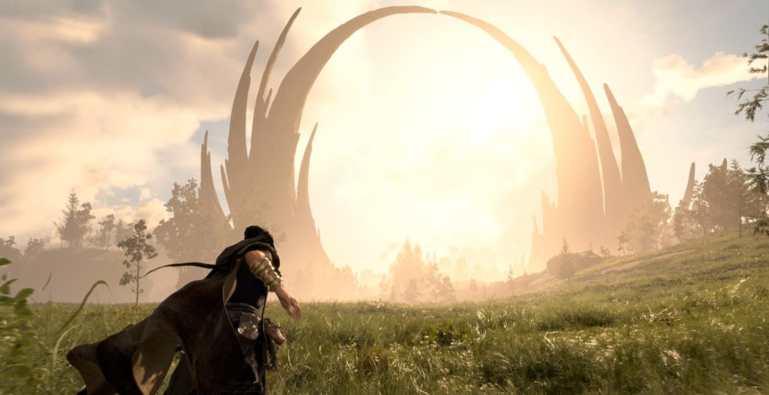 Square Enix and Luminous Productions’ action fantasy epic, Forspoken, received a story introduction trailer and spring 2022 PlayStation 5 (PS5) release window during today’s PlayStation Showcase. The video primarily gives us a better look at Frey, the game’s excitable protagonist, and how she manages to get lost in a dangerous fantasy world.

Other threats and characters are introduced, too, with the trailer starting in New York City and eventually making its way to fire-breathing dragons and the other mysterious powers that lie in the land of Athia. Some of Forspoken’s key characters highlighted in the trailer include the magical wrist companion, Cuff, as well as Tanta Sila, a matriarch of Athia that will stand in Frey’s way. The trailer also introduces Johedy and Auden, who will aid players on their trek through the world. Square Enix has tapped a few notable actors to play these roles, with Jonathan Cake (Stargirl) playing Cuff, Janina Gavankar (True Blood) playing Tanta Sila, Keala Settle (The Greatest Showman) playing Johedy, and Monica Barbaro (Top Gun: Maverick) playing Auden. They are joined by Ella Balinska, who appeared in the 2019 Charlie’s Angels reboot.

Other highlights from the Forspoken trailer are the combat and movement systems, which look to offer even more fluidity than in the Luminous team’s previous title, Final Fantasy XV. Magical flourishes dance through nearly every attack and leap, with Frey able to cast spells of all sorts. Meanwhile, God of War composer Bear McCreary offered his talents to create the score alongside BioShock composer Garry Schyman. See some of what Forspoken has to offer in the trailer below.

Forspoken’s lore and world have been developed in collaboration with Rogue One: A Star Wars Story writer Gary Whitta and former Uncharted lead Amy Hennig. Read the story synopsis from Square Enix and Luminous below:

Mysteriously transported from New York City, Frey Holland finds herself trapped in the beautiful and cruel land of Athia with a magical, sentient bracelet wrapped around her arm. Her new, cynical companion “Cuff” helps Frey navigate through the sprawling landscapes of Athia. In search of a way home, Frey will battle monstrous creatures, confront the powerful Tantas, and uncover secrets that awaken something much more from within.

When the game eventually launches, it will be exclusive to PS5 for the two years following its launch. Stay tuned for more updates on Forspoken when it comes to PS5 in spring 2022.