I’m having a good time with The Secret World. The augmented reality quests are a nice touch and the real-world setting gives the game a Hellboy or Sandman vibe, but it still didn’t take very long for me to think of The Secret World as “just another MMO,” as uncharitable as that may sound. I’m really hard on MMOs because I still remember what it felt like to play EverQuest for the first time in 1999.

I had been that kid who read the Dungeons and Dragons sourcebooks but never had a group to play with, so EverQuest was a dream come true for me. I’d always wanted to play a ranger in a role playing game, and there I was. The land of Norrath was a whole new world to explore, and an entirely different way to play videogames. It was a revelation. It was magical. And when I saw there was a Star Wars MMO also, I had no choice but to sign up.

I’ve been jumping in and out of MMOs ever since looking for the sense of wonder I felt when I first stepped foot into EQ. World of Warcraft held me for a little while because Blizzard’s attention to detail and art aesthetics are brilliant, so WoW actually did feel like a new world. Then I hit the level grind and tuned out. No MMO has held my long term attention since, and sometimes I wonder if I’m doing it wrong.

MMOs are designed for long-term play. To get the most out of them you have to get stuck in and learn their intricacies and explore all their different areas and dungeons. For the hardcore MMO fan, the genre’s recurring language of play is probably enough to rope them in and hold them. I feel the same way about first person shooters. I love the genre so much and am so fluent in its language that complaints about the inherent sameness of FPS games roll right off my shoulders. While I want to see the genre evolve, particularly in the arenas of persistence and consequence like what’s being attempted by Heroes and Generals and Planetside 2, I’m happy just playing a generic FPS because I can pick it right up and be good at it.

I loved EQ and Galaxies just as much as I love my FPS games, but I have no similar tolerance for sameness in MMOs. World of Warcraft crystallized the language of the MMO and developers have been iterating on those mechanics ever since. Character classes have become more fluid and hybridized, and some active combat has supplemented the standard click target and press number-keys setup, but by my reckoning the basic, core design of the MMO has not changed very much at all since EverQuest. Whenever I jump into a new MMO it usually takes a month or so for the veneer to wear off and then I get bored and jump out.

I have tolerance for sameness in first person shooters because as much as I love them, I don’t think the genre has a terribly high ceiling for creativity; and before you bring up Portal or the upcoming Antichamber those aren’t first person shooters. They’re first person puzzle games. Games like Half-Life 2 and BioShock pushed the FPS boundaries mechanically and narratively but the core of both games was the same. You see things from a first person perspective and run around shooting. There may be some puzzles to solve and a story to watch but those can be removed from the equation and the game still works. A first person shooter doesn’t work if you get rid of the shooting. It either becomes a different kind of game altogether or is just a shitty game. 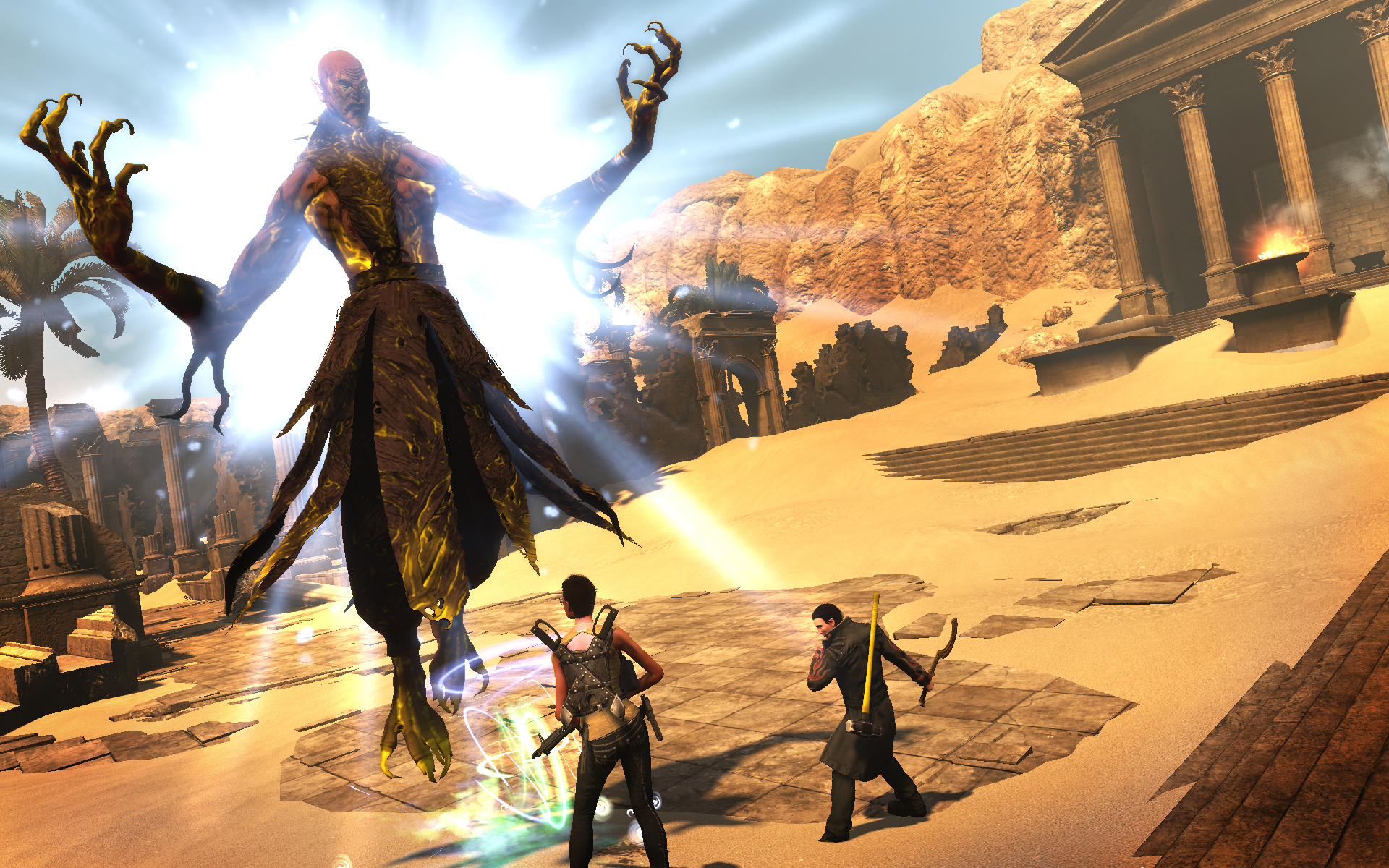 FPS games are like the kid who tries really hard at school but just isn’t very smart. When that kid gets a 75 on a test the teacher may encourage him to do better but they’re not going to ride the kid’s ass because that would just be needlessly discouraging. The kid’s trying as hard as he can.
If the same teacher is facing a student who is exceptionally bright and gets a 75 on the same test, the teacher may ride her to do better because the teacher knows she can do better. Massively multiplayer games are the bright kid. They can be so much more than they are, because the heart of the massively multiplayer game isn’t mechanics. It’s people. You can completely abandon all the existing mechanics of a typical MMO, levels and experience points and click-and-number-key combat and quests and loot and as long as you still have thousands of people co-occupying a virtual space together while controlling some sort of avatar which projects them into that virtual space together, it’s still a massively multiplayer game.

When I think about the potential of a massively multiplayer space I think about Second Life. It’s not a videogame, but it does show you what can happen when you take greater advantage of the basic building block of a massively multiplayer space. Second Life feeds into human beings’ creative potential. It gives users the tools they need to shape a world, and those users produce strange and wonderful things.

When I think about the potential of a massively multiplayer game I think about EVE Online. I find the game personally unappealing to play as it’s like a second job, but as an environment to watch, EVE is one of the most dynamic and consistently-interesting MMO spaces we’ve ever had because the players build the world. I wonder what Minecraft would be like if it was a unified server with a million players sharing massive continents and collaborating on huge cities together.

Sometimes I float that idea past people and they worry about the douchebaggery that might ensue. The typical MMO is pretty safe in that way. The game sets relatively strict boundaries within which the players can operate. EVE Online is different because CCP doesn’t get in the players’ way, even when a corporation like Goonfleet pulls their usual antics which are endlessly amusing from the outside. I can’t dismiss this concern, and I understand why some people would want risk-free, massively-multiplayer spaces. But that doesn’t mean we can’t also have another sub-genre diverging off from the beaten MMO path for anyone who wants something different.

When I think about the potential for the MMO, I think about Ernest Cline’s book Ready Player One which posits the OASIS, a blending between Second Life and every MMO every made. Kids go to public school in the OASIS. Corporations build entire planets like amusement parks. It’s a truly virtual world that people inhabit. It’s also a little over the top and way outside our current technological reach, but it’s not an insane notion. MMOs have the potential to create the kind of videogame spaces that no other genre can. That magical feeling I had upon stepping foot into EverQuest for the first time might be expressed as “Oh my God, look at what we can do with videogames now!”

I never felt the same way when I saw Doom for the first time. I know the FPS genre can do so much more than it currently is, but take a first person shooter from the hands of a master craftsman, an FPS game that absolutely maximizes the depth and potential of the genre, and I don’t think it will have a hundredth of the complexity, depth and wonder of an MMO from the hands of a master craftsman who maximizes the potential of that genre.

I’m really enjoying The Secret World but I know the newness is going to wear off at some point in the very near future and then I’ll tune out again, because in the end it’s just another MMO. It’s not the game I’ve been waiting for. I miss how EverQuest made me feel for the first time, realizing that my horizons as a gamer had just spread wide open, and I’ll keep trying new MMOs until I feel that again. It’s only a matter of time. In the interim, please pardon me if I’m really hard on MMOs. I know they can do so much better.