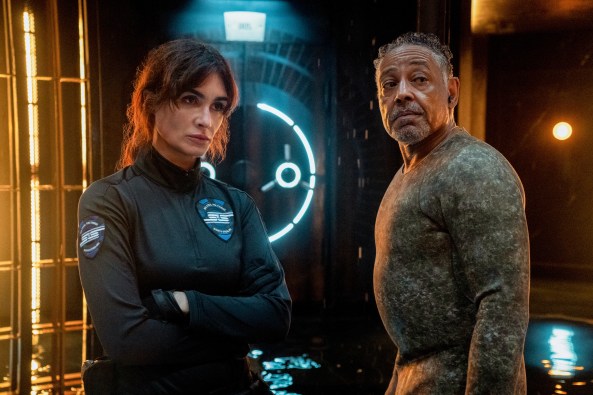 Below is a trailer for Netflix’s upcoming heist series Kaleidoscope, but while it definitely contains scenes from the series and shows off the actors who are in it, it may not actually be a representation of the series you experience at all. That’s because, as we previously reported, Netflix and series creator / showrunner / executive producer / writer Eric Garcia have come up with a show that will be experienced in a different order by different viewers when it debuts on January 1.

So while this Kaleidoscope trailer may seem like a pretty straightforward heist, the series actually takes place over the span of roughly 25 years, and you may enter it from a different time and point of view than your friends watching. The idea is that, depending on where you enter the eight-part series, you’ll get a different perspective about it, possibly aligning yourself with different characters. It isn’t super clear just how the episode order will be assigned, but Netflix gives an example that “some members may start with certain episodes (like episodes ‘Yellow’ or ‘Green’), then move deeper into their own personal viewing order with varying episodes (‘Blue’ or ‘Violet’ or ‘Orange,’ followed by ‘Red’ or ‘Pink’) until the epic ‘White: The Heist’ story finale.” As you can tell, each episode has a color coding, and each one takes place in a different time period from the heist itself.

Kaleidoscope stars Giancarlo Esposito, Paz Vega, Rufus Sewell, Tati Gabrielle, Peter Mark Kendall, Rosaline Elbay, Jai Courtney, Niousha Noor, Jordan Mendoza, Soojeong Son, and Hemky Madera. In the show a crack team of thieves will try to break into the most secure vault in the world to steal $70 billion, a heist very loosely inspired by the loss of $70 billion in bonds during Hurricane Katrina. While the trailer itself doesn’t set the show apart too much from other heists (aside from anything with Esposito in it being awesome), the concept of a series that can be watched in different orders is something that actually uses the medium of streaming to deliver a new kind of entertainment, and that should be celebrated. The show is noted to be an anthology series, so if this season takes off, expect more out-of-order genre shows to come out as well.

Kaleidoscope debuts on Netflix on January 1.