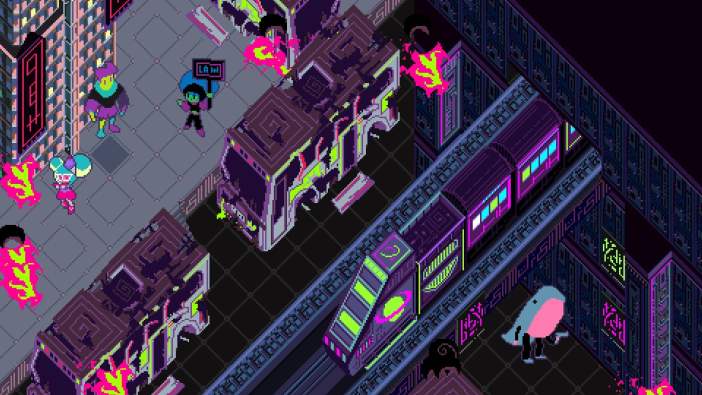 During The Escapist Indie Showcase, developer Moonana unveiled its latest turn-based role-playing game called Keylocker. Taking place in a cyberpunk world that exists without music, players start a riot against the system and attempt to bring songs to the masses by forming a band. Of course, that is easier said than done when music has been outlawed, so expect plenty of battles along the way.

Similar to the developer’s previous turn-based RPG, last year’s Virgo Versus the Zodiac, there is more action than simply selecting different attacks from a list of abilities. Going with its theme of music, players will be able to boost some attacks by playing a rhythmic mini-game that requires players to press certain directions to the beat of a song. The combat grows more complex as the game goes on, as players recruit musicians to their party and go up against more resistance.

Keylocker is a unique blend of rhythm and strategy. The debut trailer even shows off sections reminiscent of Rock Band, where there are four lanes of notes to play.

This is Moonana’s second title as it released Virgo Versus the Zodiac to a positive reception in December. That JRPG features combat and exploration similar to those of the Mario & Luigi series and cites Nintendo’s Mother series as another inspiration. Similar to Keylocker, Virgo also blends genres as it has vertical shoot ’em up sections that test players’ reflexes.

While no release date is currently set for Keylocker, it can be added to wishlists on Steam. The developer can be followed on Twitter and its official website for future updates.