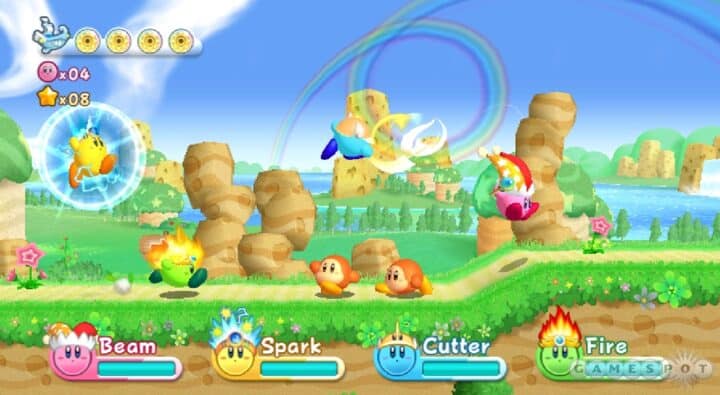 The ports just kept on coming at today’s Nintendo Direct. While we got almost none of the Zelda port/remake news we were hoping for (though we did get the BOTW2 name reveal), another Nintendo mascot did get some. Kirby’s Wii adventure Kirby’s Return to Dream Land will be making its way to the Switch with Deluxe tacked onto the end of the name, and its announcement / release date trailer reveals a February 24, 2022 launch.

In classic Kirby fashion, a mysterious spaceship crash-lands on Planet Popstar. To help the mysterious Magolor, Kirby and his friends set off on a captivating quest. Here’s the full rundown from Nintendo:

The heroic puffball’s Wii game is returning … this time in deluxe proportions! One day, a mysterious spaceship crash-lands on Planet Popstar. To help the mysterious Magolor, Kirby and his friends set off on a captivating quest. When inhaling certain enemies, Kirby will gain access to a wide range of Copy Abilities – with the new Mecha Copy Ability making its debut! The game supports multiplayer for up to four players on the same system by sharing Joy-Con controllers. Plus, everyone can play as Kirby at the same time while using their favorite Copy Abilities! There’s also a collection of subgames to play, including returning ones like Samurai Kirby and new ones like Magolor’s Tome Trackers. The Kirby’s Return to Dream Land Deluxe game launches on Nintendo Switch on Feb. 24, 2023. Pre-orders begin today in Nintendo eShop and in the My Nintendo Store on Nintendo.com.

Return to Dreamland is definitely one of Kirby’s better outings, and getting to play it on the go with updated graphics and a slew of new features and games is no slouch. New mini-games on most games may sound like nothing, but Kirby games have always been pretty fantastic.