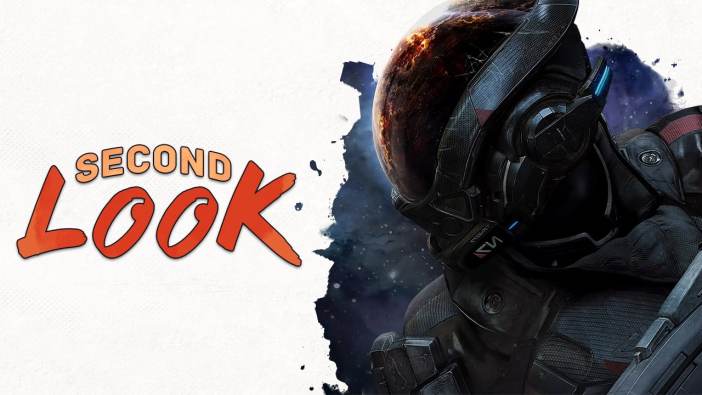 Okay, everyone get out your popcorn. We’re talking about Mass Effect: Andromeda. In fact, we’re doing a two-parter on this one. For this first part, we’re looking at what makes a lot of the things Andromeda was dismissed for actually a meaningful commentary on agency, empathy, and deconstructing problematic action-adventure tropes.

Mass Effect: Andromeda kicks things off with a multi-species colonization effort from the Milky Way galaxy to the titular Andromeda galaxy’s Heleus cluster. It’s a preventative measure to ensure someone survives if the invading Reapers succeed in their conquest during the preceding Mass Effect 3, and it’s also a convenient way to avoid the three endings of Mass Effect 3.

Despite being developed mostly by a fresh-faced team at BioWare Montreal, Mass Effect 3’s shadow looms over Andromeda even now. Fans wanted more dialogue choices, new worlds and aliens to meet, better romance arcs, faster gameplay, and nothing resembling the controversy of the preceding game. Over a tumultuous development cycle, a fair number of these demands were met, just not in the way anyone was expecting.

A fundamental mistake to make when playing Mass Effect: Andromeda is expecting it to just be more Mass Effect in the way players remember it. The original game was about the first human Spectre, essentially an all-powerful arm of the law who could do whatever was necessary to protect the galaxy, and in every origin, the character was a former space Marine. The entirety of the original trilogy, brilliant as it is, clearly frames itself around the more bombastic and familiar appeal of games like Gears of War and Star Wars: Knights of the Old Republic. It’s easy to make being a soldier intensely engaging in a video game. Which is where Andromeda faces its first hurdle. 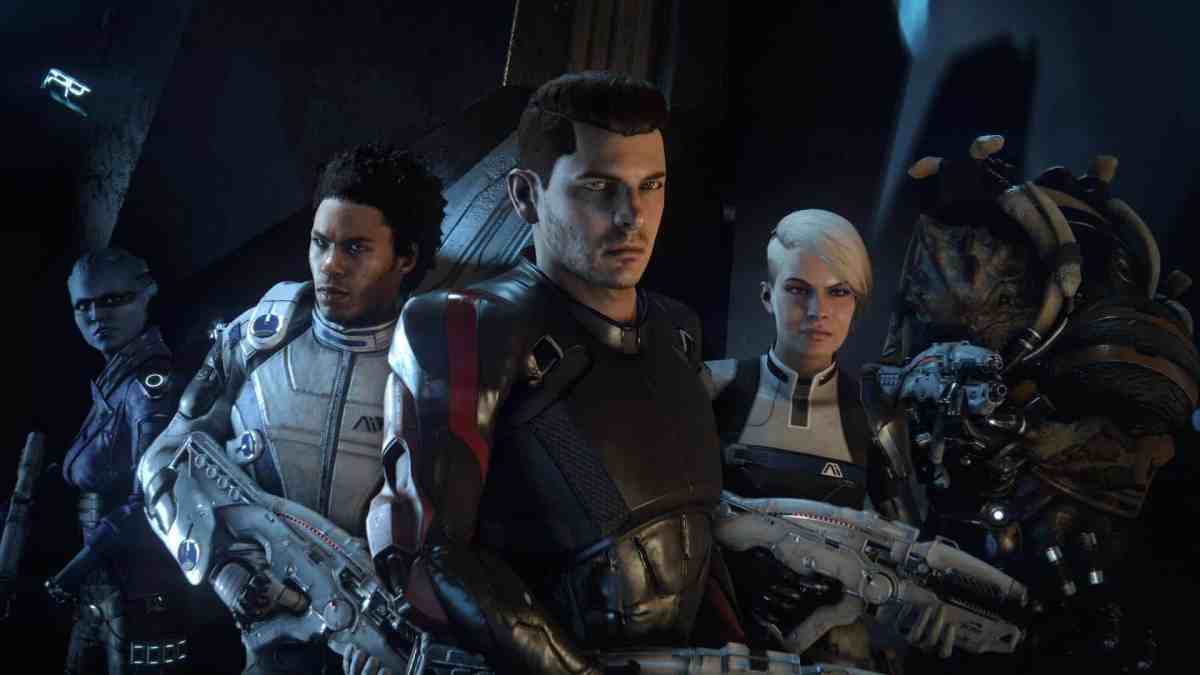 Mass Effect: Andromeda isn’t about an epic war of massive proportions. Almost half the game is spent dealing with smaller threats across the Heleus frontier after the Andromeda Initiative’s plans go haywire due to ancient terraforming alien technology souring all their colonization efforts. While there is a major threat in the form of the eugenics-worshipping aliens known as the Kett, you can go upwards of 10 gameplay hours before worrying about them. Instead, your role first and foremost is as one of two twin explorers, replacing your late father as humanity’s Pathfinder.

Whether you choose to play as Sarah or Scott Ryder, each of them is inclined towards thinking things through rather than going in guns blazing. The twins are trained well enough and the combat design of Mass Effect: Andromeda is marvelous, but charging into most situations without careful consideration can end poorly for you and the Initiative. You have to find somewhere people can live, learn everything you can about each habitable world, and work to ensure peace with Andromeda’s natives, the Anagara.

It’s clear the team at BioWare Montreal understood that there was no getting away from venturing into the territory of colonialism. You’re literally establishing sovereignty over foreign soil, not to mention interacting with a culture that’s already suffered at the hands of the Kett’s imperialistic exploitation. What’s fascinating is, as the Initiative’s only ambassador at the start of the game, Mass Effect: Andromeda forces you to confront how to handle difficult situations. You have to decide whether you’ll listen to and respect the other cultures around you or barge in doing it how you see fit. 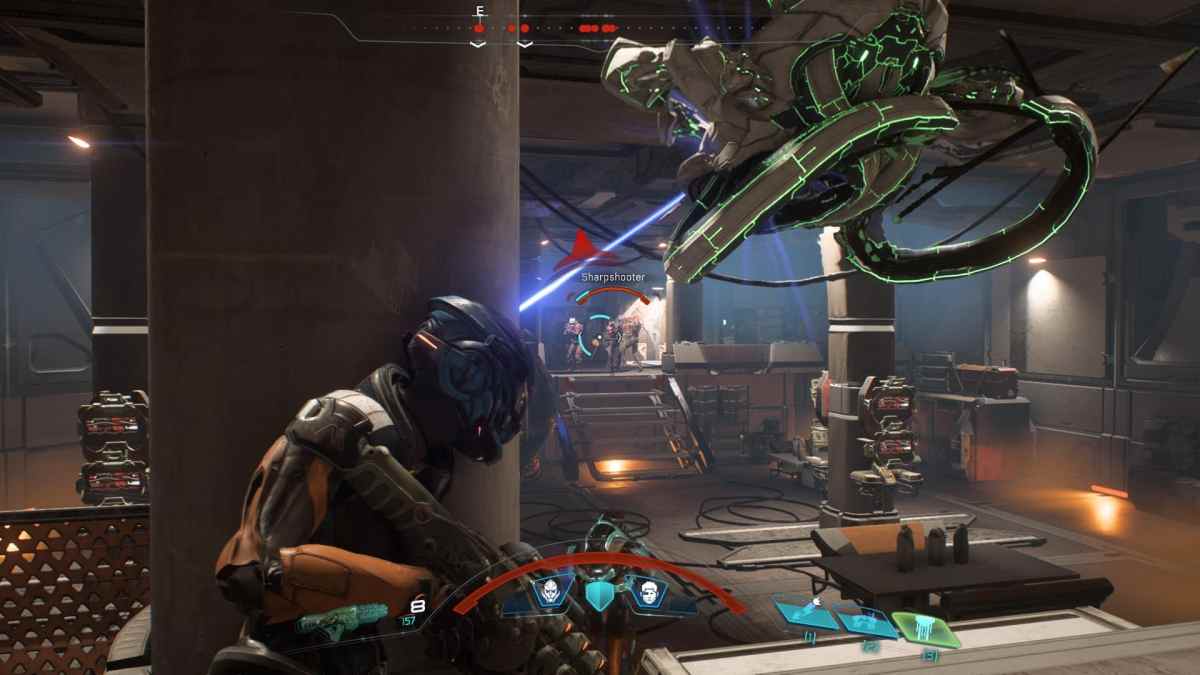 This is part of what makes Andromeda’s maligned new dialogue system much more reasonable. While, yes, the idea of creating a personality profile for your Ryder is finicky due to not always having every emotional option available to you, that’s because it’s not just about you. Ryder can’t be sarcastic when trying to make amends to one of the Angara’s VIPs for going against her wishes. However, appealing with logic or addressing the fallout with empathy are choices that make tangible sense. These choices aren’t about who you want Ryder to be, but how you want to influence those around you. No one dialogue choice will guarantee you success — in fact, relying on a single personality trait will more often cost you ideal outcomes for certain quests.

Mass Effect: Andromeda leans into this thread hard with several key missions regarding the Angara and an exiled Krogan colony. The Kett abused the Angara’s kindness, and the Angara are now rightfully wary of outsiders. Some Angara will take arms against you, and for many it takes great lengths to prove that the Milky Way’s inhabitants aren’t invaders. This includes your party’s Angaran companion Jaal, who’s loyalty mission hinges on you trusting his judgement and agency. Going against his wishes only escalates an already troubling situation with an insurgent Angaran group, ensuring that the Angara and Initiative will always have terse relations.

Meanwhile, the Krogan were given the runaround by corrupt Initiative officials when the Initiative’s hub, the Nexus, underwent a rebellion that the Krogran helped put down. They’re as much a part of the colonization effort as anyone but in the end were betrayed, leaving them to choose exile to strike out on their own. The Krogan not only achieve a stable colony, but they do it without any of the ancient technology Ryder unlocks over the course of the game to restore several habitable worlds. When you arrive at their doorstep, it’s their turf now, and it’s on you to either make reparations or burn that bridge for good. 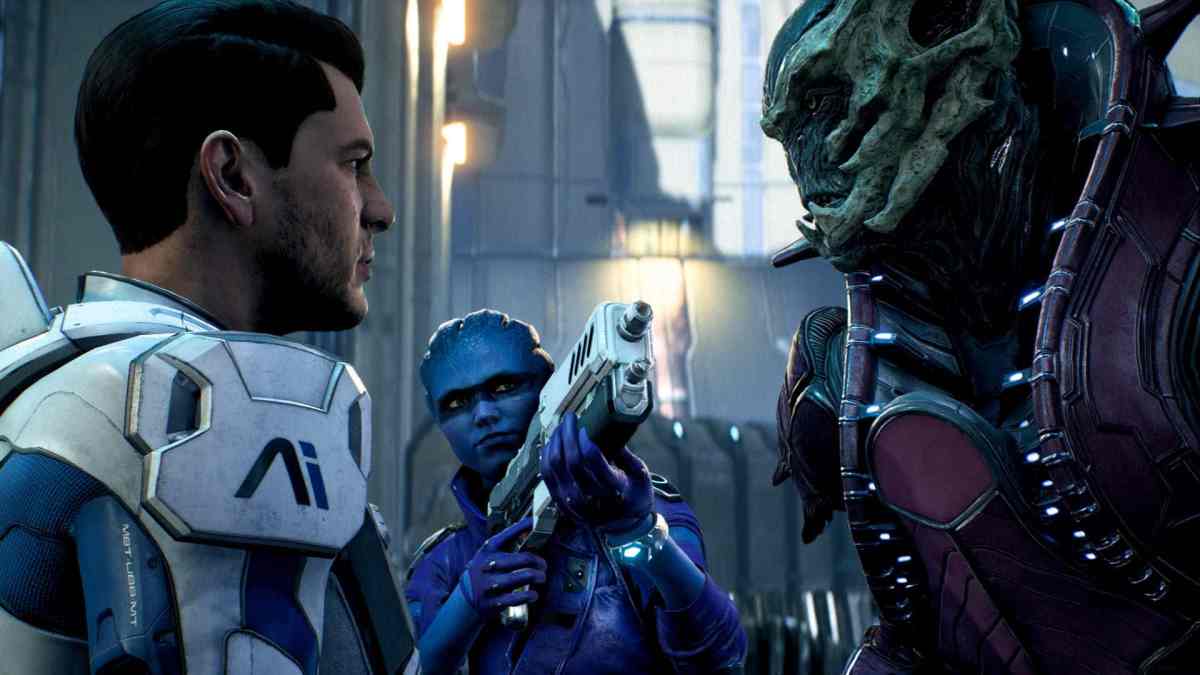 These are all major threads that take up just as much of your time as fighting the Kett, and I’m only touching on a fraction of Mass Effect: Andromeda’s story. This emphasis on empathy versus self-centrism. There’s a documentary crew interviewing you where you can either play to the Initiative’s propaganda or be honest about the realities of your efforts to the public. You’ve got a religious science officer, and if your Ryder responds from an aggressively atheist point of view, you’ll not only clearly lose respect with her, but she’ll cut the conversation off entirely as politely as she can manage. It’s possible to even lose the trust of NPCs and outright fail certain side quests to a degree the original trilogy never really let you explore. Andromeda lets you make your own messes and live with the consequences.

We’ve had a number of games explore cause and effect, but few have used those underlying systems to explore whether or not the player will take on an oppressive or constructive role in other characters’ societies. It’s a shame the odds are low for a direct Andromeda sequel, because playing out these sorts of choices could make for amazing story branches down the line. Ryder’s journey is an incredibly timely one, raising questions most Western games seem afraid to touch on.

Sadly, this ambitious goal also results in the game sometimes feeling drawn out and muddled. Working through systemic issues on multiple planets can only offer so much action, with a lot of the bigger moments of payoff waiting on the horizon. It’s not that the developers don’t know how to do rock-solid moments that evoke classic sci-fi adventures, such as the stellar companion loyalty missions and several of the climactic fights with the Archon. However, to explore the sort of setting Andromeda aims for requires a more patient play style, with lots of exploration and brief dialogue exchanges rather than constant explosions. 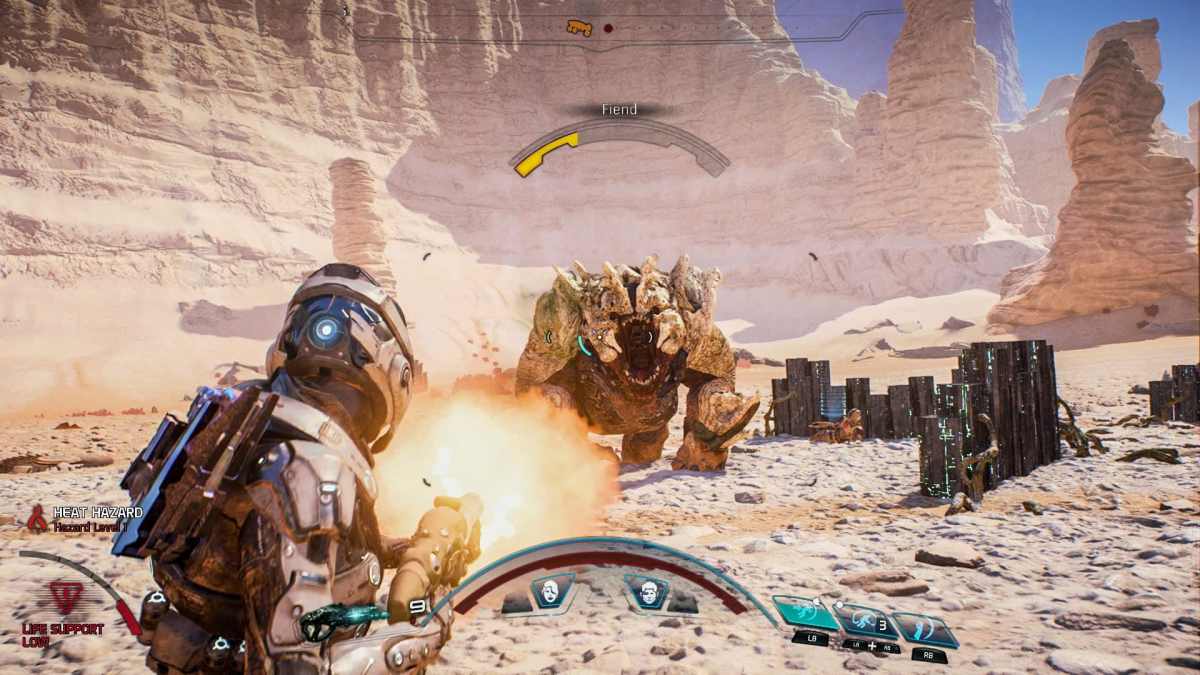 I think this is what people actually mean when, even defending Andromeda, they say it’s a bad Mass Effect game. It’s not bad Mass Effect; it’s just a different flavor than we’ve seen in the games. The universe’s expanded material has had a much wider range of themes and tones — Andromeda’s final tie-in book, Mass Effect: Andromeda: Annihilation, is a murder mystery conspiracy thriller set aboard a colony ship for crying out loud.

Even if Andromeda had enough time to be fully polished, or were built in a game engine that isn’t notoriously hostile to work with, I don’t know if everyone would’ve been on board with Andromeda. It’s an inherently different beast from its predecessors, yet it’s unquestionably built into the world of Mass Effect as a cohesive piece to the greater puzzle.

I don’t say this as an absolution of Andromeda. It’s a messy game, and we’ll be digging into what its real problems are next week. But I can’t help but feel the accusations against its storytelling are a matter of expectations not matching up rather than an actual drop in quality. I consulted several friends who also played the game when writing this piece, most of whom are members of minorities, and to many of them, Andromeda felt nuanced, if flawed. It genuinely tries for more complex ideas and characters. It’s less Star Wars and more Star Trek, which is something Mass Effect in general has been working towards over the course of its run.

I could go on about how your companion Jaal is one of the best examples of healthy masculinity in gaming, that Cora is a marvelous alternative to Ashley Williams, how Andromeda’s approach to romance is far more mature and modern, and that this might be the strongest portrayal of Krogan society since Mass Effect 2. Mass Effect: Andromeda is a living, breathing world — it’d be a shame to waste because of some meme-able polish issues at launch. More than ever, it’s absolutely worth a second look now that it’s finally on Steam and of course regularly on sale on consoles.