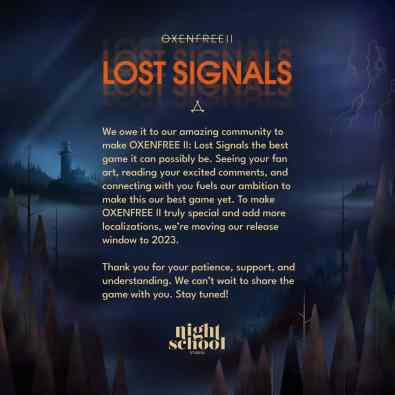 Last year, Oxenfree II: Lost Signals was announced at the Nintendo Indie World Showcase. The sequel to the original, spooky Oxenfree, the title was supposed to appear on PC, PlayStation 4 and 5, and Nintendo Switch sometime this year. This is no longer the case. Developer Night School Studio just dropped the news Oxenfree II: Lost Signals now has a delay. It will now launch in 2023.

Here is the official announcement:

We get the usual wanting to make “the best game it can possibly be.” Having to wait a little longer is a shame because the title looked great based on our preview. A lot of games sure are getting delayed to next year. A sparse 2022 is leading us towards a stacked 2023. Our wallets are already crying.

In happier news, Oxenfree: Netflix Edition has hit the Google Play and iOS store. It has no advertisements, no upfront payments, and is downloadable from the Netflix app, too. The game is very narrative-driven and has little action, so it’s perfect for a mobile format. The only issue is Netflix now owns Night School Studio. Indeed, the game disappeared from mobile storefronts after the acquisition, only reappearing today. That means players need a Netflix account in order to play Oxenfree on mobile devices. 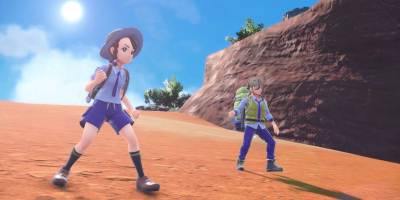 How to Find All Paldean Tauros Forms: Pokémon Scarlet and Violet