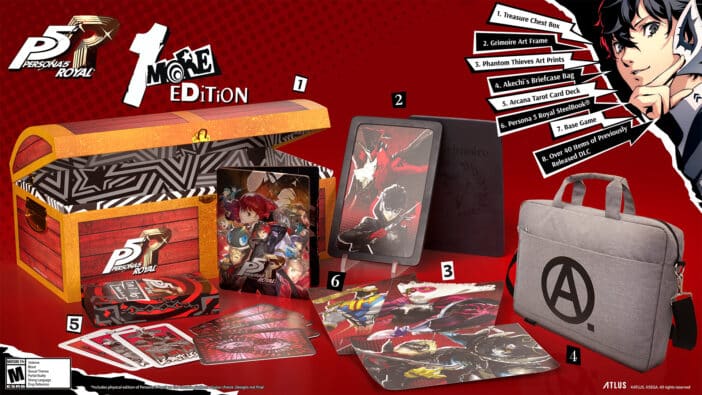 Persona 5 Royal is one of the all-time best RPGs, and Atlus is continuing to celebrate its accomplishments by revealing the collector’s item-filled 1 More Edition. Costing a somewhat pricey $119.99, this limited edition comes with physical and digital items for players on Nintendo Switch, PlayStation 5, Xbox One, and Xbox Series X | S. Unlike those recently announced God of War Ragnarok Collector’s Editions, the Persona 5 Royal 1 More Edition will include the physical game itself when it launches later this year.

As for all of the extras coming in the Persona 5 Royal 1 More Edition, purchasers can expect a plastic Le Grimoire art frame and a set of 5″x7″ art prints for that frame. There’s also a 24-card arcana tarot deck, a briefcase bag modeled after the same bag Akechi uses, and a stylish SteelBook case for you to keep your game tucked away in. All of these items — as well as 40 pieces of previously released DLC content — come in a fun treasure chest box. Your physical copy of Persona 5 Royal will ship before launch on October 21, 2022, with Atlus estimating that collector’s items will ship sometime in late November. Preorders are open now on the Atlus website.

And of course the Phantom Thieves love a little extra treasure! ~

Persona fans have been treated to more than collectibles this year, with Atlus revealing in June that Persona 3 Portable, Persona 4 Golden, and Persona 5 Royal will all come to PC, Switch, Xbox, and PlayStation consoles. Keep checking in for more on the developer’s critically acclaimed RPG series. In the interim, Atlus parent Sega revealed the first look at turn-based RPG Like a Dragon 8 this morning.