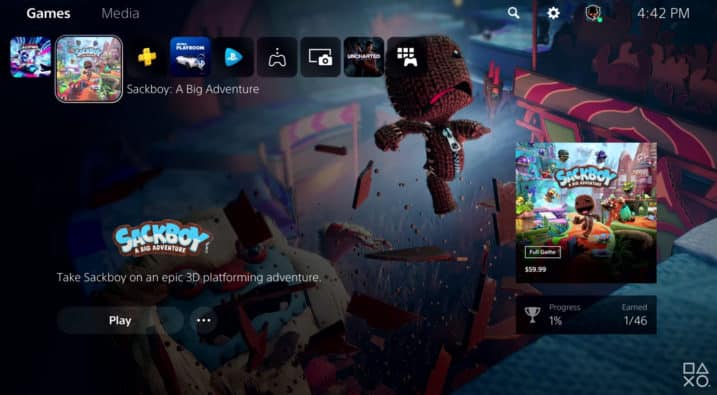 Sony has finally unveiled much of the PlayStation 5 user interface (UI) and user experience. The company published a video today showcasing the looks that the next-gen console will offer to buyers starting launch day, Nov. 12. Here, we get a look at a lot of the UI, including how the new Create button works, what the home menu looks like, and many more new features.

First and foremost, Sony is (unsurprisingly) attempting to streamline the entire experience with the PlayStation 5. The demonstration begins in-game with Sackboy: A Big Adventure, where we get a good look at how the control center works. The Control Center offers much of the same standard information that it did on the PlayStation 4, such as the DualSense controller‘s battery life or friends online, but the menu also brings up something known as cards – blocky menu items that highlight news, screenshots, Activities, game help, and more.

Many of these new PlayStation 5 features are integrated into specific games, with the Activity card serving as a home for in-game objectives. Official Game Help, for example, is a new activity card feature exclusive to PlayStation Plus subscribers that will be available for “some” PlayStation 5 titles. Players running into trouble with certain objectives, or those unable to find hidden collectibles, can use game help for a spoiler-free guide that offers walkthroughs and hints to help overcome obstacles. The Activity card can do more, such as display the estimated amount of time it will take to complete or finish the remainder of a level.

The home menu itself, which is interestingly similar to the menu system seen on the PlayStation 3, is given quite the spotlight, where it is shown what players will see when booting up the PlayStation 5 from a powered-off state. Again, sharing content with friends, jumping between games, and most general menu scrolling seems to be much quicker here than on the PlayStation 4.

Those of you hoping to learn more nitty-gritty details on the PlayStation 5’s UI are in luck; Eurogamer tech branch Digital Foundry shared an in-depth write-up on the next-gen console’s new UI. Some highlights from the article include the fact that the process of loading up a new game takes around eight seconds, screenshots and video are captured at 4K resolution, and the entire experience renders at a native 4K and supports HDR from the get-go.

So with the PS5 user experience, we are re-imagining the way the game works together with the hardware and network, delivering a truly next generation experience. The UX is completely centred around the player and we’re connecting players with gameplay – and a passionate community of gamers. So that’s the philosophy. We worked on this over the last several years, and we got together and as a single team across London, the United States and Tokyo, and we are happy to show you the result of that.

The standard PlayStation 5 and its all-digital counterpart launch on Nov. 12 for $499 and $399, respectively.