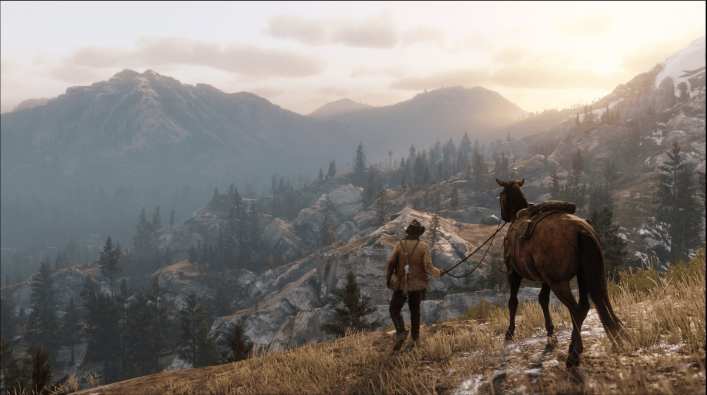 Sometimes I get angry at video games. Specifically, I get angry at video games when I’m bad at them, and I’m often bad at them. Not always, mind you. I dare say that I could take 90% of all comers in a multiplayer Paradox Interactive grand strategy game like Europa Universalis IV, which should give you a decent guess at the other games I am bad at.

Hint: it’s most of the others.

When I’m feeling particularly self-deluded I like to pretend that there’s a kind of tragic nobility to persistently playing games I’m bad at. “Yes,” I might say to myself while playing Red Dead Redemption 2, “I did just run my horse off this cliff while evading the law after shooting a can of beans that I was actually trying to buy, BUT I will get back up, dust myself off, carry my dead horse’s saddle four miles back to town and tame this Wild West yet!”

This would all be fine if that delusional stoicism held fast in the face of persistent adversity, but no. Eventually the challenge mutates into a kind of personal offense and like a colicy baby with all of the diaper rash and none of the talcum powder, I am too often prone to ridiculous little tantrums when a game goes astray.

The thing is, I’m supposed to set a positive example of sportsmanship and patience and self-control for my impressionable children, which is a patently ridiculous concept, but here we are.

My oldest son, David, gets his temperament from his mother, who is even keeled and doesn’t seem perturbed at all by the actions of machines, no matter how insubordinate they seem to be. They both wield the grand and imperturbable power of the on/off switch like a confident god. If something digital crosses either of them, they just turns the thing off and walk away.

I don’t understand how they do this. That’s not victory. That’s not emotional catharsis. Yet, there they are, perfectly happy to just move on having not won a game. Maybe they’re robots or something.

David seems to get the most upset when his friend Mark does something apparently dumb while they are playing Overwatch together. I don’t know what it is about Mark specifically, but among the group of five or six friends that David always plays with, it’s always Mark that runs afoul. As a result, it’s become commonplace to hear the occasional shout of “MARK!” from across the house. This rebuke has become so regular that the name has become an unofficial metaphor for benign disappointments of all kind.

“Who put this empty milk jug back in the fridge? God, MARK!”

“MARK! Why can’t I find a matching pair of socks!”

To be fair, what I usually hear David say to Mark is something along the lines of, “If you play as Hanzo one more time, I swear to god I’ll fire you into the burning heart of the sun!”

Arguably, this is a completely reasonable sentiment.

My younger son, Micah, is far more like me. One of his recent obsessions is playing Geometry Dash on his phone. The game is described on its Steam page as a “rhythm-based action platformer,” but I would call it a diabolical frustration generator in which you guide a tiny box through impossible levels crafted by agents of the seven hells until you cry.

Micah once asked me to try the game for all of five minutes, and I gently handed him back his phone and only half-jokingly promised that if he made me play it again I would ground him forever.

It’s not a bad game, and it has a passionate following, but to me it’s a little like choosing raw ghost peppers for a light afternoon snack. I want nothing to do with that, and I’m fairly convinced you’re engaging in deeply self-destructive behavior if you do, but to each their own I guess.

Micah has become very good at the game, and will plug away at these hateful challenges over and over again. For a while things are fine, but inevitably he enters an all too familiar cycle where there is no putting the game down until he wins, but his growing anger at the game prevents him from achieving that victory. And so he rides the downward spiral like Trent Reznor on a bad day.

There comes a point where I know I must intercede with a shared feeling of parental purpose and shameful hypocrisy. The parental purpose is there because if he throws his phone across the room — and I know deep down that’s what he wants to do — there will be significant consequences, and that’s going to be a whole big thing that nobody wants. The hypocrisy is that throwing that phone is exactly what I’d want to do in his place. If I’m honest, there’s a place deep in the weakest parts of my brain that’s vaguely cheering him on. “Hell yeah, you show that phone who’s boss! Wait, I payed for that thing, oh NOOO!”

I was recently playing Slay the Spire, which is a brilliant PC deck-building game that I’ve invested a few hundred hours in this year. The game can sometimes activate my childish temper when the particular card I need is buried at the very bottom of a 25-card deck … for the third time … this fight alone! And, as we’ve established, the part of my brain that sometimes isn’t great at distinguishing between unfortunate random number generation and an intentional act of willful aggression is too quick to push the big red button in my brain marked “TANTRUM!”

In these moments, there is a battle waged in my mind, a fierce struggle for control between the forces of reason that seek to model good behavior and the power of adrenaline-fueled reactionism. And at that moment, when the battle is most pitched, Micah casually walks in. Now I must not be the temperamental gamer. I must be dad.

His eyes lock on me, and see a familiar struggle. I return his gaze in a way that I hope is fatherly, and fix my voice best I can into complete neutrality. “Buddy,” I say, “I’m very upset at my game right now, just like you were the other day. But do you see how I’m not getting upset and throwing things?”

“Yeah,” he says, not nearly as impressed as he should be.

The dad facade probably wavers, but I hold onto it.

“The point, kiddo, is that you can’t always help how you feel, but you can always take ownership of what you do. You are responsible for that.”

This is not what he came in here for. To him, this probably feels apropos of nothing, and so he begins to feel preached at, which is fair but annoying. I tack into a course with the wind at my back. “We’re a lot alike, you and me.” He perks back up a bit, because I know he likes being compared to adults. “So, if I can do it, then you’re going to be way better at it than me.”

He smiles patiently with a very “yeah, um, anyway” kind of expression, and pulls out his phone to show me a level he’s building in Geometry Dash because, like I said in the last article, he’s my architect. He is at best only passingly interested in whatever internal conflict I seem to be dealing with, and moves past it quickly. The storm in my head begins to subside as I watch him build something that’s going to frustrate someone else with a kind of mischievous pride.

I half wonder who was the adult in this situation because I’m not totally confident it was me.

Maybe it’s a truism of parenting that trying to do your best has as much to do with teaching your kids how to be a well-adjusted adult as it does teaching yourself the exact same thing. Maybe that’s just something we tell ourselves so that we can feel like we’re doing OK even when it’s obviously self serving.

Either way, I’ve still got a lot to learn, but I’m thankful that my kids are doing a pretty good job teaching me. Here’s hoping they don’t figure that out until they’re 30.