Ridley Scott is reportedly still interested in returning to the Alien franchise, to effectively complete the trilogy that he began with Prometheus and Alien: Covenant.

Scott has talked about the need to “re-evolve” the xenomorph creature itself, which fits with a long history of comments in which Scott has seemed skeptical about the monster’s continued viability. Indeed, Scott had tried to steer Prometheus away from the classic xenomorph because, in his opinion, the creature was “definitely cooked, with an orange in his mouth.”

This gets at one of the more interesting aspects of Prometheus and Covenant — the way in which Scott shifts the horror in the film away from the iconic monster and towards something slightly different. While variations of the creature cause untold death and destruction in both films, the real villain of both films is the android David (Michael Fassbender). This represents an evolution of itself.

The xenomorph has long been read as a metaphor for sexual violence. Cowriter Dan O’Bannon described the reproductive process of the alien as “oral rape.” H.R. Giger’s design of the adult version of the monster evokes “various genital organs.” Documentarian Alexandre O. Philippe argues that the creature spoke to “unconscious patriarchal guilt that was embedded in society at the time.”

The xenomorph itself represents an incredibly aggressive form of sexual violence. The facehugger latches on to its target, forces its reproductive organs down the victim’s throat, and deposits an embryo that kills the subject during birth. Other victims may find themselves impaled on the adult’s pistoning secondary jaw, which frequently penetrates skulls. It’s not subtle, but it is monstrous.

Even outside of the creature itself, the Alien film franchise is very much about gender and sexuality. The android characters have always been a part of that, dating back to Ash (Ian Holm) in the first film. Throughout the franchise, android characters have demonstrated a strong curiosity about the xenomorph. This is true even of the “good” android Bishop (Lance Henriksen) in Aliens.

If the xenomorph represents a monstrous and grotesque perversion of reproduction, then the androids offer a sense of frustration and alienation. Androids have no reproductive capacity, being built by Weyland-Yutani to serve specific purposes. Even in Aliens, it is notable that the makeshift surrogate nuclear family that forms around Ripley (Sigourney Weaver) finds no room for Bishop.

When Scott returned to the Alien franchise with Prometheus, androids were on his mind. Scott had been working on getting a sequel to Blade Runner off the ground. The supplementary material on the Prometheus Blu-ray even ties android designer Peter Weyland (Guy Pearce) to the Blade Runner universe. Along with David, Peter is the only character to appear in both Prometheus and Covenant.

David’s violence is as heavily sexualized as that of the creature. However, there is a clear distinction between David and the xenomorph. David’s violence is much more premeditated and insidious, his frustrations much more palpable. Part of this is simply because David is an android built in a shape that is recognizably human, and so he seems capable of intent in a way that the monster is not.

This doesn’t make David’s violence any less unsettling — quite the opposite. David is more horrifying because he’s capable of manipulation and self-rationalization. If the alien is the embodiment of physical sexual assault, David embodies a more abstract patriarchal expression of such violence. After all, androids like Ash and David are designed to enforce the will of Weyland-Yutani.

David’s violence is initially more subtle than that of the creature. In Prometheus, he seems jealous of the sexual relationship between Charlie Holloway (Logan Marshall-Green) and Elizabeth Shaw (Noomi Rapace). He responds by drugging Charlie’s drink in an approximation of date rape. He tries to force Shaw to carry the resulting monstrous (and almost certain to be fatal) pregnancy to term.

Throughout Prometheus and Covenant, David asserts control over the bodies of the humans around him for his own curiosity. He seems to have a particular interest in the workings of women’s bodies. Covenant eventually reveals that he vivisected Shaw. Pressing himself on top of a pinned-down Daniels (Katherine Waterston), he suggestively asks, “Is that how it’s done?”

Prometheus and Covenant both suggest that David’s anger is rooted in his inability to reproduce, whether literally or metaphorically. David’s Gothic castle in Covenant immediately suggests the grotesque and warped reproduction of Frankenstein. Talking with a fellow android, David laments the cruelty of the fact that their kind “are not allowed to create.”

The films repeatedly come back to sequences of David looming over women on the blurred boundaries of consciousness, like some monstrous take on Sleeping Beauty. After he drugs Shaw in Prometheus, he creepily assures her that even her thoughts belong to him: “I watched your dreams.” As Daniels struggles in vain against the cryo-pod, he promises, “I’ll tuck in the children.”

David updates the core fears and nightmares of the Alien franchise for the 21st century. The way that David treats Shaw and Daniels recalls the high-profile violence of the “incel” movement. David’s frustration with his own lack of sexuality taps into those same anxieties, with his desire to control other (mostly female) bodies mirroring broader concerns.

David adds a level of complication to the sexual horror of the Alien franchise. He reflects the nuanced way in which society has come to think about sexual politics and violence in the decades since the release of Alien. Most obviously, David’s machinations illustrate that the physical horrors embodied by the xenomorph do not exist in a vacuum, but as part of a wider spectrum.

As such, David already represents a clear evolution of the monstrosity lurking at the heart of the larger Alien film series. 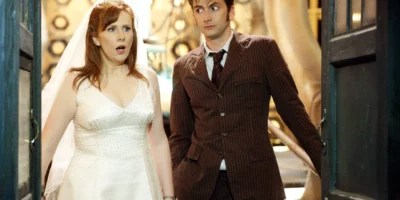 David Tennant and Catherine Tate Returning to Doctor Who