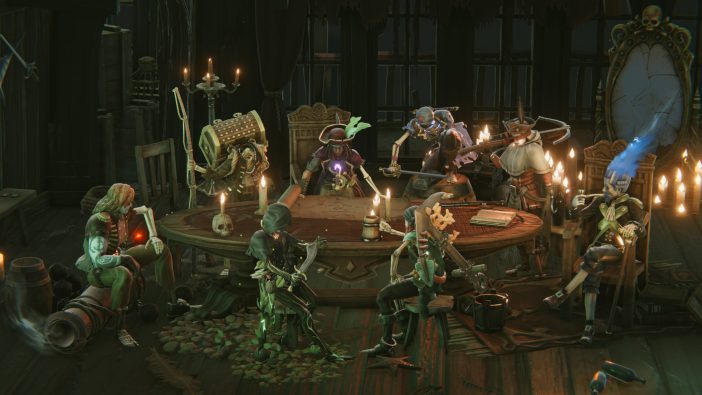 Shadow Tactics and Desperados III developer Mimimi Games has revealed Shadow Gambit: The Cursed Crew, a tactical pirate heist game coming to PC, PlayStation 5, and Xbox Series X | S in 2023. The studio cracked open a treasure chest full of details for its next game today, including a very pirate-y CG announcement trailer and a whopping seven minutes of gameplay. You can get a taste of Mimimi’s ghostly Lost Caribbean in the former video below.

The dead are restless in this stealth-strategy title set in during an alternate-history version of the golden age of piracy. Your supernaturally enhanced crew sails aboard a living ghost ship while completing sandbox-style missions that encourage creativity and experimentation. As you and your ghostly brothers and sisters set out in search of a mysterious treasure, you’ll need to outsmart and beat a band of pirate hunters known as the Inquisition of the Burning Maiden. Thankfully, Shadow Gambit: The Cursed Crew lets players assemble their team how they please, so you can approach every mission with abilities and personalities that suit any plan.

Your ship of operations is the Red Marley, and while it sounds like the perfect place to plot, it also serves as a home where you can get to know the undead you’ll be traveling with. Shadow Gambit: The Cursed Crew features time manipulation gameplay, abilities to combine, and lots of player freedom, and you can learn more about it in the video (with developer commentary) below.