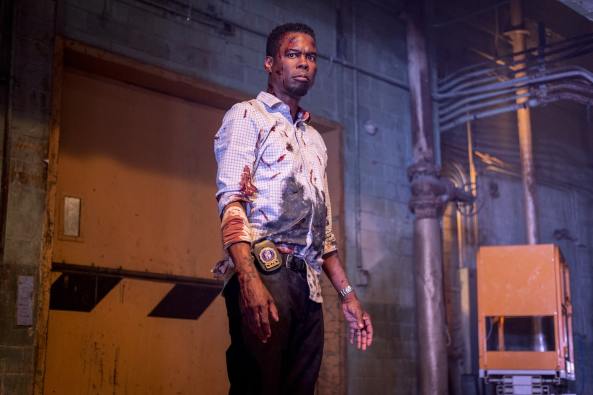 We’ll all find out whatever the hell Chris Rock is doing to the Saw franchise a week earlier as Lionsgate has announced that it is moving Spiral: From the Book of Saw‘s release date up a week to May 14. The film was originally supposed to land last May but was pushed back a full year thanks to COVID-19. The studio is positioning the film as the kick-off to the summer movie season and a return to theaters for audiences as more of them open up across the U.S.

“With movie theaters now open in New York and Los Angeles and moviegoers returning to their favorite pastime, Spiral, starring Chris Rock and Samuel L. Jackson, puts a fresh spin on a favorite franchise,” said David Spitz, President of Distribution, Lionsgate Motion Picture Group. “We know that Saw fans, as well as those experiencing their first Saw adventure, will be on the edge of their seats with this thrilling new film. We are proud to support the exhibitors with one of our most eagerly awaited films. We are confident this film will kick off a robust summer moviegoing season.”

The move gives the film a bit more breathing room from A Quiet Place Part II, which shifted to a May 28 release date, but May is still looking pretty sparse for film releases, especially ones that are releasing solely in theaters like Spiral is. The film is setting itself up to be a strong test of the waters for the rest of the industry as studios eye summer as a hopeful return to a new normal.

Spiral, the title taken from the somewhat iconic imagery from the Saw series, is a reboot of sorts of the horror franchise starring Rock and Samuel L. Jackson. Rock came up with the idea for the film and brought it to Lionsgate who hopped on board, eager to continue on one of its more successful franchises. Rock plays Detective Ezekiel “Zeke” Banks as he begins investigating a series of grisly murders that are reminiscent of ones that took place in the past. Jackson plays his esteemed police veteran father while Max Minghella plays Zeke’s rookie partner. Just how Spiral: From the Book of Saw will connect to the previous Saw movies, which all shared a surprisingly deep continuity, isn’t known.