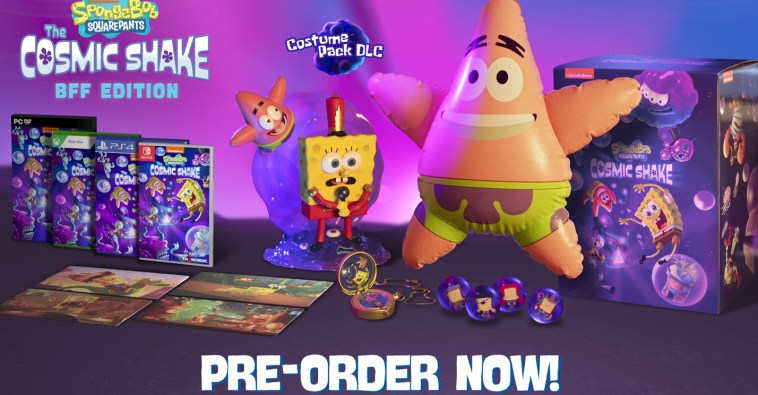 Back in August, we got a good look at SpongeBob SquarePants: The Cosmic Shake. The follow-up to Battle for Bikini Bottom – Rehydrated, the title looked amazingly animated and contained many nods to classic episodes. The gaming public has been awaiting a launch date for the game for some time now, and THQ Nordic has finally revealed it today. SpongeBob SquarePants: The Cosmic Shake has a release date of January 31, 2023 on Nintendo Switch, PlayStation 4, Xbox One, and PC, and preorders are now open for the standard edition and a BFF collector’s edition.

Plot-wise, it looks like SpongeBob and Patrick buy magic bubble soap from a fortune teller and destroy Bikini Bottom. It’s up to them to fix the mess they made. Also, Mr. Krabs’ actual voice actor can be heard at the end. This is an upgrade from Battle for Bikini Bottom, where the developers used a soundalike instead.

Interested parties who preorder The Cosmic Shake will receive the Official Costume Pack, which includes seven additional costumes for free. They contain such greats as Prehistoric SpongeBob and Mermaid Man SpongeBob, so it makes sense to preorder, even though the outfits seem purely cosmetic. Preorders are available via the THQ Noric website. Gamers can opt for the standard edition for $39.99 or the BFF Edition for $249.99. The Cosmic Shake BFF Edition includes the following:

That inflatable Patrick is tempting, not going to lie.