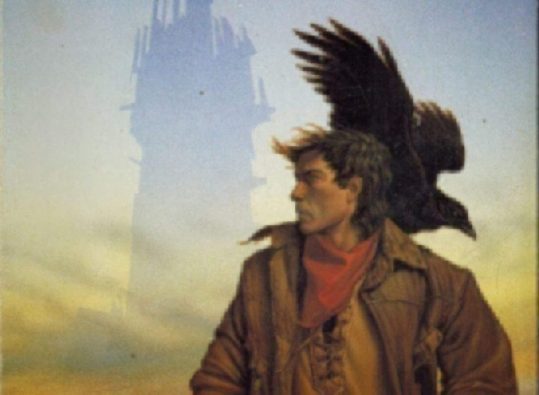 Stop me if you’ve heard this one. There’s a Dark Tower adaptation in the works. Yes, the constantly “being adapted” Stephen King series is once again being adapted. However, this time it might actually happen and not suck as Mike Flanagan and Trevor Macy’s Intrepid Pictures are the ones behind it, and they’ve got plans for not just five seasons of The Dark Tower TV series, but two standalone movies to follow it.

Developing any kind of screen version of The Dark Tower has been the bane of Hollywood for decades. So many names have been attached to different projects that it’s hard to remember who did what when, but eventually a single adaptation was made with 2017’s The Dark Tower, starring Idris Elba and Matthew McConaughey. That movie was a horrible mess that bit off far more than it could chew, and plans for sequels and TV shows that would spin off from it were canceled rapidly. Since then there have been constant murmurings of the beloved King series, which acts as a kind of meta-universe for all his novels, but it looks like Flanagan and Macy are officially on track to start developing The Dark Tower for TV and movies, with the producers having already gotten the blessing of King himself.

Flanagan and Macy are best known for their work at Netflix, where they’ve been housed for the last six years under a contract to produce content for the streamer. The pair put together multiple hits there, including The Haunting and Midnight Mass, but they’ve now left Netflix and are moving to Amazon, meaning it’s possible that the show will end up streaming there. Amazon had already shown interest in The Dark Tower when it began developing a series that never made it past the pilot. That isn’t a guarantee, though, that Amazon will be the home of the series. Intrepid Pictures specifically gained these rights outside of its deals with Netflix and Amazon, so the studio could do its own thing as Flanagan has had this as a dream project of his for years.

Flanagan has reportedly already drafted a screenplay for the pilot and laid out a detailed five-season TV plan that would culminate in the two aforementioned Dark Tower movies. “Well, to be honest,” the director said, “the way that I have seen it breaking out is five seasons of television, followed by two stand-alone features. But I think our priority has been trying to get the television side of it going first. We’re not going to put the cart too far ahead of the horse on such a challenging project, but that I think is the perfect way to do it.”

This also isn’t Flanagan’s first foray into the realm of Stephen King as he directed Doctor Sleep, and he somehow managed to create a satisfying sequel to one of the greatest horror movies ever made, all while pleasing King and paying homage to Stanley Kubrick’s The Shining. No easy feat, and possibly just the right person to adapt something that everyone has claimed is unadaptable.