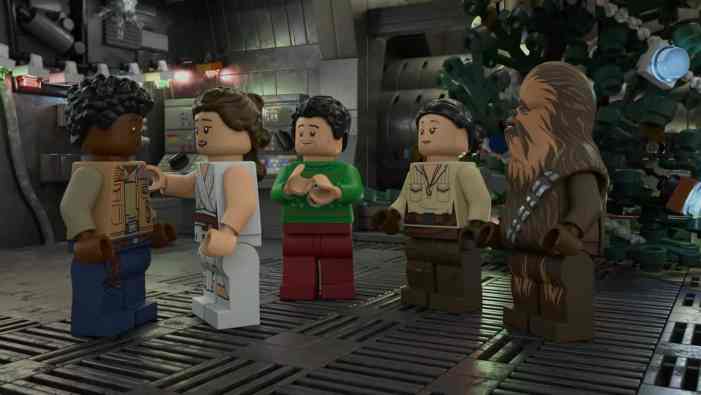 In the annals of all franchises in history, there is nothing quite as weird, cherished, mythical, or, for a time, hard to come by as the Star Wars Holiday Special. Now, however, it appears to be happening again, just in a different way. Disney+ has announced that it is making The Lego Star Wars Holiday Special, which will premiere on the streamer on Nov. 16. This animated one-off will actually recognize and reference the original special, which George Lucas tried to bury deeper than the Ark of the Covenant ever since its release.

The show will take place after The Rise of Skywalker (Maybe it can patch it up even more.) and will literally involve every character you could possibly want according to an interview about it with the show’s executive producer, Josh Rimes, who says it will involve time travel and a possible return of many actors. It’s the holiday special — anything could happen. That includes crazy Life Day celebrations and feasts, but only if Rey can make it back in time from her trip through a mysterious time-warping portal. The special is inspired by It’s a Wonderful Life, Planes, Trains and Automobiles, and Christmas Vacation.

The official synopsis of the show brings Life Day, which was the reason for the holiday celebrations in the original special, back to the forefront of Star Wars lore. Rey leaves her friends to prepare for Life Day as she sets off on a new adventure with BB-8 to gain a deeper knowledge of the Force. At a mysterious Jedi Temple, she is sent into a cross-timeline adventure through famous moments in Star Wars film history, meeting (young!) Luke Skywalker, Darth Vader, Yoda, Obi-Wan Kenobi, and “other iconic heroes and villains from all nine Skywalker saga films.” However, “will she make it back in time for the Life Day feast and learn the true meaning of holiday spirit?”

Tis the season for a festive holiday celebration of the entire Star Wars saga…
Get ready for The LEGO Star Wars Holiday Special, a #DisneyPlus Original, premiering on 11/17. Get all the details on https://t.co/mVXi17qoJk: https://t.co/aKPEO6CKBF pic.twitter.com/vTFw7dDmbF

Anyone who has played any of the Lego Star Wars games or watched the better Lego movies knows how well this offshoot of the franchise can play with Star Wars, and the fact that this part of the franchise is the one set to tackle the original holiday special in some way just makes too much sense. Hell, the upcoming Lego Star Wars: The Skywalker Saga was one of the staff’s top games at E3 last year.

The real question, though, is whether or not this will lead Disney to put the original Star Wars Holiday Special up on Disney+, ending decades of people being forced to watch bootleg versions recorded on VHS and uploaded to YouTube. Lucas spent that entire time attempting to wipe the special from existence, but Disney may not feel that way and has at least acknowledged Life Day as a thing in The Mandalorian. Though if it does drop, will some of the magic disappear? Isn’t one of the best holiday lessons to be happy with what we have? And in this case, that’s way more than we ever thought we would get.