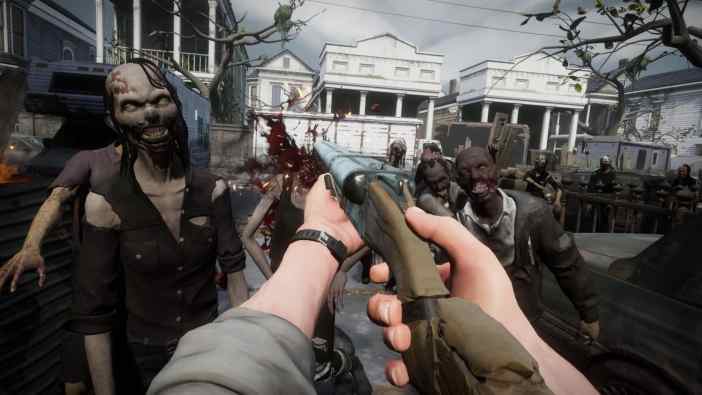 Skydance Interactive’s The Walking Dead: Saints & Sinners VR game is now available for purchase, and publisher Skybound Entertainment is celebrating its release with two new trailers. The game’s standard edition costs $39.99, while a $49.99 “Tourist Edition” is also available that comes with the soundtrack, in-game voodoo dolls, three weapon recipes, and a companion piece called The Supernatural Skeptic’s Guide to New Orleans. Beyond that, there’s a $149.99 “Tower Edition” that comes with a collector’s backpack that includes several physical items such as a camping lantern, concept art, and a 16 GB thumb drive.

It’s the first Walking Dead title to be exclusive to virtual reality headsets and launches today on Oculus Rift, Rift S, HTC Vive, HTC Cosmos, Valve Index, and Windows Mixed Reality. While available now on PC, the title is coming to Oculus Quest and PlayStation VR later this year as well with the PSVR release set for spring 2020. Set in the same universe as the popular zombie story, The Walking Dead: Saints & Sinners allows players to experience a horror-filled adventure set in New Orleans. As the new story trailer shows off, players will have to make moral choices as they deal with other survivors while also fighting and avoiding the undead.

The second trailer showcases The Walking Dead: Saints & Sinners‘ physical gameplay. Fully utilizing VR’s six degrees of freedom, players are able to swing melee weapons at zombies and will be tasked with crafting weapons. The game’s vertical scale is also shown as players are encouraged to scale buildings in order to attack enemies from above and get an advantage by using the element of surprise.

“With The Walking Dead: Saints & Sinners, we set out to create an experience that players and fans could fully immerse themselves in, which you can’t get from playing a console or mobile title,” said Skydance Interactive creative director Adam Grantham. “We wanted to give players an original story that truly belonged within The Walking Dead universe, from the environments, the narrative and the combat to make them feel as if they were truly living in this gruesome world.”