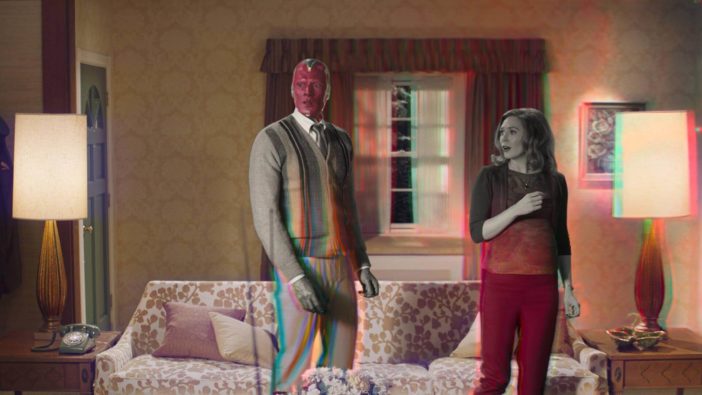 It’s almost time for everyone to get to figure out exactly what WandaVision is, but before that we can all be a bit more confused as the cast and crew have shared new details of the series with EW. The new series follows Elizabeth Olsen’s Wanda and Paul Bettany’s Vision, but in a setting that’s very different from anything we’ve seen before in the Marvel Cinematic Universe: the TV sitcom.

“The show is a love letter to the golden age of television. We’re paying tribute and honoring all of these incredible shows and people who came before us, [but] we’re also trying to blaze new territory,” said head writer Jac Schaeffer.

The premise of the series actually came from Marvel Studios President Kevin Feige, based on his love of watching Nick at Nite back in the day and tuning into MeTV before each workday. “I would get ready for the day and watch some old sitcom because I couldn’t take the news anymore,” he said. “Getting ready to go to set over the last few years, I kept thinking of how influential these programs were on our society and on myself, and how certainly I was using it as an escape from reality where things could be tied up in a nice bow in 30 minutes.”

Just how Wanda and the Vision are living in whatever world this is in WandaVision is unclear, especially because Vision died at the end of Avengers: Endgame. The two will find themselves happily married, and the series tracks them through the decades (or eras of television) as they steadily realize all might not be right.

What is clear is that Marvel is taking this throwback stuff deadly seriously. This isn’t some facade painted over the series. The first episode of the show used lighting and lenses from the era and went so far as using wire tricks like Bewitched and I Dream of Genie used when making bottles float or showing off other magic. It even filmed in front of a live studio audience.

This will be Marvel Studios’ first TV show to premiere, (The previous series were produced under Marvel Television.) though it was seemingly not intended to be so as The Falcon and the Winter Soldier was originally scheduled to land first.

It seems that the studio is taking a pretty cinematic approach to WandaVision, according to cast member Teyonah Parris. “I was like, ‘Oh, I thought we were doing a little show,’ but no, it’s six Marvel movies packed into what they’re presenting as a sitcom,” she said.

One thing is clear — these Disney+ shows are going to directly connect into the MCU, though Feige said that they’re trying to make them accessible to fans of all television: “If you haven’t seen any of them and just want to step into this weird thing because you love The Dick Van Dyke Show, it’s going to work. But if you’ve been tracking the 23 movies we’ve made and following along the stories into Phase 4, there’ll be a wealth of rewards waiting for you as it all unfolds.”