The crazy games release schedule continues inexorably, and October is nearly upon us. It’s time to examine the biggest launches of the month, and find out which games you don’t want to miss.

Steven Bogos says: Super Smash Bros. has managed to become the killer app for Nintendo systems. After all, while Zelda, Mario, Metroid and Fire Emblem fans may disagree on what the best game for any given Nintendo system is, they can all find something to like in Smash Bros. (even if it’s just beating on their least-favorite characters. I’m looking at you, Jigglypuff). The 3DS version is due out in October, and although it’s not the traditional home console version we’ve been waiting to buy a Wii U for, it should be enough to whet the appetites of the most ravenous fans. I’ve spent some time with the Japanese release, and while the controls do take some getting used to, it really does feel like a game built specifically for the system, rather than a watered-down Wii U port.
The best thing about the new Smash Bros. is that as well as having something for every kind of fandom, it also has something for every kind of player. Casual gamers will love all the new maps, new gamemodes, and customization options, while the hardcore Smashers finally have a balanced, fair, arena to test their mettle with the rest of the world in the game’s competitive online “for glory” mode. Then, of course, there are a whole bunch of new wild and wacky characters that are sure to put a smile on every player’s face.

Jim says: After the disaster that was Aliens: Colonial Marines, Sega knows it has to be extra careful with the marketing and release of Alien Isolation. So far, everything’s looking promising – a horror stealth game that uses Alien, as opposed to Aliens, as its inspiration is one way to do something new with Xenomorphs, and Creative Assembly is a proven developer that seems to be nailing the feel of the original Ridley Scott movie perfectly. I really hope Isolation makes the Xenomorph into a credible threat once more, something scary and intimidating, and I hope we get something that truly lives up to the film from which it takes its cues.

I’m a little leery on the reliance of having a Ripley in the mix, even if it’s Ellen’s daughter this time, and the relegation of genuinely interesting gameplay modes to downloadable content is sketchy, but I’m still really hopeful for something great. It’s a bold move, that’s for sure – few “AAA” games would get a chance to present a single-player horror game, where hiding is favored over combat almost entirely. Stretching that out to a full game is going to be a challenge, to say nothing of selling an audience on it, but if Creative Assembly pulls it off, this could be the start of something awesome. Here’s hoping! 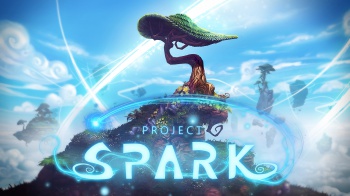 Schuyler says: When Project Spark was announced at E3 2013, it raised more than a few eyebrows at what they were suggesting; a blank slate for you to let your imagination loose. A world creator that you can, and will, share with your friends online, letting them get immersed in your world. Project Spark is the future; the game isn’t about winning or losing, it’s about being and building. Project Spark is a game focused on creation, you are given the tools to create worlds, you can create them in whatever form you wish. It’s not just about placing trees and flowers, it’s about the experience that you have while creating a game. You get to be the lead designer. You can create instances within your world that will interact with the player, which just makes the game even more fun by adding another level of immersion into this engine for creation. How would you create your world? There aren’t many limits, and you’re encouraged to shoot for the stars, something I’m sure that they’re going to add in DLC.

Josh says: I’ve played Borderlands and Borderlands 2 to completion and had zero regrets about the dozens, possibly hundreds of hours I’ve sunk into the franchise. The dark, quirky humor, the incredible loot mechanics, and the endless stream of Super Badass guys to murderize make for a thoroughly enjoyable experience. Honestly, I was having difficulty imagining how the series could be improved upon. Then, I played Borderlands the Pre-Sequel, and it was made very clear: super-low gravity makes virtually anything better.

Add to the lasers, frost weapons, and double jump the fact that Cl4p-Tr4p is actually a playable character with abilities like “High Five Guys” and some kind of crazy disco ball of destruction, and you’ll be hard pressed not to grin. It remains to be seen whether the narrative is up to par with BL2, where the series really came into its own story-wise, but the gameplay itself is more than enough to have me excited to get my hands on it.

The Evil Within
Developed by Tango Gameworks. Published by Bethesda Softworks. Releases October 14, 2014. Available on PC, PlayStation 3, PlayStation 4, Xbox 360 and Xbox One.

Paul says: I have a love-hate relationship with survival horror games. I love how weird and odd they are, and I hate playing them because they usually do a good job of freaking me out. So with the upcoming The Evil Within looking to be another survival horror games that’s going to put a really heavy emphasis on “horror” (have you seen that multi-armed bloody monstrosity in the trailers?!), it looks like I’m going to have to invest in a nightlight or two in order to get any sleep after playing it.
Directed by Shinji Mikami of Resident Evil 4 and God Hand fame, The Evil Within features Detective Sebastian Castellanos, who after investigating a mass murder, finds himself dragged into a hellish otherworld full of nightmares and other things that go “SKREEEEEEE” in the night. Using his wits and any weapons he can scavenge, Castellanos must try to survive and defeat whatever evil entity is pulling the strings, all while trying not to get brutally and horribly murdered by enemies like this friendly chap. Sounds like fun!

Janelle says: Fantasia: Music Evolved is the newest in musical rhythm games to hit the scene, developed by Harmonix. Utilizing the Kinect sensor, players will conduct their way through a wide-array of musical ensembles. From greatest and recent hits to Disney classics, players will swipe and dance to the beat, rewarded with changing elements to create their very own musical composition. Prefer an orchestral interlude in your favorite rock song? Here is where you get to make it happen.

Based on Disney’s animated classic Fantasia, get ready to step into Mickey’s signature shoes as the sorcerer Yen Sid (yes, that is Disney spelled backwards) takes on his newest apprentice, you. With the recent release of Disney Infinity: Marvel Super Heroes hitting it out of the park, keep your eyes on this latest Disney interactive experience, releasing on October 21st. 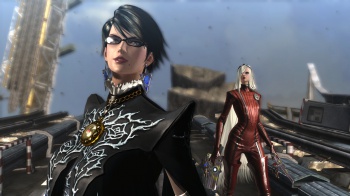 Paul says: I absolutely loved the frantic craziness that came with Bayonetta, and damn near gave myself carpal tunnel syndrome trying to pull off the ridiculous button-mashing combos. From its utterly bizarre angelic enemies, story and unique characters (especially its protagonist), I found it to be a weird, enjoyable game from start to finish. In Bayonetta 2, the titular character heads to Hell to rescue the soul of her friend Jeanne, battling demons and angels along the way. I had the chance to play a few demo levels during E3 this past year, and it definitely felt like it dialed up the sheer speed and combo attacks you could use to make for an even wilder brawler-style combat. I’m confident that the upcoming sequel is going to be just as crazy awesome as the first, and I’m definitely leaning towards buying a Wii U just to play it. Plus, it’s going to come with a version of the original Bayonetta with all kinds of Nintendo themed extras, which I have to say is also wicked cool.

Greg says: Do you like to take over the Earth in Civilization? Wouldn’t you like to take over another world? If you answered yes to both of those questions, then Civilization: Beyond Earth is something you should have on your radar for next month. The team behind Civ at Firaxis is busy putting the finishing touches on a turn-based sci-fi game in which you colonize a whole new randomly-generated planet. Where you take humanity is up to you – there are three philosophical affinities in Beyond Earth which provide special and unique bonuses. There’s also fantastical resources, dastardly alien life forms and hazards which are quite dangerous early on – steer clear of the green miasma or your units will perish. Beyond Earth isn’t quite Alpha Centauri, but it will likely keep me occupied for another 800 hours like Civ V has. 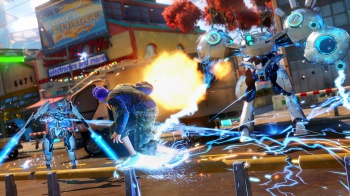 Josh says: I spent countless hours grinding and kickflipping in Tony Hawk in my early college days, so when I saw the traversal mechanics in Sunset Overdrive, I was immediately and nostalgically excited. It’s been made clear that Sunset Overdrive is not a game based in reality, so as you move around the world, you’ll be grinding power lines and bouncing off awnings, while keeping your enemies at bay. Add to that the wacky arsenal you’ll have at your disposal, and you’ve got the makings of a fun-above-all experience. From the vinyl record launcher to TNTeddy, which launches a stuffed animal strapped with dynamite at your enemies, realism doesn’t seem to have even crossed the minds of the designers, which is okay by me.