Shooter multiplayer modes live or die by two things: partners and options. The importance of having partners varies from game to game. Someone who’s really skilled at Call of Duty or Halo can run solo and still top the leaderboards but for co-op or objective modes having a team is pivotal. Options are more important across the board because they keep multiplayer fresh. Maps get stale. Game modes get mastered. Mixing different toolsets like classes, equipment and weapons gives players a way to challenge themselves;the successful way to play as an Assault class character is not how you play as a Sniper class character.

Unlocking options is usually tied to progression measured by experience points. If you get X number of experience points you unlock the next level, and with that level comes the ability to use some new weapons, or equip some new gear, or take advantage of new abilities. If a player sticks with the game they will eventually unlock everything, and achieving those goals provides another layer of challenge.

Mass Effect 3‘s multiplayer has stuck both the accrual of options and the challenge of using them behind a randomization system and an in-game purchase monetization model the likes of which is normally seen only in free-to-play games. And the more content BioWare and Electronic Arts release for ME3 multiplayer, the more these choices feel not only like a disincentive to bother with multiplayer anymore, but also like a petty method to try and make a few extra bucks that is getting in the way of an otherwise brilliant multiplayer mode.

It is factually correct to say the Rebellion Pack DLC introduced six new character classes, two new maps, three new weapons and a new game type for Mass Effect 3’s multiplayer mode. It might be more accurate to say the Rebellion Pack adds two new maps and a new game type for sure, and might add the rest of the new content if you get lucky rolls of the dice.

Mass Effect 3 multiplayer is basically Horde mode from Gears of War. In the default, baseline game mode up to four players have to survive ten waves of enemies and then hold an extraction point for two minutes until a shuttle arrives to pick them up. There are three levels of difficulty: Bronze, Silver and Gold. Gold matches are absolutely brutal.

Reinforcement Packs are akin to packs of Magic: The Gathering cards. You pay X number of credits for a Pack and get five random items. They can be single-use pieces of equipment, new weapon unlocks or weapon upgrades, experience points and character customization options for character classes, or unlocks for new character classes like the alien variants. The more expensive the variant of Reinforcement Pack, the greater your chances of getting Rare items. A Reinforcement Pack that costs 99,000 credits usually comes with two guaranteed Rare items, for example.

Credits are earned by completing objective-based waves during matches, and the higher the difficulty and the faster you achieve the objectives, the more money you earn. A Gold-level match usually takes about 20 minutes to complete and can net a player around 70,000 credits, so for every 40 minutes or so of multiplayer at its most punishing, difficult setting a player can afford a chance at getting two Rare items they’re looking for.

I cannot tell you how many times I’ve spent that 99,000 credits and received absolute garbage from the Pack I bought. Weapon powerups for weapon classes I don’t use. Equipment I really don’t need. Experience point bundles for character classes I’ve long since maxxed out at Level 20, which means those items literally go to waste. And once you get an item from a Reinforcement Pack you’re stuck with it. You can’t sell items back for credits and you can’t trade them with other players. 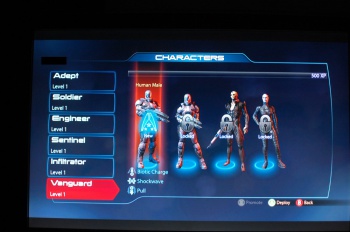 What I don’t get from my Reinforcement Packs with enough regularity are unlocks for the character classes I haven’t even tried yet after two months of playing the game, so when I see BioWare and Electronic Arts happily announcing that the Rebellion Pack DLC is adding even more character classes to the multiplayer it burns my ass a little bit, because I haven’t even gained access to all the defaults.

When I see the announcement about new guns I likewise feel miffed, because it’s not enough to just unlock a new weapon in Mass Effect 3 multiplayer. Each weapon begins at Model 1, and then you unlock upgrade items to upgrade one level at a time up to the Model Ten variant. I have one Model Ten assault rifle. It’s the goddamned rifle I began the multiplayer with by default, an Avenger-class AR. That’s the only assault rifle I can afford to use because I’m at the point where anything other than Silver- or Gold-level matches aren’t a challenge due to my characters being so high level and having all their powers maxxed out, and taking Model One or Model Two guns into Silver or Gold-level matches is like bringing spitballs.

When BioWare and EA release new content for ME3 multiplayer what they’re actually doing is taking your six-sided die and replacing it with a ten-sided die, and then a twelve-sided die, and eventually a twenty-sided die, and you roll dice with increasingly higher numbers of faces when you buy Reinforcement Packs and hope to come up with the gear that you need.

If you get tired of working your ass off to earn credits and purchase the Packs that way, you can spend Microsoft Points to purchase them outright, which probably explains why the Pack contents were randomized. I wouldn’t mind this if there were also an option to just purchase the content outright. I’m sure a ton of players would rather just pay $15 once to unlock the character classes and Model Ten weapons they want rather than gambling away their money in the vain hope of getting what they need. Gambling is precisely what it is, and the only reasonable explanation for how gambling wound up in a multiplayer shooter is that BioWare and Electronic Arts are trying to nickel-and-dime the players by feeding off their frustrations at not being able to unlock the gear the players need to keep the game interesting and fresh. I’ll bet the option to purchase gear outright will eventually land once Mass Effect 3 has waned in popularity and BioWare and EA need something to attract players back to the multiplayer mode.

I hate to say “BioWare and EA” because I have a sneaking suspicion this wasn’t BioWare’s idea. I doubt we’ll ever get the answer to that question as it doesn’t behoove BioWare to bite the hand that feeds them. I also hate to sound like I’m picking on EA especially after my last column because Electronic Arts has done well by us in the greater scheme of things, but when it comes to multiplayer modes in any game, options are the lifeblood of the mode. Trying new classes and experimenting with new abilities and weapons is a chief part of the fun. I consider exercising those options as a basic functionality for a multiplayer mode.

Locking that functionality behind a roll of the virtual dice when the player already shelled out $60 for the game, as though Mass Effect 3 was a free app on iOS which then offers in-app purchases to unlock the rest of the content, creates such a lesser experience for the player. It’s a damned shame because other than this one, horrible decision, Mass Effect 3 multiplayer is brilliant, and I’m sure players are going to put it down sooner rather than later owing to the Reinforcement Pack system. Being denied the new options you want to try because you’re not drawing the right card just isn’t fun.