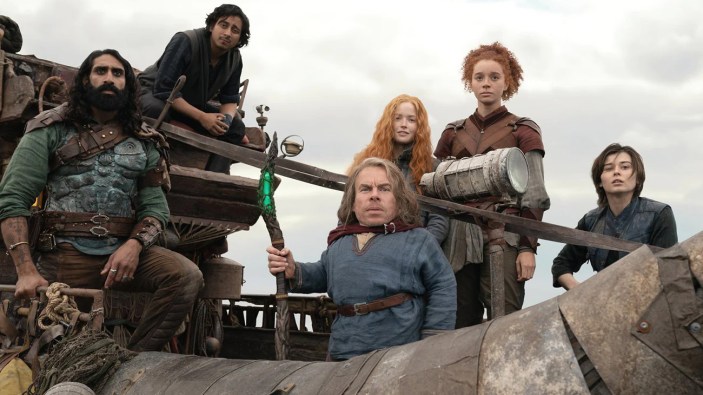 This discussion and review contains spoilers for Willow episode 8, “Children of the Wyrm,” the finale on Disney+.

Willow has been, in many ways, the statistical mean of the modern franchise streaming show. Indeed, it has arguably been a lot cleaner in its execution than the average Star Wars or Marvel streaming series, a purer distillation of the rhythms and structures of this new storytelling form. For better and for worse, Willow demonstrates the underlying formal mechanics of this emerging medium.

Watching Willow, it has generally been clear how the gears of the larger serialized narrative are turning. Installments like “Wildwood” and “Beyond the Shattered Sea” were less satisfying episodes of television than they were buttresses for a larger eight-part epic, narrative checklists of character beats and relationship dynamics that had to be established and articulated at a given stage in the season as a whole. This was often to the detriment of the episodes but necessary for the season.

As such, it feels both appropriate and inevitable that “Children of the Wyrm” plays out exactly as one might expect of the grand season finale of an eight-part brand extension of an existing intellectual property. It often feels like Willow has studied the playbook of other similar shows on Disney+, from WandaVision to The Book of Boba Fett, and distilled them down to their cleanest and purest form. If nothing else, “Children of the Wyrm” is an assured assemblage of familiar streaming finale tropes.

Some of these trappings are purely superficial. As with the finale of WandaVision, “Children of the Wyrm” boils down to characters throwing a variety of different-colored beams at one another. It’s bombastic. It’s loud. It’s ostensibly dramatic. It is clear to the audience at home that the special effects budget on the show was quite sizable. There is sound and there is fury. It’s smaller than the finale of a blockbuster theatrical release, but it still has its share of explosions and energy blasts.

There is something inherently toyetic in all of this, reflecting in the superficial trappings of a cool costume reveal. After all, fans got really excited to see Wanda Maximoff (Elizabeth Olsen) get a cool costume at the end of WandaVision, and the season finale of The Falcon and the Winter Soldier put Sam Wilson (Anthony Mackie) in his new Captain America outfit. So Kit (Ruby Cruz) gets to put on the Lux, which gets a big and showy computer-generated reveal, like she’s wearing an Iron Man costume.

There is a very pointed and very deliberate meaninglessness to all this, a shrewdly calculated outcome that is designed to avoid potentially upsetting any fans that may have any attachment of any sort to any significant character. Notably, no character of importance dies, because toys aren’t supposed to be broken or discarded. They are put back in the box, so everybody knows where they are and that they can be played with, whether anybody wants to play with them or not.

Sure, the Crone technically dies, but Lili (Rosabell Laurenti Sellers) was only introduced in “Beyond the Shattered Sea.” In order to create the illusion of stakes, “Children of the Wyrm” keeps setting up the idea of loss and sacrifice. In voiceover, Madmartigan (Jack Kilmer) even assures Kit that “love is sacrifice.” However, the finale ensures that none of those moments actually mean anything.

Boorman (Amar Chadha-Patel) has a nice moment where he realizes that Kit is the hero of the story, and so he places himself between her and the Gales to buy her some time. Graydon (Tony Revolori) gives everything that he has in an attack on the Crone, to protect Elora (Ellie Bamber). Kit accepts that she may have to kill her own brother Airk (Dempsey Bryk) to keep Elora safe and to save the world from the Crone. These are solid narrative stakes. 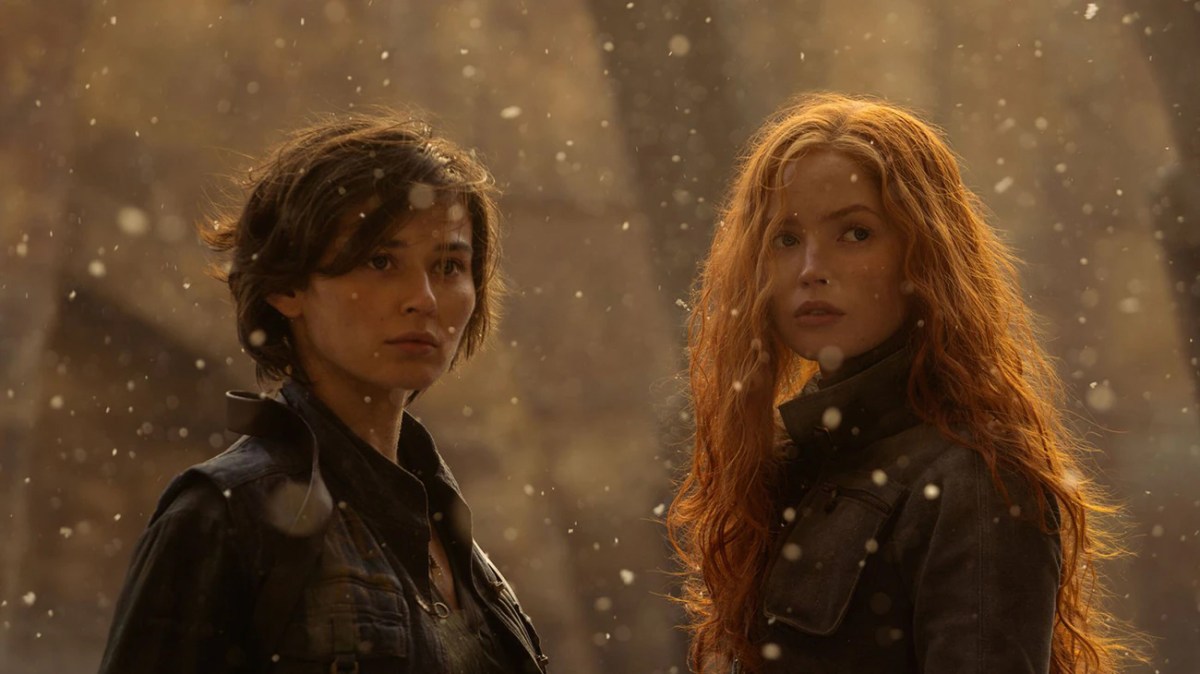 To be clear, not all of those characters need to die. The core narrative of the show perhaps dictates that Kit has to save Airk, for example. However, “Children of the Wyrm” effectively kills off all three of those major characters — and then refuses to let any of them stay dead. Boorman just walks out of the temple at the end of the episode. Graydon is resurrected to be tempted with dark visions. Airk is revived by the power of Kit’s love. None of this means anything because no sacrifice is honored.

This is just how these streaming shows work. WandaVision ended with the resurrection of the Vision (Paul Bettany). The Book of Boba Fett ended with the reveal that Cobb Vanth (Timothy Olyphant) wasn’t dead, but just sleeping in a bacta tank. Obi-Wan Kenobi couldn’t bring itself to kill off either the Grand Inquisitor (Rupert Friend) or Reva Sevander (Moses Ingram). Willow is just following the standard formula that drives these shows.

If nothing ever dies, that includes the show itself. Sequels and follow-ups have always been a reality of media production, but older films and shows generally had the good grace to at least wrap up their central story while leaving possible avenues to explore. In contrast, these modern exercises in intellectual property don’t even offer the illusion of closure or finality. Everything exists just to set up something else, rather than to serve its own purpose.

The second season of The Mandalorian leads directly into The Book of Boba Fett, which just turns into The Mandalorian for two episodes. Obi-Wan Kenobi ends with a tease of even more adventures for Obi-Wan Kenobi (Ewan McGregor) despite the fact that his arc is complete. WandaVision ends with a stinger that ties into Doctor Strange in the Multiverse of Madness. Carol Danvers (Brie Larson) shows up at the end of Ms. Marvel to entice Kamala Khan (Iman Vellani) to The Marvels. 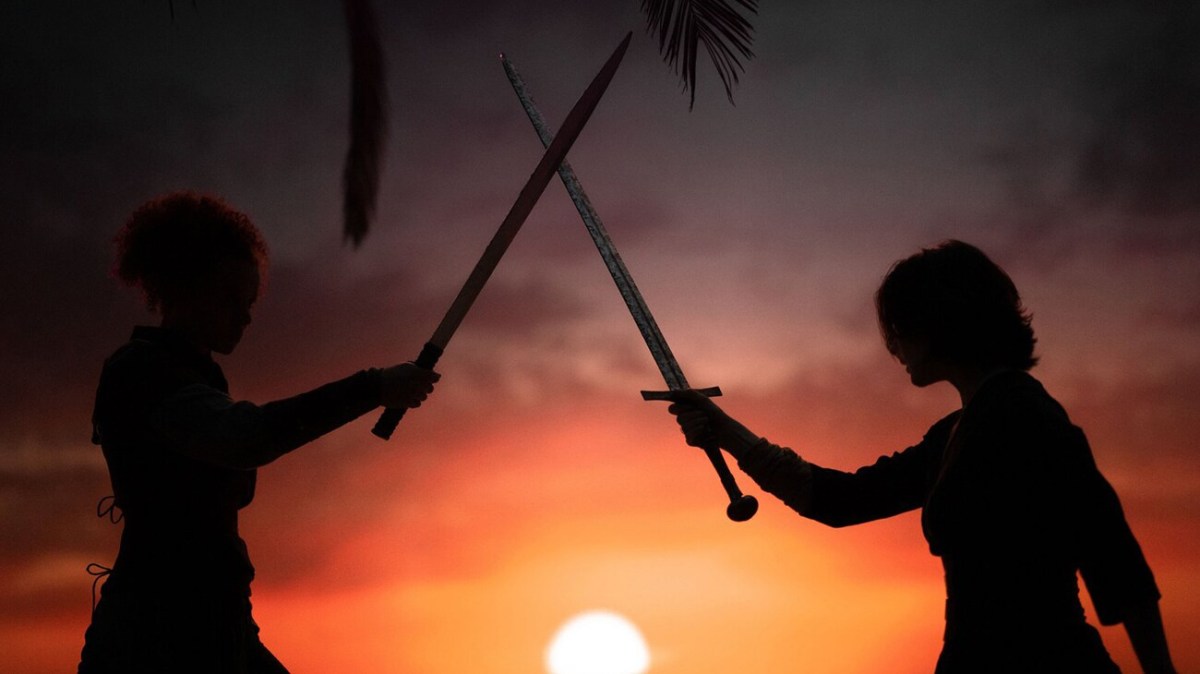 So “Children of the Wyrm” offers no illusion of finality to the story that it’s telling. “What is this?” Graydon asks, when confronted with a nightmarish image of Elora leading armies of darkness. “The end,” the vision states. “The beginning. The dawn of the next age of this world.” As Willow (Warwick Davis) leads his party on the journey home, he warns that the Wyrm is not finished with them. “Soon it will come for us,” he states. “Now we’ve really pissed it off.”

This isn’t teasing the further adventures of Willow and his friends. It’s insisting that this adventure never ends. There is no resolution. There is no closure. The story just continues on towards infinity, expanding like the wasteland around the Immemorial City or perhaps even the disorienting surroundings of the Shattered Sea. The only way one of these franchise stories ends is through cancellation, which brings its own frustrating lack of closure.

The result of all of this is that, in its own weird way, Willow is the perfect model of these modern franchise streaming shows. It is, to repeat, the purest distillation of the underlying mechanics and logic that drives them, often hitting the expected beats with a mathematical precision. Indeed, there’s an argument to be made that Willow does this better than most of Star Wars or Marvel shows on a purely technical level, simply because it understands the assignment. If nothing else, it’s efficient.

To give Willow some credit, the show has at least managed to maintain an internal thematic consistency that eludes many of its contemporaries. Willow understands what it is about and commits to that. At its core, reflecting its roots in 1980s pop culture, Willow is a story about the children of divorce, of kids trying to navigate a hostile world without the protection and shelter that their guardians should be offering. “Children of the Wyrm” follows through on that. 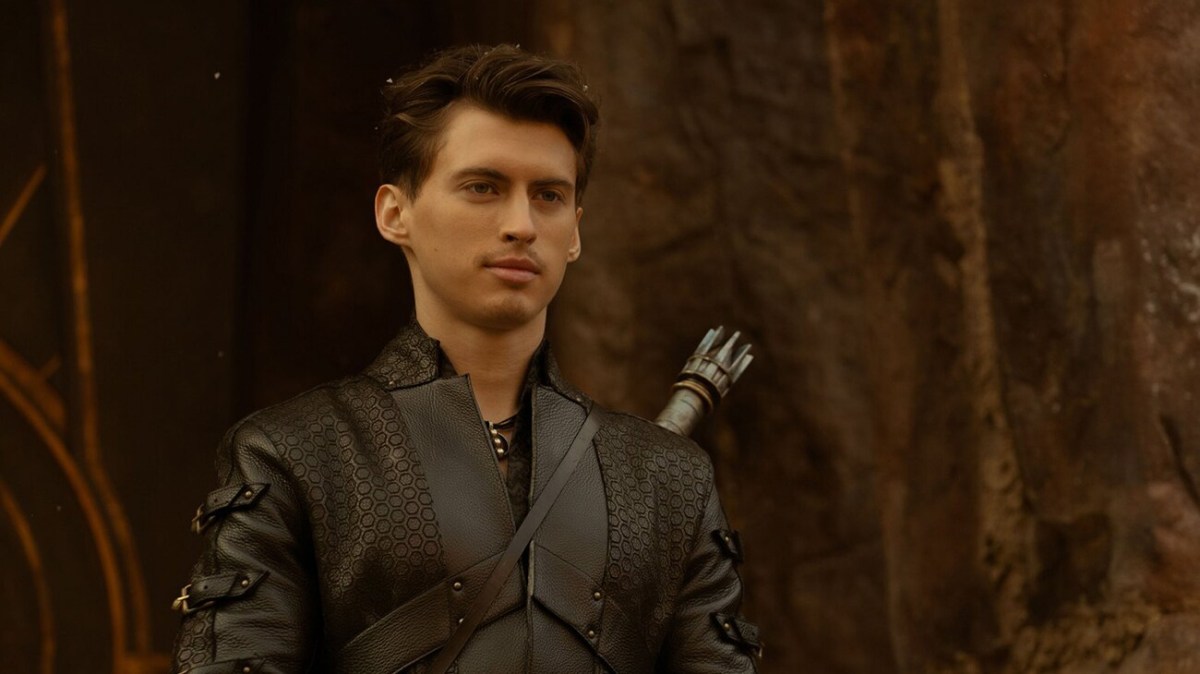 Much of Willow is built around the frustration that Kit and Airk feel towards their absent father, working through feelings of abandonment and disillusionment. “Children of the Wyrm” isn’t especially subtle. In the Immemorial City, Airk has fallen under the influence of the Crone. Given that his transformation is driven by consumption of a brightly colored fluid that is “like really bad for you,” one might even suggest that he has drunk the Kool-Aid.

Airk has been radicalized. It is perhaps pointed that the color of the liquid that he is consuming tends towards an orangey-red. When he greets Elora and Kit, he has changed. He has a new haircut and a cool leather costume that contrasts with his earlier relaxed persona. He may even have started to clean his room. He talks like a member of a cult. Complaining that Kit is “stubbornly committed to your own point of view,” he opines, “I’m not the one who needs help.”

The Crone tries to seduce Elora and Kit with the nostalgic fantasy of a perfect world. “You were always meant to forge your own path,” a vision of Sorsha (Joanne Whalley) tells Kit. “I knew it. And I was wrong to deny you your freedom. But it’s not too late to give it back to you.” The deal is simple: “The life you want, the life you were meant to have, is yours. And not in a dream, but for real, and from this moment on.” As Kit puts it simply, “Everything the way it was before?” 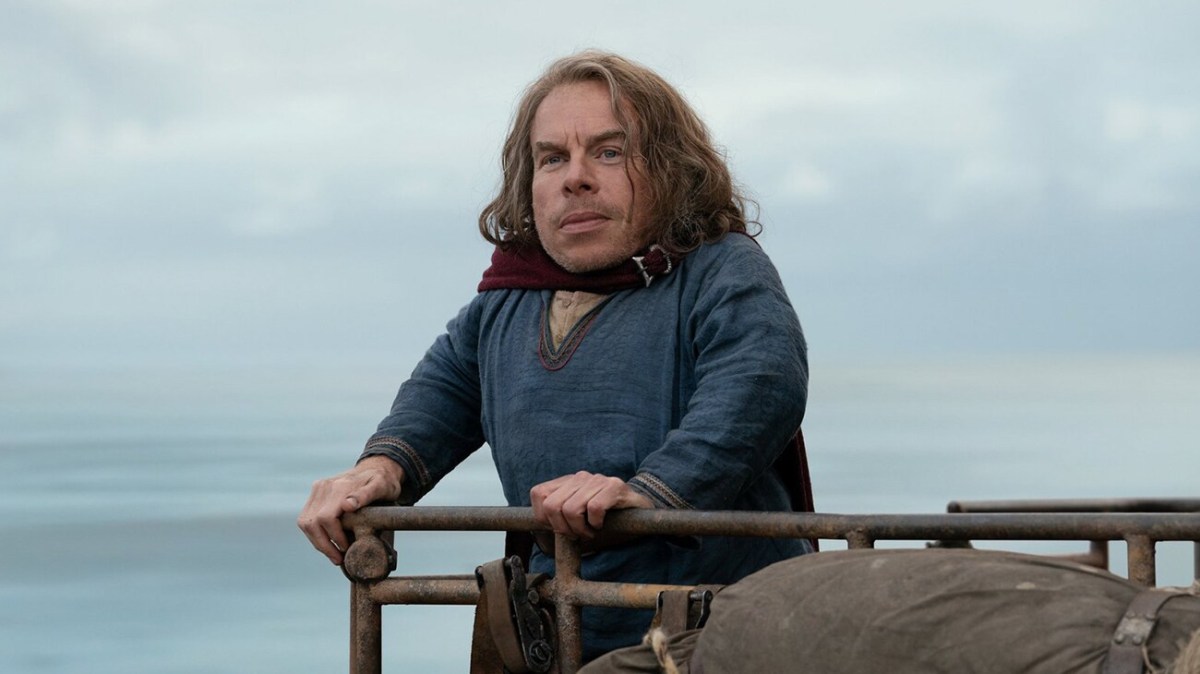 Airk makes a similar argument to Dove.  “What if we could go back to the last night in Tir Asleen?” he asks. “Before I left, before you met Willow and found out who you were, and before all those people died to protect you? Yeah, what if instead we got married and had a life together, and all you’d be giving up is something you never really wanted in the first place?” It’s the invocation of an idealized past that never really existed, but which is easier to accept than a complicated present.

Like a lot of young men, Airk has been seduced by a sense of “aggrieved entitlement,” the notion that he was promised a world that never materialized. “She showed me what I could be!” Airk tells Kit. Kit responds, “You’re my brother!” Airk counters, entitled, “I’m your king!” To the credit of the larger show, this is a clever follow-through on its central themes. Airk never really got over his father’s absence and so was easily seduced by a mythology that told him he deserved more.

“Children of the Wyrm” at least understands the emotional stakes of this conflict, even if it fumbles the larger scale of the threat posed by the Wyrm. The Wyrm’s armies seem to emerge out of nowhere, the timing conspicuously convenient for the season’s blockbuster climax. There’s a lot of rushed exposition about how the fate of the world comes down to this battle, which doesn’t feel properly set up, but which also seems obligatory in a streaming show like this.

In the end, Willow was more functional than fantastical, more mechanical than magical.