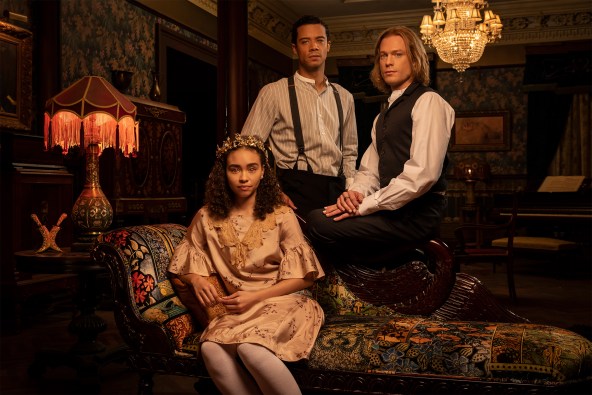 People often complain about remakes. “Why don’t they make anything new anymore? Why is everything a sequel, a spin-off, a remake?” There’s validity to this complaint, but original stories can be just as boring and derivative as any remake. I can’t say that we needed an Interview with the Vampire remake, but, well, I’m really happy it exists. I’m lucky if there’s a new show I really love once a year, a show that I not only want to binge, but also can’t wait to rewatch. I’m going to suggest that you, too, watch Interview with the Vampire as soon as you can. Maybe you’ll also love it enough for a hearty weekend binge-watch.

Jacob Anderson is Louis de Pointe du Lac, and Interview with the Vampire is his story. We first meet Louis in an incredible apartment in Dubai; he has reached out to the journalist Daniel Molloy (a hardened and weary Eric Bogosian) 45 years after they first met, to retell his story.

When Louis’ story begins, he is a 33-year-old queer Black man in New Orleans. Louis comes from money, from his grandfather’s sugar plantation. Having a hard time making money in the sugar industry, Louis turns to the red light district of Storyville, where he maintains a “diverse portfolio” of businesses. While he is friendly enough with the white businessmen and customers he deals with, they never let Louis forget that he is not like them. It’s here, in New Orleans in 1910, that Louis meets the vampire Lestat de Lioncourt (Sam Reid). 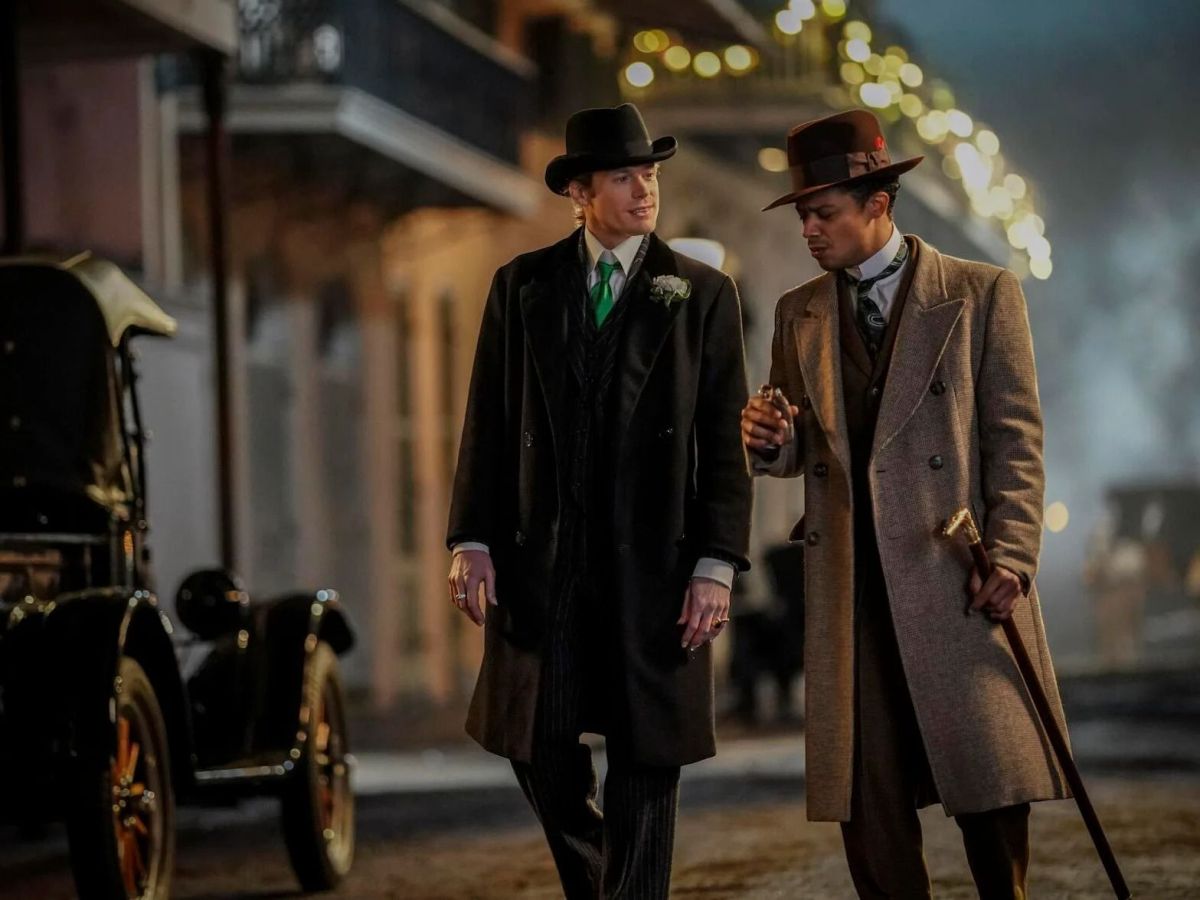 Vampire tales nearly always tell a story of codependency — of abusive, toxic, and seemingly inescapable relationships — and Interview with the Vampire is no different. Admittedly, I haven’t read or watched every piece of vampire lore that exists, but I have yet to see a depiction of vampires in which the fledgling vampire and their creator have a healthy relationship. It just doesn’t seem possible.

Louis and Lestat have a relationship built on manipulation and seduction. Lestat, needing to find a companion after over a century of loneliness, reads Louis’s mind and communicates telepathically with him, making him feel as if he is, for the first time in his life, really seen.

Their relationship, over the course of this seven-episode season, is deliriously toxic. Lestat pulls Louis away from his family and discourages him from staying in touch with his “human side.”  Louis, of course, resents Lestat for the ways in which he has been irreparably changed by the elder vampire. Louis decides the two vampires need to create their own family, and so we meet Claudia.

Kirsten Dunst’s 10-year-old Claudia in the 1994 rendition of the story is iconic, but Bailey Bass gives her a run for her money as the 14-year-old vampire child in this version. While her performance is sometimes histrionic, it’s believable. The hysterics of a 14-year-old girl are, at times, over the top, and it’s hard to even imagine how exacerbated the woes of a pubescent and hormonal mind would be when interrupted by vampirism. 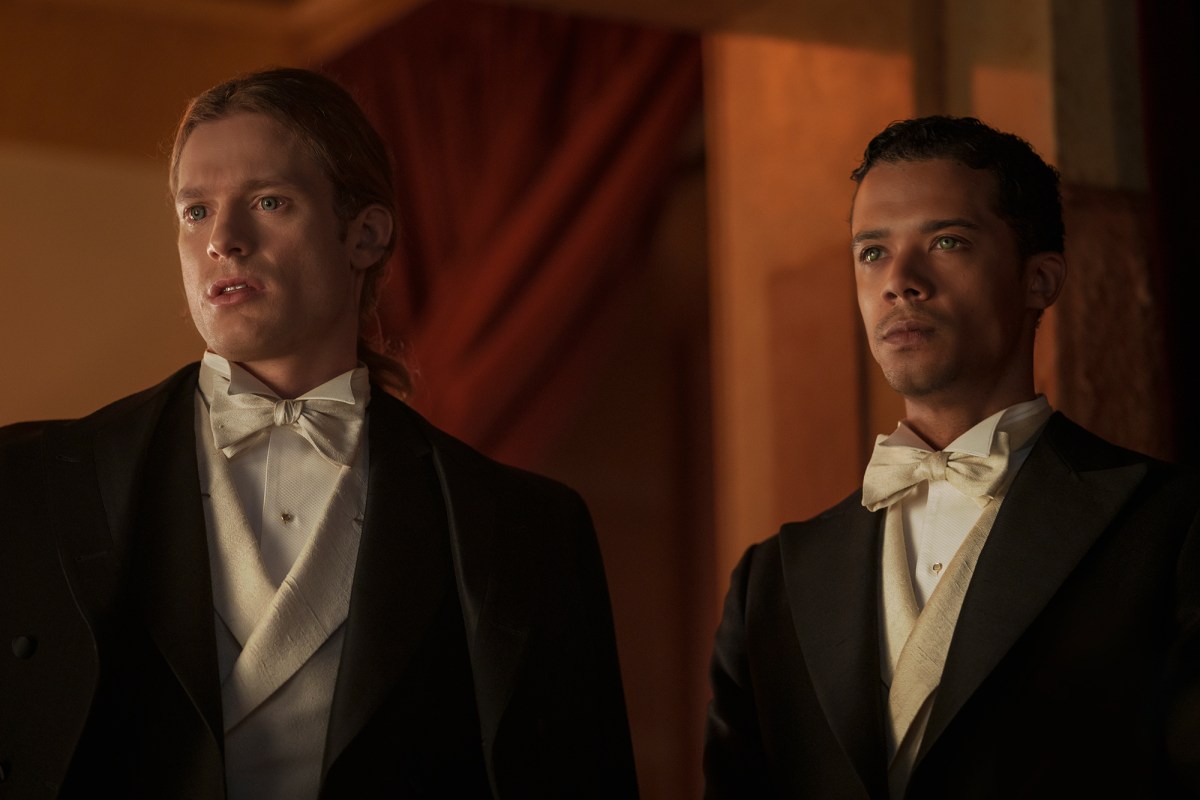 Louis, Lestat, and Claudia become a beautiful queer little family. This iteration of their relationship makes sense in this modern age where so many choose to live against heterosexual, traditional norms. What’s not beautiful, though, is the way that they hold each other hostage. Aging Claudia up to a teen for this series is a brilliant decision; the drama is ramped up, and the episodes that focus on her pull you into the feeling that this dynamic is inescapable for the three of them.

There’s also a clear power imbalance at play between Lestat and his two creations, Louis and Claudia; while this imbalance exists in any version of this tale, it’s underscored in this series by the fact that Lestat is a white man, and his two fledglings are Black. Interview with the Vampire does not shy away from showing us violence and manipulation. The story of Lestat and Louis is romantic (and overtly sexual), but it never lets us forget that it’s dangerous.

Vampirism is so often used as a metaphor for addiction, and the codependent tale woven into Interview with the Vampire fits right in with this theme. Jacob Anderson’s performance as a former human, struggling with his humanity, his bloodlust, and his grief, is somehow very relatable and genuine.

Interview with the Vampire is one of the best shows of 2022. It’s poetic. It’s pretty queer. It confronts difficult topics, from mortality to sexuality to racism directly, but with nuance. There is a little bit of flying, a bit of mind-reading and melodrama, a bit of burning in the sunlight, and yet this is the most grounded and human vampire story I’ve seen. You need to give it a watch this winter.