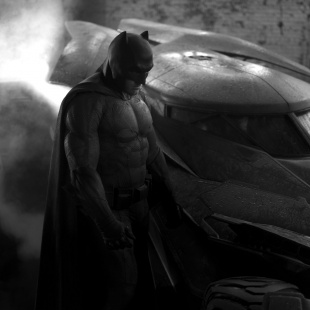 He also confirms how old Bruce Wayne will be this time out.

Are you among those who think Batfleck is a bad idea? You’re not alone: the news that Academy Award-winning director (and Razzie Award-winning actor) Ben Affleck had been cast as Bruce Wayne in Batman v. Superman: Dawn of Justice was met with a lot of mockery and a lot of ambivalence.

But is that fair? Sure, Affleck’s last turn as a superhero – 2003’s Daredevil – was a trainwreck, but it’s been a long time since the Bennifer days when Affleck was a public punchline, and it isn’t like this is the first time a Batman-associated actor was denied a good reception. Batman v. Superman executive producer Michael Uslan certainly thinks so. Speaking to App.com, Uslan reflected on his long history with Batman films (he’s exec-produced every film since Tim Burton’s Batman), and defended Ben Affleck against skeptics, comparing his reception to that previous actors in the franchise’s various incarnations have enjoyed.

After highlighting how there were skeptics of Burton’s decision to cast Michael Keaton as Bruce Wayne/Batman in the original film, Uslan went on to say “we’ve been through this I don’t know how many times already…. I remember even the ‘Iron Man’ (2008) guys got it on Robert Downey Jr. initially. Of course, we got it intensely when another genius, Chris Nolan, chose Heath Ledger to play the Joker (in 2008’s ‘The Dark Knight’). And it was a huge outcry: ‘How can a guy who just played a gay cowboy (in 2005’s ‘Brokeback Mountain’) play the Joker?’ You’re going to destroy the greatest villain ever, this is going to be a laugh. So, this has happened time and again, and it happened with Affleck.”

This isn’t entirely accurate, of course. Robert Downey, Jr. was widely celebrated when he was cast as Tony Stark (the concensus was, almost immediately, that it was perfect casting.) However, it’s definitely true that Michael Keaton, who up to Batman was known primarily as a comedic actor, and former teen idol Heath Ledger were controversial choices. And both of them made detractors eat much crow once the films were released. one can see the challenges of casting an actor like Ben Affleck as Batman. Given this perspective, might as well cut Ben the benefit of the doubt, no?

Meanwhile, Uslan also (mostly) revealed Bruce Wayne’s age in the film, and it seems that we all guessed incorrectly. Previous rumors had the Batman v. Superman‘s Dark Knight in his 50s, with a 30 year career as Batman under his belt. However, Uslan told App.com that “[t]o go back to the original thought of Bruce Wayne in his mid-40s, I think he’s going to be extraordinary.” Which means Bruce Wayne will be around the same age as the man playing him for a change. This at least makes Affleck believable in the role.

What are your thoughts on Uslan’s comments? What were your reactions when it was announced that Michael Keaton, Robert Downey Jr., or Heath Ledger were cast in their respective comic movie (but before you actually saw the films)? Did your opinions on those castings change after watching those films?

It’s Shark Week, Which Means Your TV Is Full of Sharky Goodness