Everything We Know About… is a column dedicated to giving you all the information you need for the biggest upcoming game releases. It will typically be published on the Friday prior to the featured game’s release.

Mass Effect: Andromeda will be upon us in just a few days, and if you’re like most of us, you’re probably wondering just what to expect. You may have seen a trailer, or read a preview, but you’re still trying to decide to plop down your money for the latest Bioware RPG. To help you along, here’s everything we know about Mass Effect: Andromeda. 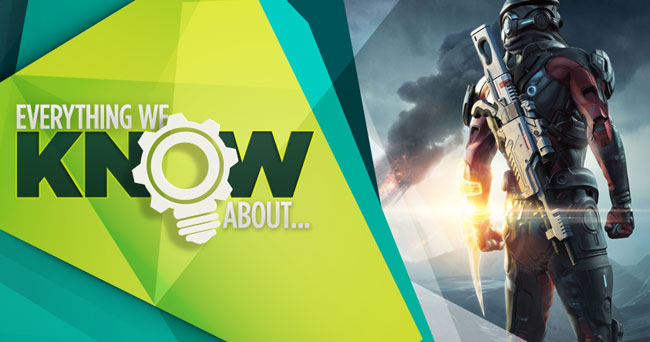 What is Mass Effect: Andromeda?

If you haven’t heard of the Mass Effect series, you have been under a rock for the least decade or so. The trilogy launched in 2007, and has encompassed three games thus far. After the turbulent reception received by Mass Effect 3, Bioware made the decision to take the franchise in a new direction with Andromeda.

Bioware began hinting at Andromeda around the launch of Mass Effect 3, but of course then everyone was referring to it as Mass Effect 4. In July of 2014, Bioware launched a survey about the new game, and Andromeda was revealed at E3 2015.

For some time after we knew that the game was titled Mass Effect: Andromeda there was little information available, but that started to change late last year. We learned that the main characters were brother and sister, and then Bioware showed off a new cinematic trailer for N7 Day. It was followed shortly thereafter by a gameplay trailer in December.

If you’re planning to play on PC, make sure your rig meets the system requirements, and get a look at all the PC-exclusive graphics options. If you’re playing on console, you should note that the PS4 version is running at 1080p / 30 fps, and the Xbox One version is 900p / 30 fps.

If you’re playing on PS4 and you don’t mind spoilers, you can check out the entire list of trophies right here