A great game, like a great book or a great movie, can transport us to a different time and place. When the writers and developers of a quality RPG or adventure title have done their jobs well, players can spend hours upon hours in another world, practically unaware of the passing of time. But for some gamers these other worlds have begun to seem like nothing more than variations on a theme: Yet another pseudo-medieval version of pseudo-England, yet another muddy WWII battlefield, yet another galaxy-spanning empire with shiny space ships and blue aliens. There’s nothing inherently wrong with these settings, of course. They’re wonderful for escapist adventures in which gamers can hit the ground running, without having to familiarize themselves with new cultures, environments, or character types. But many of the best titles in recent memory, such as Assassin’s Creed and BioShock, have been as compelling for their original settings as for their gameplay, and there are plenty of other new worlds for gamers to explore. One of the places developers might look to for ideas is fantasy and science fiction writing – after all, even non tie-in games have long drawn inspiration from writers such as Robert E. Howard and J.R.R. Tolkien. In this spirit, here are five proposals for top-shelf adventure and RPG titles set in rich but underused historical settings (and one future one), along with some reading suggestions for inspiration. 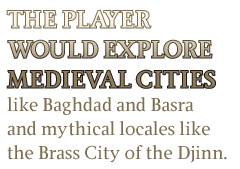 The Game: A Thousand and One Nights-inspired RPG set in the legendary era of Harun Al-Rashid. Players could choose from several classes, each with its own skills and powers – possibilities might include a swashbuckling “Street Thief” á la the Thief of Baghdad, “Sailor,” a warrior/explorer á la Sinbad, “Alchemist,” a master of arcane lore and potions, and “Djinn-Master,” a mage whose powers arise from his manipulation of various sorts of genies. The PC would explore bustling, adventure-filled medieval cities, like Baghdad and Basra, the mysteries of the monster-and-pirate infested high seas, and mythical locales, like the Brass City of the Djinn. The plots and adventures would culminate in a grand battle in the palace of the Caliph himself.

Further Reading: The Thousand and One Nights (as translated by Husain Haddawy); Desert of Souls by Howard Andrew Jones

The Aztec Empire at the Dawn of the Sixteenth Century

The Game: A bloody supernatural adventure title. The player would take on the role of an Aztec Jaguar Knight or Eagle Warrior embroiled in religious and governmental conspiracies involving human sacrifice, astrological prophecy, and serpent-gods. Gameplay would feature exploration of jungle levels filled with rival tribesmen and threatening animal spirits, as well as the temples, palaces, and seedy back-alleys of the teeming city-states of Tenochtitlan and Texcoco. The climax of the plot would offer the player a chance to rewrite history by fending off the seemingly all-powerful conquistadors and their mind- boggling technology like guns and horses.

Further Reading: Servant of the Underworld by Aliette de Bodard

The Game: A supernatural horror-tinged mystery game. The player would take on the role of an investigator of supernatural phenomena during the climax of the scientific revolution. Armed only with a musket and the tools of the new science, the investigator would pursue rumors of murderous house-ghosts in London, diabolical witches in the countryside, and dark spirits in the Scottish Highlands. Through interrogation of witnesses and analysis of evidence, the player would sort fact from fiction and occult evils from man-made mayhem, all the while trying to avoid being murdered by highwaymen and the haunting dead. 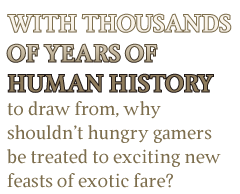 The Game: A crime-oriented sandbox adventure. Players would start the game as one of New York City’s innumerable street orphans, desperate to earn a crust of bread and a little respect. They would then choose one of several prominent immigrant or resident gangs to join, and rise through the ranks via murderous and larcenous missions. These illegal escapades would take them from “the Five Points” to Brooklyn and even across the river to spread their criminal empire to the villages of New Jersey. The main character would have to navigate alliance and treachery among the city’s growing ethnic enclaves and deal with corrupt politicians and vicious cops, ultimately extorting and murdering his way to the top of the underworld food chain. The player strives to become Old New York’s King of Crime.

Further Reading: The Gangs of New York by Herbert Asbury

The Game: A cyberpunk shooter/RPG hybrid. Players would step into the shoes and wetware of a nanotech-enhanced gun-toting industrial spy or company enforcer. A complex plot of corporate warfare, neo-terrorism, and government collapse unfolds against a backdrop of biotech innovation, proxy wars, resource scarcity, and corporate skullduggery. The player would shoot, sneak, and hack their way through a globe-trotting assortment of levels infused with local culture touches, ranging from Brazilian Jiu-Jitsu experts to deranged Bollywood-obsessed assassins. The gameplay would consist of beefing up weapons systems and biotech enhancements, as they piece together the conspiracy that will eventually turn them against their corporate masters.

These are, of course, only a few of the unexplored possibilities out there – there are plenty of others. When the gameplay is fun and fresh, the old comfort foods – paladins, spaceship captains, Nazi-slaying soldiers – can still be satisfying. But given that game designers have a whole globe and thousands of years of human history to draw from – to say nothing of wholly invented eras and environments – why shouldn’t hungry gamers also be treated to exciting new feasts of exotic fare?

Saladin Ahmed‘s fiction has been nominated for the Nebula and Campbell awards. His Arabian Nights-inspired fantasy novel “Throne of the Crescent Moon” is forthcoming from DAW books.