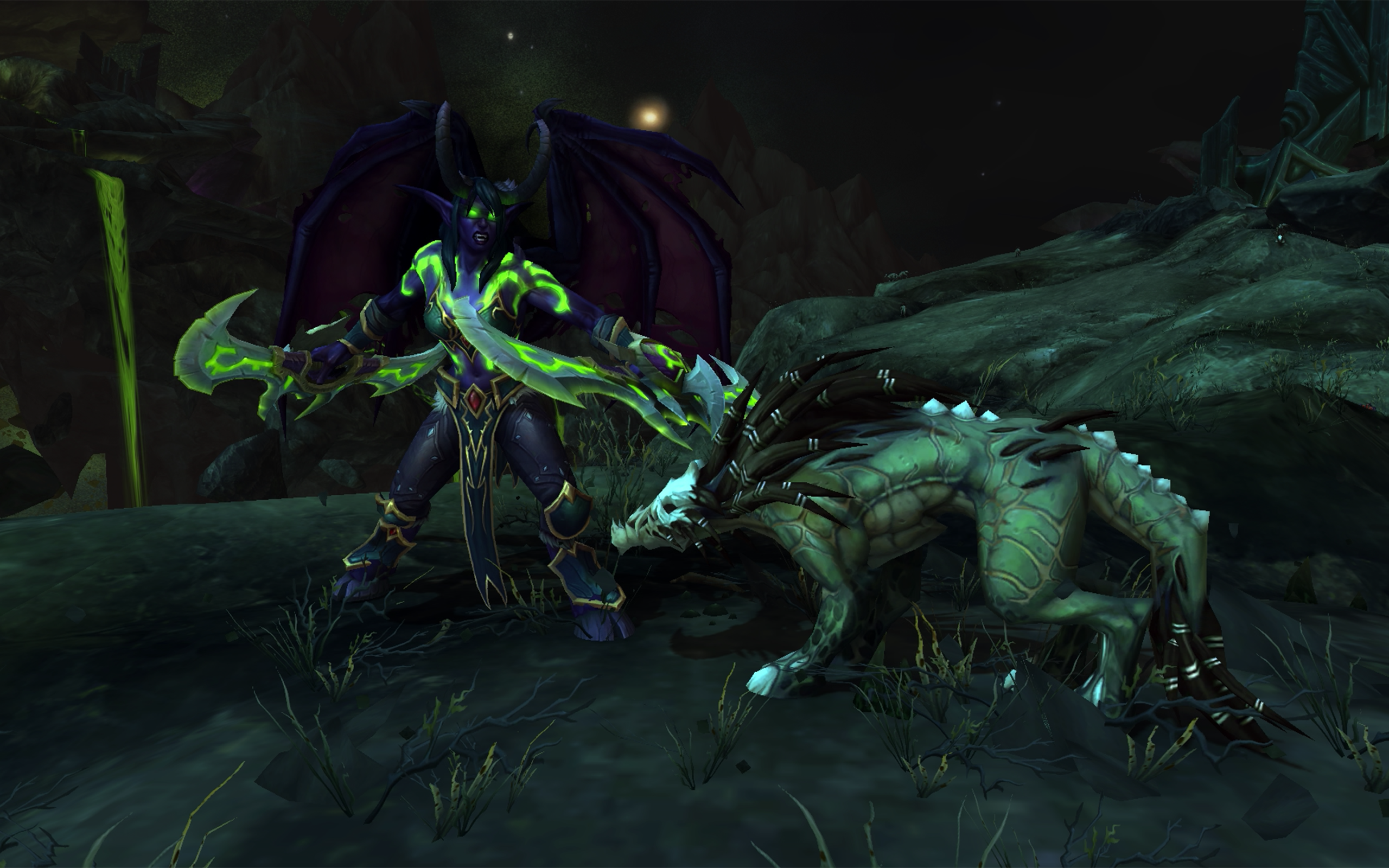 I look up to Illidan Stormrage. He is my mentor, my teacher. I chose to take the fel energies in my body as he did and follow the path of the demon hunter in our ongoing battle with the Burning Legion. Not everyone can survive the raging fire that burns within us. Not everyone is equipped to make the sacrifice that we must to defeat Azeroth’s deadliest foe. But we must or our world will die.

That’s what I told myself as I sat down to play the new demon hunter hero class for the upcoming World of Warcraft expansion Legion. As a Black Temple raider, we had thought of Illidan as an evil force that must be destroyed to save Outland from his influence. But now, we com to find out that he actually had a plan to thwart the Burning Legion, although he became a bit misguided in his efforts. Our efforts as raiders doomed all demon hunters to imprisonment at the hands of Warden Maiev Shadowsong, opening the door for this new expansion and the redemption of the class itself.

The Demon Hunter story opens with your character at level 98. Illidan has ripped open a portal to the prison world of Mardum in an effort to gain a keystone that will help bring down the Burning Legion. As one of his demon hunters, you learn your craft while taking down Legion demons. We got hands-on time with the class in the starting area of Mardum, which represents about the first half of the initial Demon Hunter experience. The second half, which takes place after Illidan’s fall at the Black Temple and hundreds of years in the future, won’t be playable until the beta starts in the next few weeks after BlizzCon ends. 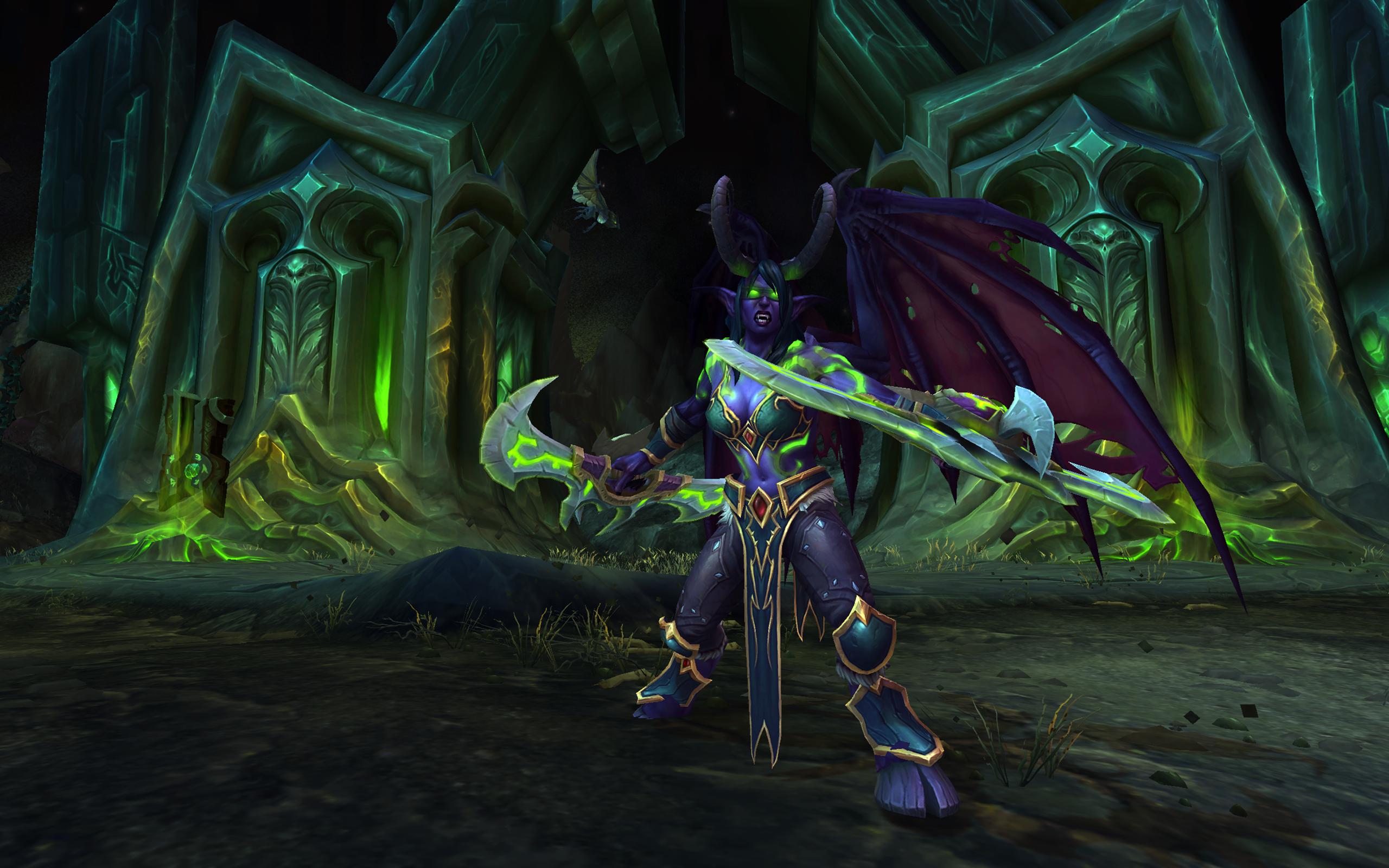 In Mardum, I begin with the task of killing demons, freeing captured demon hunters and destroying various constructs of the Legion in an effort to have a final showdown with the area’s final boss demon. Wielding the Demon Hunter’s familiar war glaives, the class starts with three basic combat abilities that usually make short work of the enemy. One ability is a short dash that does damage, but also can get you out of a sticky situation in much the way a Monk’s roll allows it to avoid trouble or escape. Where the class differs from others, though, is in its ability to gain new actions and attacks from killing certain demons or completing certain quests. One rather potent ability is a breath attack that hits all enemies in a cone in front of you, but it has a rather long cool down.

Another aspect that reminded me of a Monk was that killing a demon left a residual essence on the ground that the demon hunter could walk through to regain health, just like the Monk could pick up health globes after defeating enemies.

By the time I was close to finishing the Mardum area, I had picked up several new abilities and gotten to choose between the Havoc (DPS) or Vengeance (tank) specialization for the class. I had also picked up gear in most of my equipment slots in the 675 ilvl range.

Also in questing through the area, I was able to enlist the aid of Ashtongue warriors, Naga and Shivarra that will offer help against certain targets, including a few rather tough rare elites you may encounter.

The starting area has the feel of Shadowmoon Valley from Outland in the Burning Crusade, lots of lime green color and textures representing the fel nature of the environment. I faced some familiar demons, as well as some new character models that looked like they should hit like a truck, but are actually fairly easy to carve through.

By the time I had finished the area, I was halfway through level 99. The other half of the starting content should easily get you to level 100 before you start questing in the areas where non-Demon Hunters will start their expansion experience at level 100.

While this start to the new class was fairly brief, it seems to have the potential for some interesting gameplay. The tank specialization wasn’t implemented yet, but it was rewarded so close to the end of Mardum that I wouldn’t have had much of a chance to test it even if it was available. Granted this is yet another leather-wearing agility-based class, but the concept has some potential, enough that I will probably add a demon hunter to my stable of characters when the expansion hits sometime later next year. And given that the initial vision of the demon hunter was tainted by a wayward Illidan, it will be interesting to see how the class redeems itself when the Burning Legion comes to Azeroth once again.