In Fallout 3, we play the role of a character raised in an underground nuclear survival shelter called a “Vault.” The overarching storyline involves following our father out of Vault 101 into the Capital Wasteland that surrounds the ruins of Washington, D.C., to discover why he left. Our character finds a society clinging to existence in shantytowns, fighting against mutated monsters and scavenging for supplies. It’s a society that our character can choose to save, menace, or ignore.

Our character is equipped with a device called a Pip-Boy through which we manage our inventory items, read maps of the area and, among other things, listen to the radio. There’s a station named “Galaxy News Radio” run by a D.J. named Three Dog in the middle of the ruined capital. As our character travels the Wasteland, Three Dog breaks into the 1950’s-era music programming to tell the audience about the good (or evil) deeds of our character, who he refers to as “Vault 101.”

My character in Fallout 3 is named Aeryn, but after listening to Three Dog prattle on with these news reports for a while I began referring to my character as Vault Girl, and the appellation stuck. Vault Girl started to come alive for me shortly thereafter, in the same way a character might come alive for an author of fiction. Maybe it was because I’d found her true name, but soon I was wondering “What would Vault Girl do?” when faced with decisions.

When I was a screenwriting student in college, I was taught that if we knew our characters well enough, they would speak to us. When we wrote the stories for our screenplays, we would know how our characters would handle the challenges we threw at them. We would create characters that felt real by knowing them intimately. Vault Girl taught me what my screenwriting professors had tried and failed to. The longer I played Fallout 3 the better I knew what Vault Girl would do, and those decisions reinforced who Vault Girl was.

She gave water to the needy, fresh water being one of the rarest and most precious of substances in the Capital Wasteland. She tried to help a town deal with a pack of raiders who were killing the town’s cattle. She discovered that the raiders thought they were vampires, and were killing the cattle for the blood, which they believed to be their only sustenance. Vault Girl chose to offer them a deal wherein she would give the raiders blood packs in exchange for them leaving the town alone.

When Vault Girl discovered a community of survivors who had escaped from the clutches of the giant, green, man-eating Super Mutants who wandered the Wastes, whether or not she would help them fend off the next attack of their former captors wasn’t even a choice. I knew by that point that Vault Girl considered life sacred. When Vault Girl discovered the center of the Capital Wasteland’s human trafficking trade set up in an old strip mall, of course she refused the offer to sign up with them for profit. I knew Vault Girl also had no choice but to free the slaves they held in captivity, even if it meant killing every slaver to the last man. To make sure the deaths had been worth it, Vault Girl escorted some of the freed slaves all the way home.

I got into the habit of saving Vault Girl’s game only when she was sitting in the living room of her house in the city of Megaton, to always make sure she was safe, because like the best characters in fiction Vault Girl lived on even when I wasn’t “reading her story.” She came to life because Fallout 3 was a world that changed based on her actions. Playing a role means drawing on aspects of who we are, and as a kid raised Catholic I was taught to sacrifice on the behalf of others. I stopped practicing that faith when I was sixteen but I still believe in helping people when I can. The little differences I make in the real world are important, but they’re still little differences. Vault Girl made huge differences. She is the embodiment of all that is best in me, and what I aspire to be. 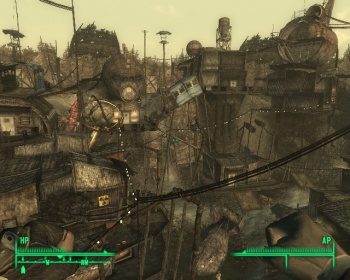 She’s sitting in that living room waiting for me right now, but I don’t dare visit her. Choices not only bring characters to life in role-playing games but also keep them alive, and after one hundred and fifty seven hours of wandering the Capital Wasteland together, Vault Girl and I have almost run out of things to do. She’s explored almost every location on the map. She’s finished almost every quest. If choices and adventure are what keep Vault Girl alive, what happens to her when they’re all gone?

Fallout 3 used to have a definitive ending. Your character made a choice to sacrifice themselves, or force another character to take your place, in order to complete the work your father had fled Vault 101 for: To provide clean water for every man, woman and child in the Capital Wasteland. When presented with this choice, Vault Girl stepped up and did the right thing, of course.

I hadn’t visited nearly half the locations on the map at that point, and had more unfinished quests than completed ones. I couldn’t believe the game would really kill Vault Girl and end with all that content left over, so when the game cut to the closing credits I was incensed. So were a lot of other Fallout 3 players who felt robbed of all that content they hadn’t finished. Imagine how angry a player who hadn’t chosen to sacrifice their character would have been when the game ended anyway?

Seven months after Fallout 3 was released, Bethesda Softworks released a downloadable content pack called Broken Steel, which enabled players to continue past the original ending of the game. I was ecstatic the day I bought Broken Steel on Xbox Live because it meant being able to adventure with Vault Girl again! More downloadable content like The Pitt and Point Lookout kept the game going even longer, but eventually I arrived at the point where Vault Girl stands today, with that mostly-filled-in map and short list of unfinished quests.

One of the basic rules of fiction is that stories need endings. Characters can then live on in the imaginations of the audience. Vault Girl’s story never ends. Even when all the content that makes her world feel alive is gone, Vault Girl will sit in that living room waiting for me, forever. And if I dare pay her another visit past the point of the content being used up, it will only be a matter of time before whatever life I breathed into Vault Girl is also gone. There will be nothing left to do other than wander the Capital Wasteland killing the same creatures and going to see the same merchants who’ll say the same things when I buy more ammunition to go kill more creatures until I need more ammunition. Vault Girl will be reduced to a shuffling zombie motivated purely by instinct.

Vault Girl won’t be able to live on in my imagination unless she’s truly dead, and the only way to make that happen will be to pull the plug on her, reducing Vault Girl to just a few kilobytes of data to delete from my Xbox 360’s hard drive. That’s not how I want to remember the end of my adventures with the video game character who has come to life more than any before, or any since. When Fallout 3 had a definitive ending I was furious because I wanted more time with Vault Girl. Now that I have all the time in the world with her, I think being left wanting more was the better choice.