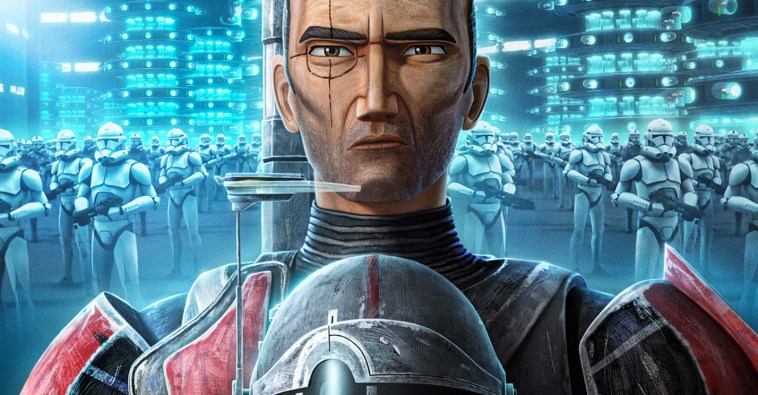 There is something quite compelling baked into the premise of Star Wars: The Bad Batch, particularly in the context of the larger Star Wars franchise. Notably, the show is fascinated by the question of what makes a hero, using its central cast of clones to argue that it is more than just a matter of genetics.

The larger Star Wars franchise is obsessed with notions of hereditary power and dynastic destiny. The nine films that make up the spine of the shared universe are collectively known as “the Skywalker Saga,” with the three trilogies charting the course of a single bloodline across generations. The prequels focus on Anakin Skywalker (Hayden Christensen). The original trilogy is driven by his son Luke (Mark Hamill). The sequel trilogy is built around Anakin’s grandson, Ben (Adam Driver).

In these films, there can be a strong sense that everything in the Star Wars universe revolves around a very select group of people. The Last Jedi tried to get away from this, arguing that Rey (Daisy Ridley) was an outsider with no genetic ties to any previously established characters. However, The Rise of Skywalker pushed back against this, structuring itself around the revelation that Rey was secretly the granddaughter of Anakin’s corrupt mentor, Emperor Palpatine (Ian McDiarmid).

This is a very conventional way of structuring a mythic saga, a story of families caught in a struggle that stretches across generations with dramatic consequences for the entire cosmos. There’s nothing necessarily wrong with this approach. There is a solid argument to be made that Star Wars is fundamentally a story about parents and children, about generations pushing forward and building on the failures of their forebears in the hopes of making a better world. 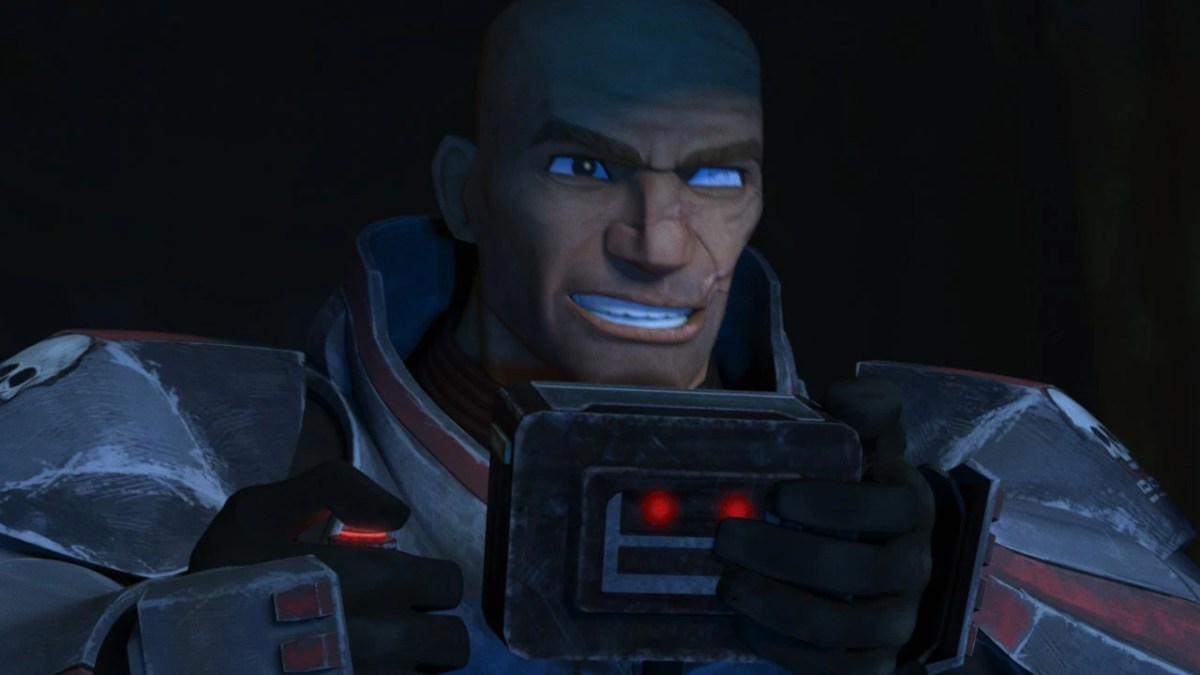 However, this isn’t all that Star Wars is. The beauty of the franchise is that it has many facets and that it can be examined from any number of angles. It is a grand and mythic epic about parents and children, but it is also a story rooted in specific cultural markers like the Vietnam War. Much of the best recent Star Wars storytelling has been developing that side of the franchise, exploring what it means to extend George Lucas’ epic about resistance against tyranny to the modern world.

This is part of what makes The Bad Batch so conceptually compelling. The show is a spinoff from Star Wars: The Clone Wars, and the title characters were even introduced during a three-episode arc in that show’s final season. The Clone Wars is a highlight of the Star Wars canon, in large part because it realizes a lot of the latent potential in George Lucas’ somewhat uneven prequel trilogy. Part of that show’s beauty is its anthology format, being able to jump across the cosmos and timeline.

However, by its nature, The Clone Wars tended to gravitate towards established characters, albeit recast using different actors. The series tended to focus on familiar and iconic Star Wars heroes and villains like Anakin Skywalker (Matt Lanter), Obi-Wan Kenobi (James Arnold Taylor), Yoda (Tom Kane), Count Dooku (Corey Burton), Darth Maul (Sam Witwer), and Mace Windu (Terrence C. Carson). They weren’t in every arc, but they were in enough to dominate the show.

Ironically, despite eschewing the anthology format that made The Clone Wars so interesting, The Bad Batch has a much more democratic view of the Star Wars universe. The show is built around a team of rogue clone troopers, formerly known as Clone Force 99. Like the rest of the army introduced in Attack of the Clones, the squad members were cloned on Kamino from bounty hunter Jango Fett (Temuera Morrison). At a base level, they are no different from any other clone troopers.

According to Dave Filoni, the idea of The Bad Batch came from George Lucas. “He wanted to explore this idea that there were clones that were a little bit more unique from one another that were like a special forces unit that had enhanced skills,” he explained. “And so the trick for those characters is really making them feel special in what their abilities could be, but not making them superheroes.” The show’s eponymous squad members are physically distinct but built from the same basic template.

The premise feels like an escalation of something that simmered through The Clone Wars. Throughout that series, the writers and animators would work hard to distinguish clones from one another, often through tattoos and hair styles. It helps that every clone trooper is voiced by actor Dee Bradley Baker, who imbues each with just a trace of individuality. There is a recurring sense in The Clone Wars that many of these functionally identical soldiers see themselves as distinct people.

Over the course of The Clone Wars, fans came to attach themselves to and identify with particular clone troopers like Rex or Cody, who developed distinct personalities and identities. The Bad Batch pushes this idea to its logical extreme, featuring a central team that is a riff on classic episodic television like The A-Team or Mission: Impossible, but where every member of the team is just a slightly different copy of the same person.

However, the Bad Batch themselves may be the worst example of this central theme of individuality within an otherwise uniform template. Most obviously, they look physically distinct from one another and from other clones, so they stand apart; Wrecker has a very different body type than Crosshair, for example. They also exist outside of the structures of the emerging first Galactic Empire, and so they are the heroes of the narrative in a very literal sense.

This is what makes the third episode of the second season, “The Solitary Clone,” so compelling. After its two-episode premiere, The Bad Batch takes a break from its wandering renegades to focus on Crosshair. Crosshair was a member of the team who betrayed them and who opted to remain with the Empire. As such, he offers a grounded perspective on the transition from the Galactic Republic to the Galactic Empire — an inside view of a democracy sinking rapidly into fascist tyranny.

In “The Solitary Clone,” Crosshair is assigned a special mission alongside Cody. On the separatist planet Desix, Tawni Ames (Tasia Valenza) has rejected Imperial authority. She has taken Imperial Governor Grotton (Max Mittelman) hostage. Cody and Crosshair are tasked with rescuing Grotton. During the climactic standoff, Cody finds himself moved by Ames’ appeals for Desix’s independence. Crosshair doesn’t share Cody’s sympathy and casually executes her the first chance he gets.

It’s a wonderful piece of drama, because Cody and Crosshair are nominally the same person. They are both soldiers of the Empire, grown in the same laboratories from the same DNA samples. They have lived different lives but have both killed in service of what they believe to be higher ideals. So why does Cody have that emotional reaction, but Crosshair doesn’t? They share the same starting point and end up in the same place, but they are fundamentally and irreconcilably different.

There is a tendency in these franchises to focus on heroism as something rooted in identity. Heroes are those characters that the audience recognizes. This is particularly true in this nostalgic age, where the major franchises are constantly bringing back familiar faces. Even within the Star Wars universe, shows like The Book of Boba Fett and Obi-Wan Kenobi are built on the return of heroes that the audience already knows and loves. These are good people, so of course they do good things. 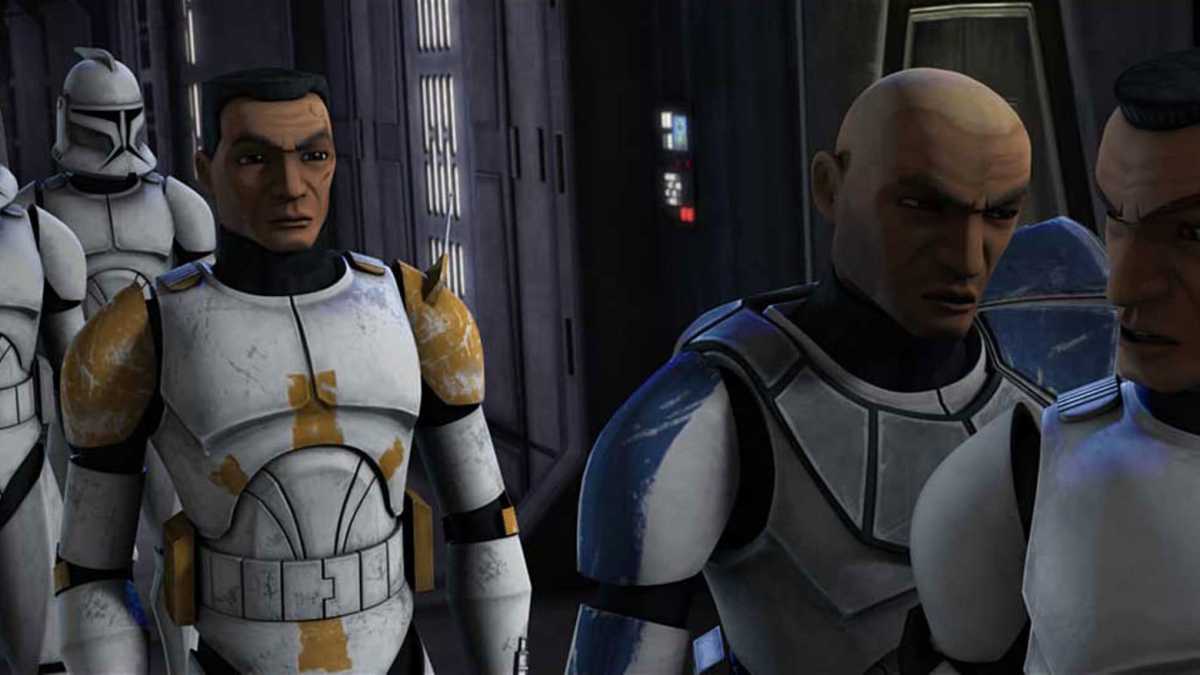 This is the beauty of The Bad Batch, as articulated in “The Solitary Clone.” In some ways, it is an extension of the themes of the most interesting of Disney’s Star Wars output, movies like Rogue One and The Last Jedi or shows like Andor. It is built on the understanding that heroism is a choice, not a genetic profile. At a time of social and political unrest, every person has to make a decision between right and wrong. That choice is less about who they are and more about who they can be.

This is the central premise of The Bad Batch as a television show. In many ways, the show is a companion piece to something like Brad Bird’s The Iron Giant, a movie that asks the question, “What if a gun had a soul and didn’t want to be a gun?” This is a show about a team of trained killers who decide that they don’t want to do that any longer. However, part of the issue with the lead characters is that they’ve already made the choice. It’s more compelling to watch characters like Cody and Crosshair grapple with it. It gives them a dramatic arc.

Upon returning to Coruscant, standing outside a giant memorial that is rather conspicuously modeled on the Vietnam memorial in Washington, D.C., Cody ponders his situation. “Tell me something, Crosshair,” he asks. “This new Empire. Are we making the galaxy better?” Crosshair responds simply by reaffirming his origins, “We’re soldiers — we do what needs to be done.” For Crosshair, his fate is coded in his DNA. Cody isn’t convinced.

“You know what makes us different from battle droids?” Cody counters. “We make our own decisions, our own choices. And we have to live with them too.” Cody doesn’t show up for duty the next day. He makes his choice. He goes rogue. In doing so, he rejects the identity imprinted on him through his genes. In some ways, that is as pure an act of heroism as imaginable in the larger Star Wars franchise: an ordinary clone trooper choosing to be more than his genetic profile.

It’s great to have the Skywalkers fighting a mythic battle for the fate of the cosmos, but one gets the sense that Cody offers a more attainable model of heroism. Cody makes the choice to reject fascism not because of his own blood ties to the larger struggle, but because being an individual comes with the moral responsibility to make the choice to do the right thing.