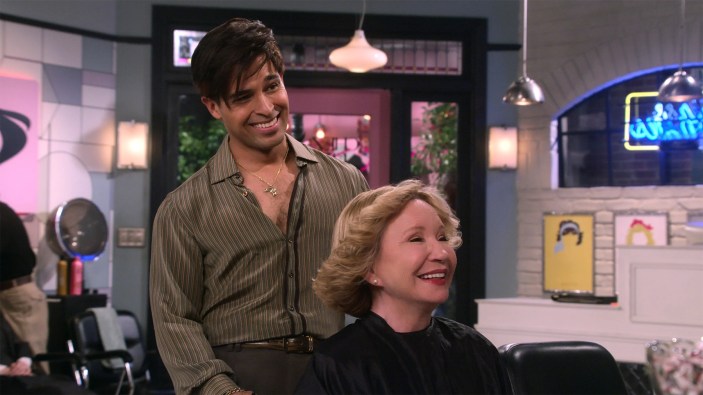 There is something innately charming about the warm nostalgia of That ’90s Show, the legacyquel to ’90s sitcom That ’70s Show.

Part of this is largely down to the revival of the classic sitcom format. The sitcom has long been a staple of American popular culture. There is a reason that WandaVision used the genre to chart its potted history of the medium. However, after spending decades in a sturdy and reliable form that typified everything from I Love Lucy to Cheers to Friends, the genre underwent a subtle shift at the turn of the millennium.

Shows like Malcolm in the Middle, Scrubs, The Office, 30 Rock, and Curb Your Enthusiasm eschewed many of the markers of the form. They ditched the laugh track. They stopped recording in front of live studio audiences. They switched to more naturalistic production design, performances, and location work. They rejected the multi-camera setup in favor of a single-camera aesthetic. They even rejected video tape and began to look more like films.

To be clear, there are still examples of the old-fashioned sitcom on the air, such as Last Man Standing. However, these often feel like conscious and deliberate throwbacks. In 2021, ABC made a big deal of Live in Front of a Studio Audience, a live recording of two classic episodes of late ’70s sitcoms Diff’rent Strokes and The Facts of Life. There is a sense in which the old-fashioned sitcom is a source of nostalgia rather than a living and breathing art form in its own right.

Undoubtedly motivated by the success of classic sitcoms like The Office for Peacock and Friends for HBO Max, Netflix has been chasing its own comfort food sitcom to fill the gaps left by studios removing their back catalogs from the service. Netflix has tried to create its own modern sitcom with Space Force, which even stars Steve Carrell from The Office. However, it also tried to tap into older styles of sitcoms with canceled shows like Dad Stop Embarrassing Me or Mr. Iglesias. In fact, That ’90s Show isn’t even Netflix’s first attempt at reviving an existing sitcom, following on from Fuller House and One Day at a Time. 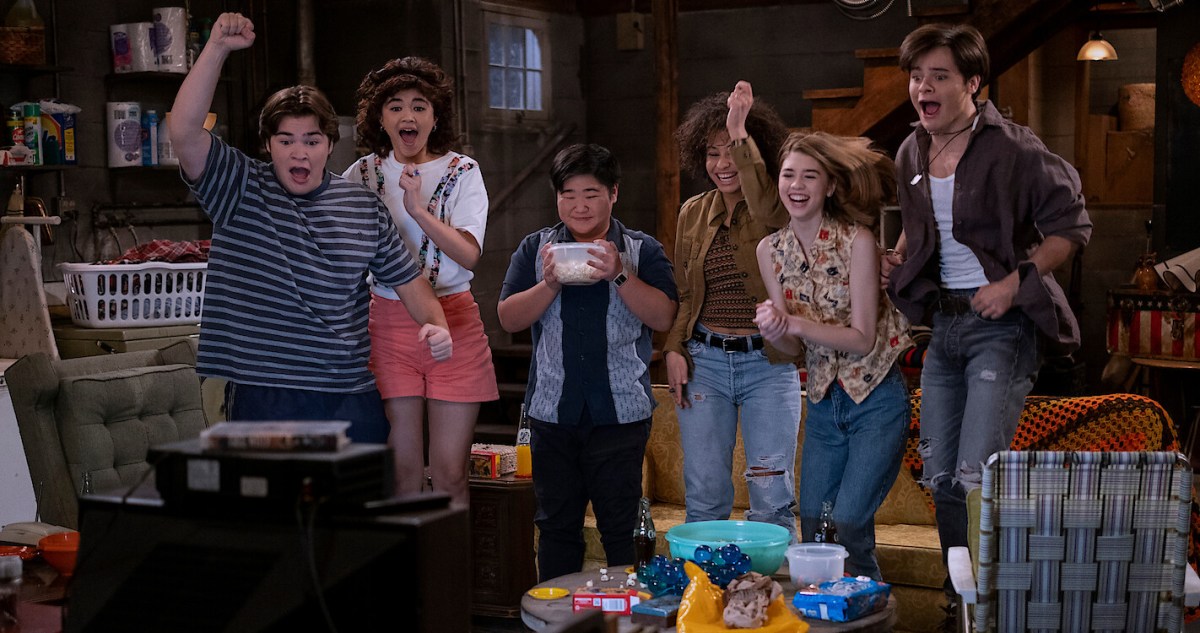 The sitcom is a unique art form, particularly in that classic multi-camera setup. It’s something of a hybrid between theater and film, connecting back to the medium’s early days of live dramatic broadcast. Actors have to give larger performances because they have to be visible to the cameras in fixed positions. They also have to deliver their lines in ways that factor the audience’s response, whether pausing for a laugh or letting a shocked gasp pass. It’s a different kind of television.

That ’90s Show is an affectionate nostalgia blast for that somewhat outdated mode of production. It’s a very faithful reproduction. The show is created by Bonnie and Terry Turner, who have a long history with this sort of television comedy. They worked as staff writers on Saturday Night Live before creating both That ’70s Show and 3rd Rock from the Sun. The show is mostly directed by Gail Mancuso, a veteran of the era’s sitcoms like The Nanny, Ellen, Friends, and Dharma & Greg.

The show is headlined by Kurtwood Smith and Debra Jo Rupp, both reprising their roles from That ’70s Show. On top of the 200 episodes of That ’70s Show, both have other sitcom experience. Rupp was a recurring guest star on Friends, as the sister-in-law of Phoebe Buffay (Lisa Kudrow). Kurtwood was a regular on Worst Week, a short-lived show that followed Two and a Half Men on CBS. The pair know what they’re doing backwards and forwards, and it’s fun to watch professionals work.

However, as satisfying as this is to watch, it also gets at the strangeness of the nostalgia at play in That ’90s Show. Oddly enough, That ’90s Show never feels particularly nostalgic for the decade in which it is set. Sure, there are elements drawn from the 1990s. Gwen’s (Ashley Aufderheide) entire personality comes from skimming The Riot Grrrl Manifesto. Brian Austin Green has a winking cameo of himself as Leia (Callie Haverda) dreams of Beverly Hills, 90210. However, it’s fairly shallow. That ’90s Show doesn’t really have much to say about the decade in which it is set. In one episode, Red (Smith) buys a massage chair. In another, Ozzie (Reyn Doi) helps introduce Kitty (Rupp) to the internet. In an early episode, it is revealed that Jay (Mace Coronel) works at a video store, but the location is never revisited. That ’90s Show never seems as intrigued or engaged by its turn-of-the-millennium setting as That ’70s Show was by its own era.

There are perhaps multiple reasons for this. Cultural critics like Kurt Andersen have made the argument that cultural markers like fashion froze during that decade. There’s a much greater difference between 1970s fashion and 1990s fashion than there is between 1990s fashion and 2020s fashion. As such, it’s neither as easy nor as fun to use a show from 2023 to mock the trends and happenings of the summer of 1995 as it was to ridicule the aesthetics of the 1970s.

There’s also a broader sense of the nature of that nostalgia. The 1970s were a very turbulent time in the United States. That decade, the country had to deal with the legacies of the Vietnam War and Watergate. There were constant financial crises. From the relative peace and prosperity of the 1990s, it made sense to look back at the 1970s with a sort of bemused detachment, to laugh at it because the alternative was probably to cry.

In contrast, the 1990s are generally presented as a much more romantic era. The country would still occasionally involve itself in foreign wars, but they were mostly contained. The economy was booming. America was peaceful and prosperous. Hindsight obscures a lot of the social and political strife of the era, creating the sense of the decade as a lacuna between the end of the Cold War and the start of the War on Terror. 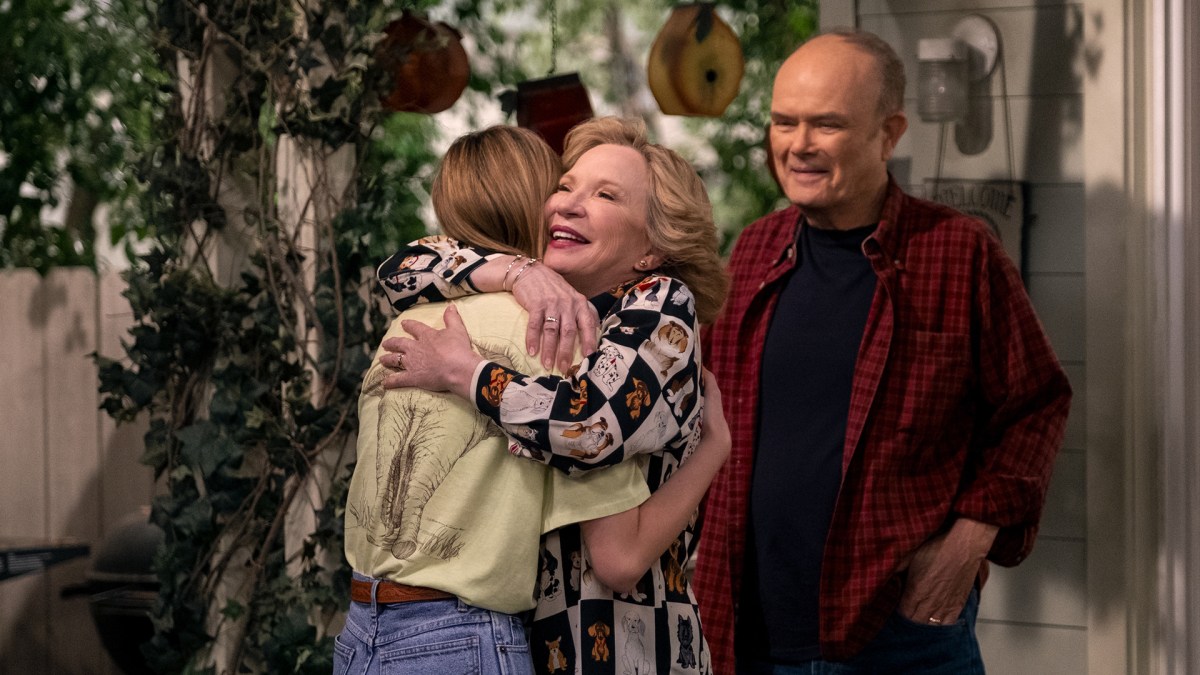 That ’90s Show exists in that romantic space. While broadcast television will often synchronize episodes to their scheduled air date, featuring holidays like Halloween, Thanksgiving, and Christmas in their appropriate months, the 10 episodes of That ’90s Show unfold across the summer of 1995. Despite the show releasing in January, Independence Day is a major plot point in the season premiere. It exists in a limbo quite apart from the “live” sensibility of the shows that it emulates.

For Leia, the show’s protagonist, these 10 episodes represent an idyllic and perfect escape from her mundane life. Leia lives in Chicago with her parents, That ’70s Show cast members Eric Forman (Topher Grace) and Donna Pinciotti (Laura Prepon). Visiting her grandparents in Point Place, Wisconsin, Leia finds a very different pace of living. She doesn’t have to worry about being uncool to her friends or disappointing her parents. She can just be.

It’s tempting to wonder what the intended audience for this show is. Allowing for Rupp and Smith, That ’90s Show isn’t a full-on revival. Instead, the regular cast is composed primarily of the children of the various leads of the original show, and their drama drives the larger arcs of the season. However, the show keeps bringing back old cast members as guest stars who end up dominating their episodes, even if none stick around for the full season. 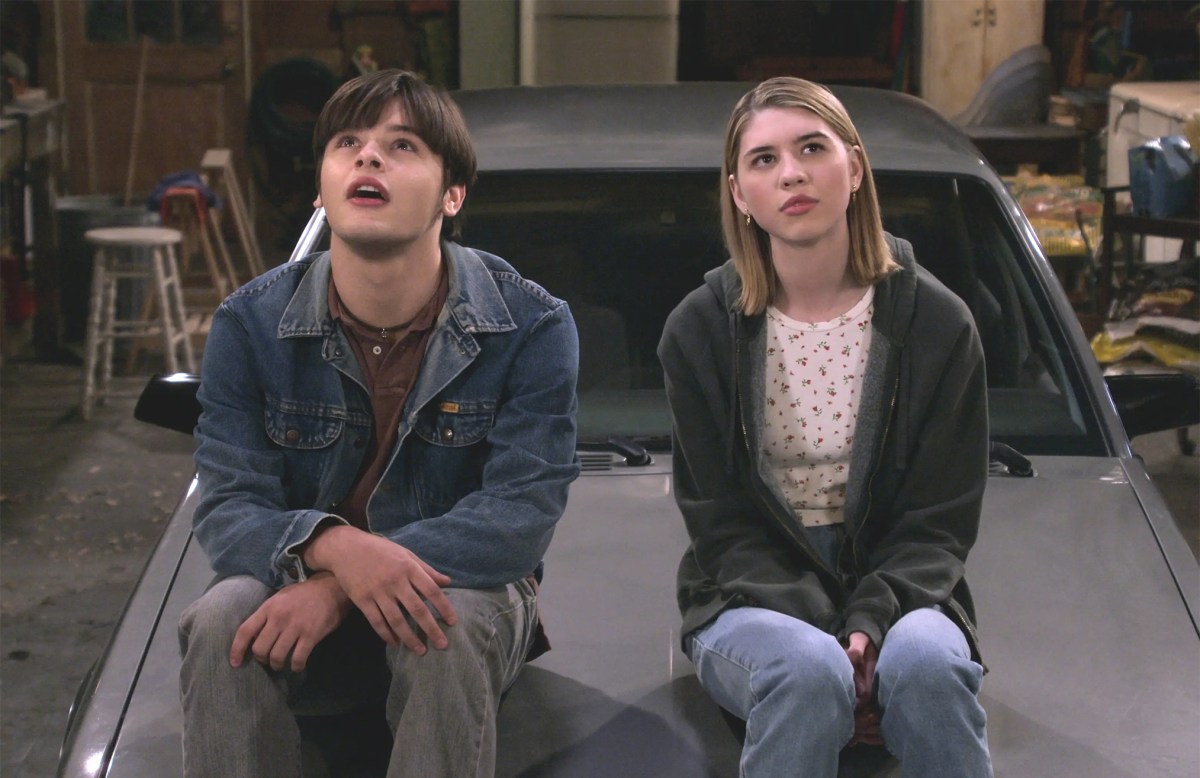 It’s a strange combination. The season finale finds Leia navigating weird feelings for her summer boyfriend Jay and his best friend Nate (Maxwell Acee Donovan), but the episode’s secondary plot focuses on original show star Fez (Valderrama) resurrecting an old conflict with original show recurring guest star Fenton (Rash). It’s a bizarre choice, to give up so much real estate in a season finale to an entire subplot built around characters who aren’t even regulars on the show.

Then again, there is perhaps a grim cynicism at play here. It feels like Point Place has never really moved on in the decades since the original. The kitchen wallpaper is the same. The basement is decorated with many of the same distinctive props. The 2023 sets of That ’90s Show are identical to the 1998 sets of That ’70s Show. The artificial 1995 of That ’90s Show is a perfectly preserved museum to the 1976 of That ’70s Show. It’s a hall of mirrors. It’s turtles all the way down.

In the world of That ’90s Show, children are destined to be trapped by the nostalgia of their parents. Leia is named for her father Eric’s love of Star Wars, and That ’90s Show is set two years too early to capitalize on the theatrical re-release of the trilogy. Leia is a socially awkward nerd, like her father. Jay is a vapid hunk, like his own father, Michael (Kutcher). Nikki (Sam Morelos) is even the mean girl of the group, like Jackie (Kunis) was in the original show. 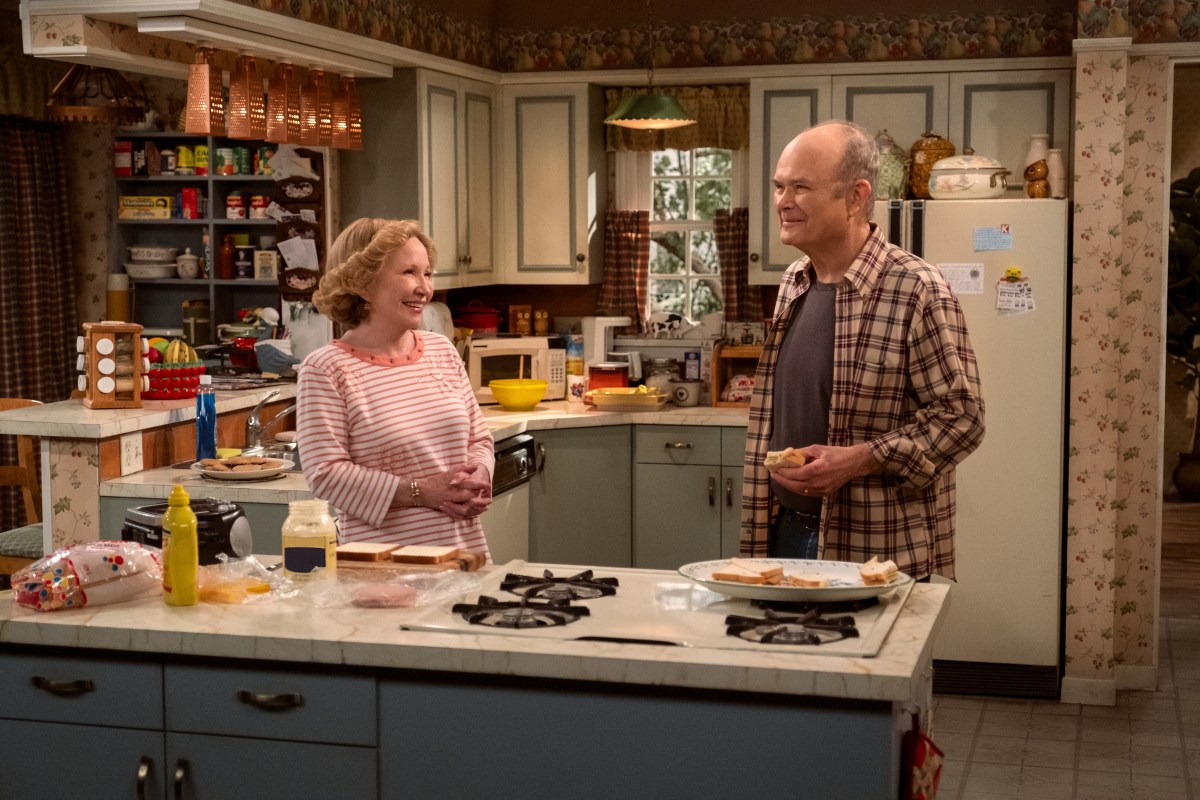 The kids in That ’90s Show hang out in the same basement their parents did. They don’t try to make it their own. Despite sharing the space for months, and the sense that neither Red nor Kitty has any use for it, the basement never shows any sign of these kids’ personalities. Nobody replaces (or even supplements) the battered Queen or Jefferson Airplane posters that hang on the walls. Although the show uses the original’s distinctive “circle” motif several times, it never does anything new.

There’s a melancholy to all this. In the finale, Fez joins the kids to smoke some weed in the basement. “I miss my people,” he laments, before the show cuts back to archive footage of the original cast. These kids only exist as a necessity, a vehicle through which this nostalgia might flow. At the end of the season, Kitty has a panic attack because Leia may not come back the following summer. But that’s not out of concern for Leia; it is concern for her own relevance.

The season finale is titled “Kids in America,” and it plays out with a cover of the song from The Muffs. It’s a choice that captures the recursive levels of nostalgia within the show. Kim Wilde’s original recording, released in January 1981, signaled the arrival of the 1980s and the end of the 1970s. It’s chasing the memory of the feeling of a memory. It’s as artificial as any of the show’s three-walled sets. That might be why it fits so perfectly.