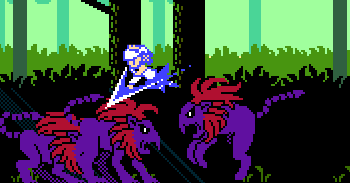 Japanese publisher Atlus has made available on their website a simplistic, retro demake of Vanillaware’s 2D action platformer, Odin Sphere, to publicize the recent release of Odin Sphere: Leifthrasir in Japan.

It’s a very little thing, but one that basically reflects the action gameplay of Odin Sphere. The player controls a little sprite-based Valkyrie in a flat, horizontally scrolling stage as an endless stream of enemies (which become progressively more difficult to kill) passes through it. In addition to moving left and right, the player can jump and has two attacks, a basic swing and a more powerful downward thrust executed from the air. As enemies are killed, experience points and levels are earned, increasing the amount of health and damage the player has.

There don’t seem to be a lot of enemies in the game, based on a few plays, with two types that keep coming in with palette swaps and minor sprite changes to indicate enemies that can take more abuse. One of the enemies does have some variance in its pattern, and there are a couple other surprises tucked away in there (try not killing anything and see what happens).

It’s not fancy, but still a cute thing to while away a few minutes on. Odin Sphere: Leifthrasir itself is scheduled to release in North America on June 7.